Kontinuing with The Kinks and with reference to last night's video... 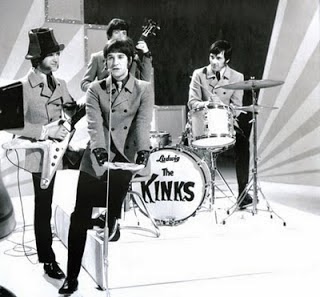 ...by 1965, Ray Davies had moved front and center for the band's stage presentation.

Two other things: First, note how the other band members rise on scissors jacks behind and above him, in direct contrast to what was happening within the band in real life.


I used to play a Guild custom built guitar and the airline lost it on our first American tour in '64 or '65. ... I had to get a replacement quick. I went into a store and they didn't have anything I liked. I saw this dusty old guitar case and I said 'What have you got in there?' he said 'Oh, that's just some silly old guitar.' He got it out and I bought it for about $60.

Green Day did a cover of "Tired Of Waiting" which has remarkable fidelity to the original: link
Posted by chickelit at 9:21 PM

OK, for a week (2?) I have ignored the highway shooter news. Besides, I'm kind of done with Steven King stories anyway.

Crack!!! What shall I do with my hand? I try to be good but it has a racist mind of its own. Do I need to cut it off? That's kind of a Moslem way of handling such crimes. Should I send a check to someone instead, as a reparation?

1775 – American Revolution: The British advancement by sea begins; Paul Revere and other riders warn the countryside of the troop movements.

The British are coming.

The eighteenth of April in '75
and hardly a man is now alive
who remembers that famous day and year.

Great Kinks song, but as far as the Green Day, I'll just re-post the current top comment over there:

"I like grren day, and I certainly respect that they are Kinks fans, but this is just kind of a karaoke cover.﻿"

I love karaoke. People (neighbors) have said I'm gifted at it.

Hmm - gifted at karaoke, eh? I guess that's good. Never been to a place where karaoke occurs, so I shall suspend judgment for now.

I could see you doing that song in an Orson Wells voice - so tired, but we will sell no wine before its time, and so on.

That could only improve upon the original.

I liked the Kinks back when they were new - had several of their albums. But they wandered off into strange realms and I soldiered on with the Stones and their ilk, right up until '72 when I chucked the whole pop music scene and started listening to classical. And bluegrass. And classical bluegrass.

When I bartended in Madison a tranny used to come into the bar on occasion. I had the jukebox guy put Lola in there and I would play it whenever he came in. He never got it but all the waitresses and a few customers did.

Sixty, There was a bluegrass festival in Durango last weekend when we were there. Heard some good music. The only music I listen to while driving is classical XM stations 75 and 76. I'll listen to some opera also.

Chick, that you would rock at karaoke comes as no surprise at all.

I've never done karaoke...take note...karaoke at the meetup!
I will entrance and disturb you all with my rendition of Stormy Weather :)

When the wind blows our barge will go.

It's a mixed up, muddled up. shook up world as Chicken a al Rey recently wrote elsewhere.

I had forgotten that was a Kinks song.