This took me far too long to figure out what twitter users were on about. The logic on twitter is fractured and scattered, what there is of logic. To our tremendous embarrassment our State Department imagines twitter hashtags will have any affect whatsoever on Russian actions. This is their sense of enlightened diplomacy.

The State Department's idea is to spread awareness of the situation in Ukraine, this while Russia masses on Ukraine's eastern border.

That would be spread awareness among Twitter users, no? 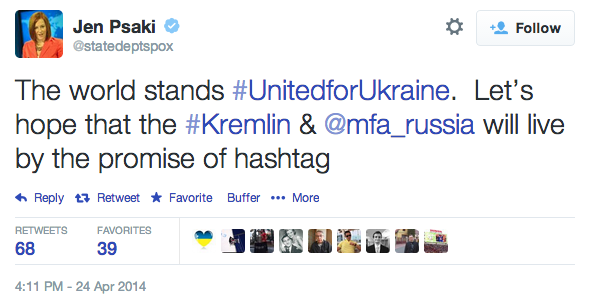 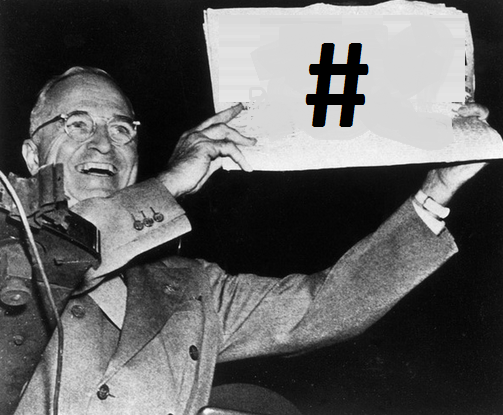 Although I'm not sure how Dewey/Truman newspaper error has anything to do with it, that was the confusing part, but sill kind of funny. Others more apposite than this and more snarky. Here are a few in plain text stripped of confounding Twitterese:

"We will Hashtag you !" Khruschev at the UN.

Has the hashtag been voxsplained yet?

Maybe it's just time to defriend Russia and ignore their texts?

The right to bear #hashtags shall not be infringed.

Jay, Adams, Seward, Hay, Acheson, Dulles... Our great past Secretaries of State wish they could come back to pimp slap Kerry right now.

The hashtags are going out all over Europe - English Sec Grey at the start of WWI.

if you outlaw #hashtags, only outlaws will have #hashtags

Obama promised that we would beat our blogs into ploughshares; now he wants to escalate into a flame war.

And so on. I am so proud to be American right now. That whole 'world's policeman' thing was getting old. Our legacy squandered.
Posted by Chip Ahoy at 5:40 AM

Is # the new reset button?

Jen Zsaki is a bit like Biden. Arrogant and dumb.

Just about spewed my AM coffee at the thought of Putin worrying about losing a flame war on Twitter. Too funny.

TC, you make me imagine Putin spewing his coffee over the quoted tweets.

No wonder Putin thinks the internet is a CIA plot.

If Putin moves on Moldova, we escalate to Facebook poke.

Should the US poke Putin before or after unfriending him?

Haz, I have no idea, as I don't do Facebook. Can you poke someone that isn't a friend? If you have to be friends to poke them, that suggests the next stage of escalation after poking, though.

(All this talk of pokes has me thinking of Lonesome Dove, though I'm pretty sure a Facebook poke and a Lonesome Dove poke aren't the same thing.)

Putin charges over half of Obamas followers are either dead or straight up fakes, Acorn operatives or Chicago transients.

Those are great, Lem.

Ice, maybe we should get on Facebook...they might come for the non-Facebookers first.