"In a joint appearance, Chelsea and Hillary Clinton announced Thursday that Chelsea is expecting her first child later this year." 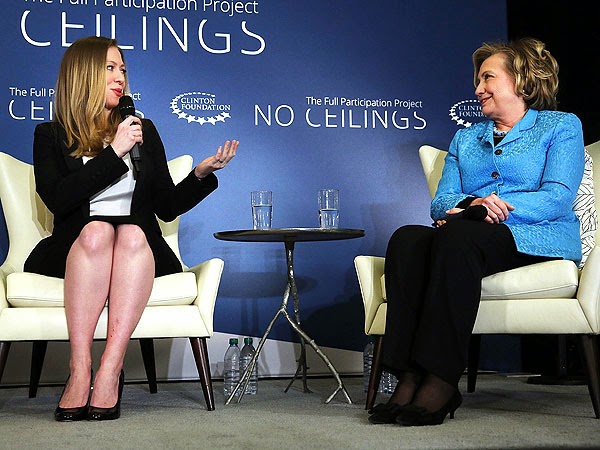 “Marc [Mezvinsky] and I are very excited that we have our first child arriving later this year, and I certainly feel all the better — whether it’s a girl or a boy — that she or he will grow up in a world full of so many strong young female leaders, so thank you for inspiring me and thank you for inspiring future generations, including the one that we’ll be lucky enough to welcome into our family later this year,” Chelsea Clinton said. “I just hope that I will be as good a mom to my child, and hopefully children, as my mom was to me.”

"According to David Haig, an evolutionary biologist at Harvard, babies don't want additional siblings competing for their parents' love. "I'm just suggesting that offspring have evolved to use waking up mothers and suckling more intensely to delay the birth of another sibling," said Haig. He encourages parents to train their babies to sleep through the night."
Posted by Lem at 7:58 AM

A Clinton baby. The perfect gift for a fawning media.

We don't need to talk about Benghazi or the 6 billion that went missing at the State Department under Hillary's watch anymore.

Remember when the media gushed non-stop over the Bush grand baby? oh right. Well hang on.

I'm so sick of women whining that they want more shit. Why don't women ever feel any shame over their greed?

We've been kissing the women's asses my entire life.

We needed a study to discover that babies cry to manipulate their parents?

When I glance at the leftists at TOP - all the greedy takers seem to be male leftists. I know it's a small sample, but never underestimate the greed and insatiable need for wanting more shit (like a great centrally controlled society) from the male side.

Well, I certainly hope that her pregnancy produces a healthy child. However, what if they find out that the child has Down's Syndrom? What on earth would they do then?

So, we're all greedy whiners, but we whine about different shit?

I cannot get my thoughts straight this AM. try again.
@ST - All I am saying is that lust for free stuff and centralized planning is ideological. And, I think, for the most part gender neutral. I will agree though, the scales are slightly tipped in favor of single women when it comes to desire for government sugar.

PS If you want a laugh, go right now to Drudge and take a look at the picture of Hillary.


What I will never get over is that if It weren't for that little turd Ross Perot, we'd all be saying - Clinton who?

Congratulations to the couple — I hope it's a healthy baby and a smooth pregnancy.

Ugh. Sociobiologists, substituting "just so" stories for experimental evidence since 1975.

What I will never get over is that if It weren't for that little turd Ross Perot, we'd all be saying - Clinton who?

Never forget Willie was a genuine Lefty slacker with street cred as a campus commando.

Once the media fastened on him, they never let go.

Ross Perot took 19% of the vote. Don't need to re-litigate Bush sr. and his imperfections, but Perot was the clear spoiler. Clinton would be a big nobody if it were not for Perot. Bill won a plurality but not a majority.

Never forget Willie was a genuine Lefty slacker with street cred as a campus commando.

He also co-opted a lot of Republican ideas, much to the chagrin of his more progressive pals.

And at least, I think the man understands America.

Bill's move the center is somewhat mythological. He was dragged kicking and screaming into welfare reform. He never would have touched it had it not been for losing the house and senate. People also forget the Clinton tax hikes. At the time, our booming tech economy absorbed the hit, but those tax hikes ultimately led to an eventual cool-off. Under Obama, we have now returned to the Clinton era tax hikes and the economy is sputtering and far from a real and sustained recovery.

He may know how to con some people, but the media saved his ass as much and as often (if not more) than they ever saved Choom's.

Besides, all that "co-opting" was more Dick Morris' doing than Willie's. Morris kept him in office and out of jail for 4 years from 94 - 98.

Well, I wish her well and hope that she has a healthy baby.

But really? We are supposed to care about this.....why. Our political figures are not royalty. We don't have a line of succession of little princesses and princes.

So other than the normal thoughts of be happy and have a healthy child, I hope to never hear about this again.

AllenS has it right. Karma may come and bite them in the ass (so to speak) with a less than optimal baby. What will they do then. Do we get to speculate as much as the press did about Palin's vagina and her children? Hmmmmm?

While there is always risk, I doubt Chelsea will have complications. She will hopefully deliver a healthy baby. That said, Autism is on the rise. 1 in 68 children. What I have read is that risk factors for spectrum disorders increase with age of parent. Chelsea is only 34.

But oh goodie - we will get to hear about it. Hillary isn't likeable and this will help the media make you think that Hillary is likable.

According to David Haig, an evolutionary biologist at Harvard, scholars will often make things up to get in the news in order to keep other, more productive, scholars from getting attention.

Of course not, that would mean he had been rong about something.

Messiahs, even when they're taught to spell by Halo Joe, are never wrong.

If Hillary really wants to energize the base, she should make Chelsea have a late term abortion. Perhaps Gosnell could be granted a pardon and perform the procedure. Sure fire vote winner.

Chrissake, I hate the Clintons. Take all the shots you want @ them but I pray the kid is healthy and happy. And, that he/she is not brought up a vegan!!

God bless her and I hope she has a happy and healthy baby. Also that the Clintons enjoy being grandparents.

If there is any justice they will have a little granddaughter.

Hopefully in twenty years from now her boss will stick a cigar in her twat.

AllenS has it right. Karma may come and bite them in the ass (so to speak) with a less than optimal baby. What will they do then.

Trooper ... about that cigar, LOL.

I wonder if Andy Sullivan will ponder the possibility that it's really Hillary's child.

Perhaps David Letterman will suggest it's actually the product of a rape by a famous baseball player.

Do you think Chelsea had to cry at night to keep her parents from having sex? (with each other, I hasten to add).
Oh, that was unworthy I denounce myself not really.
I don't really have issues with Chelsea. She's probably a nice person and I hope she and her husband are happy in their family life. I just hate the media gushing over and covering for any High Bureaucrat and their kin (see, e.g., recent Jay Carney article) and the C.V. by nepotism and also the pretentious cat-naming as a signifier for great intelligence. Same goes for that odious Ronan Farrow who makes me like Woody Allen for reasons other than his early movies (like, no wonder he lived on the other side of the park from this brood of precious snowflakes).

ST @ 8:18
Maybe bear in mind that the conservative and/or libertarian women, and maybe (just maybe) some of the lefty ladies who post here are sick of the bullshit WaronWomen whining as well. Consider (it's just a suggestion) narrowing your scorn to the people who actually deserve it.

What I want for Chelsea Clinton is what I wanted for Bristol Palin - that the press, the haters, the internet, radio and television cynics just leave her alone. Respect that she didn't choose her parents.

The MSM will leave Chelsea Clinton alone - if she wants it. They didn't leave Bristol Palin or the Bush girls alone.

Unlike MH, I see no equivalency. CC of course loves and has asked for the media attention. Does anyone really think poor little Chelsea wants to be left alone?

I see no evidence that Chelsea is any better than her parents, one of whom is setting herself up to once again occupy the White House.

So, its too late. Its open season.

I see no reason for us to be Little Lord Fauntleroy while the liberals play Darth Vader.

@Trooper - I hope someday her boss does NOT place a cigar in her twat.