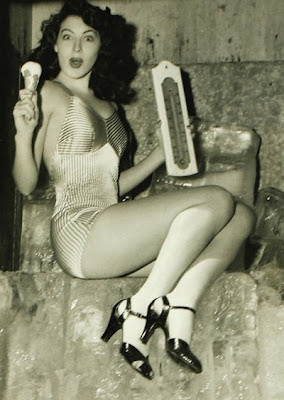 I'm sure Trooper knows. And I'll bet Ed does, too.

*A blog post in the style of Trooper York
Posted by deborah at 9:00 PM

How wide is her vagina?

I still cant get that song out of my head.

John, go listen to Night Fever. That should eradicate it.

Is that Beverly Lynne's older sister? If so how did you know that??

No, something of a private joke.

Deb, theirs a whose that girl tag. :)

I'm not certain, but it sort of looks like she just farted.

Lactose intolerance is such a drag.

April, lactose intolerance is no excuse. And back then they called them stinkers, I think...

I read once that when she was married to Frank Sinatra, and they were poolside with a group of friends, he said something she didn't like. Maybe about her behavior. She then stripped naked, climbed the diving board, and executed a perfect swan dive. Or maybe it was a jackknife.

She then stripped naked, climbed the diving board, and executed a perfect swan dive. Or maybe it was a jackknife.

What a stinker! She showed him.

Apologies, chick, you did come up with the tag idea first :)