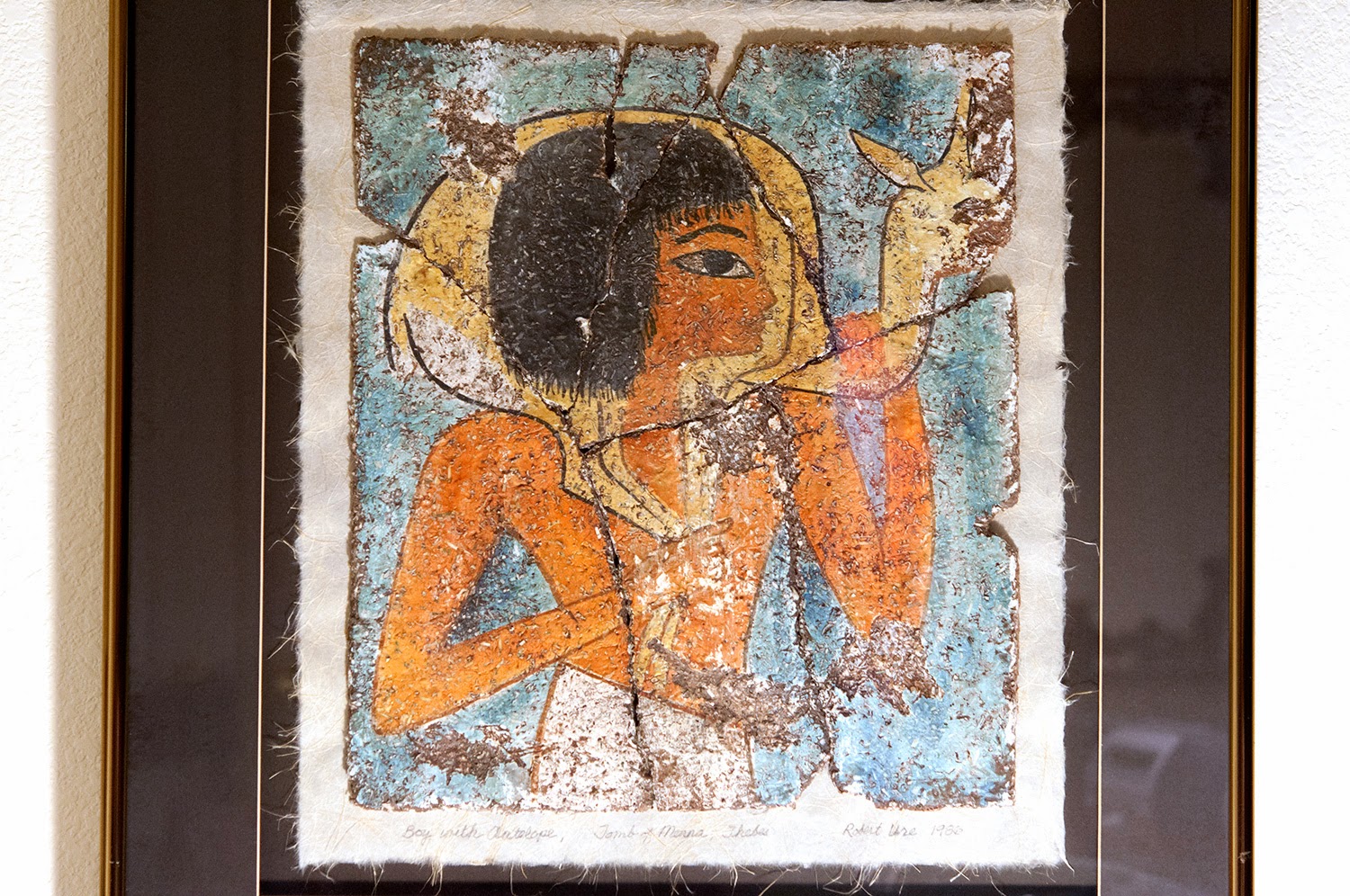 This one I painted for myself.

Egyptians used hay in their plaster to help bind it. Usually the under layer of plaster applied to the walls to smooth the roughly hewn rock then covered with another smoother layer to paint on. I think. I tried hay, for authenticity,  and it doesn't work for so well for me, I tried various fibers and of all the substances tried it is shredded currency that works best for me.

The currency is shredded at the FRB in huge piles by a tree branch chopper affair, but larger and made for this purpose, and by two double control teams of four people total. Two people working and two people watching all pulled from different departments. The crew is selected randomly from among selected employees.  I was on that crew several times. The operator must stand elevated on a platform to reach the large slot to receive the bundles to chop. They are not shredded as regular office shredders, rather, the bundles are chopped into tiny bits. There will be no reconstruction possible. The denominations can be anything, 1's, 5's, 20's what have you. The bundles destroyed previously carefully counted by similar control teams. The counting and confirming teams are one of the more unhappier tasks. Nobody likes to be chosen. It is amazing how many times some of the bundles must be recounted. Watching counters is the most trying tasks of all. The amounts are quite large, say a dining room table covered to two or three feet high with money.

The Building Department crew cleans out the giant shredders. One of the Building Department employees, a friend, they're all friends, gave me a bag. A large bag.  A bag the size that is stuffed into a xerox box that holds 10 reams of copy paper, a veritable lifetime supply of shredded currency.

This painting has too much shredded currency mixed with the plaster. I went a little overboard there, so the surface is fuzzy and not so easily painted. All of it is guess anyway, water to plaster with currency. Each pour is different.

The novelty of using currency this way tickled the people who work there. The FRB Denver  bought two of my paintings and wrote about currency inside for their newsletter. The head office in K.C. picked up on the item and they published a story as well in their own district-wide newsletter and this is how I became somewhat famed there, and also deemed somewhat unfit for FRB temperament, or otherwise some sort of oddity.

The paintings they bought are hung in a meeting room and thereafter I could not focus entirely on any meeting in the room for being distracted by my own art, criticizing it mentally, making adjustments and thinking, "I can do better than that next time, look the feet are different sizes"

I stopped by the Arby's nearby for a sandwich when a dark filthy man approached my table for a handout. I happened to be loaded with bills at the time. I did not want the panhandler to see inside my wallet as I removed a bill, he standing and me sitting so I turned to the side while I rifled the bills. I could have given any denomination, I pulled out a fiver and gave it to him. He reached out with the dirtiest hands I have ever seen in my life, filthy with ground in grime, and if he was actually hungry then that bill would go right into Arby's cash register and I cringed at the thought.

Now because of that I don't want to touch currency. It's become a thing. The thought of sticking my hands in the bag of shredded currency to remove a handful frankly gives me the creeps. I should probably spray it with Lysol before reaching in.

And then I looked at my ticket and noticed the total was $8.something, and thought, that 5 I gave him isn't even going to cover a simple meal. Then I felt bad.
Posted by Chip Ahoy at 11:20 PM

This one I painted for myself.

Not giving it away ha?

I have a childhood friend who paints, is a painter/hairdresser, and he has personal favorites that he will lend to other friends, but he will never sell.

Chip, your story of the fibers in the plaster reminded me of an old anecdote I once heard about US patent law. I can no longer locate the source, so I'll have to paraphrase.

A company or an inventor applied for a US patent on what they alleged were novel bricks comprising a high tech fiber embedded in the brick to give them added strength and resilience against breakage and fracture. Clay and ceramics, while able to bear great loads, are susceptible to cracking. The inventors thought their idea was so novel that they claimed broadly.

The patent examiner rejected their claims as obvious under the appropriate statute (35 USC § 103) and cited the Bible as prior art. There's a description in the Bible somewhere of Hebrews baking straw into their bricks for added strength. Some ideas are really old.

I bet that reapplying for that patent would succeed with the right applicant, or a few tries from anyone. I've seen very obvious patents not only granted but successfully enforced. On the other side I've seen very specific and novel patents ignored. It really is a crap shoot so much that after getting many patents in the 80s, I completely gave up on the idea as a protection. It just isn't worth it unless your idea is worth many millions and your time is not. Life is too short for patents. Every patented product I ever developed was copied in China and sold here.

Has anyone ever tried to piece together the fibers in an ancient Egyptian painting? Maybe if you pieced them together they would turn out to be shredded scrolls of great value destroyed by Pharaoh's slaves in similar fashion.

Chip, are you a money launderer?

Old currency into something beautiful that hangs at the currency department. I love it.

Money is gross. Why just the other day I was at the Safeway check out lane. The checker gal was wearing gloves. She sorted through the one dollar bills, looking for a few that were not, in her words, so disgusting. I thanked her.
The public - icky.

As I scrolled down and the painting was revealed, I was smiling. Beautiful.

Not for nothing is it called filthy lucre.