Oops he did it again...and it wasn't even to Britney! 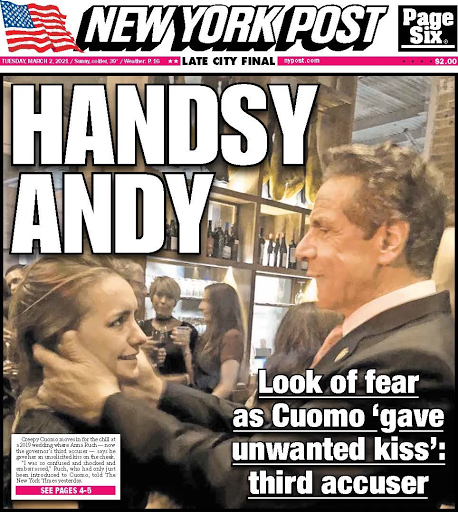 The Luv Guv with the nipple rings got caught at it again. From the New York Post

'Ruch, a former member of the Obama administration and the 2020 Biden campaign, said she met Cuomo at the crowded wedding reception in September 2019.

Within moments of being introduced, Ruch claims, the gov put his hand on the small of her lower back, which was exposed in an open-back dress.

“I promptly removed his hand with my hand, which I would have thought was a clear enough indicator that I was not wanting him to touch me,” she told the Times.

But the governor apparently didn’t get the hint.

He allegedly noted that Ruch seemed “aggressive” — and then placed his hands on her cheeks and asked if he could kiss her, loudly enough for a friend of Ruch’s to hear, according to the report.

“I turned my head away and didn’t have words in that moment,” Ruch said.

Ruch said she was so shocked, she had to ask a friend whether the gov’s lips had actually touched her face as she was pulling away. She was told that he kissed her cheek.'

It looks like the long knives are out for Nipple Boy as he is no longer useful to the communists who run NYS. They needed him as a plausible foil to Trump. Just as Clueless Joe Biden was an old white man with supposed blue collar appeal. Now they are going to jettison him to get a POC POS in there.

Couldn't happen to a nicer guy.

Labels: Fredo, Vote for the homo not for Cuomo

Fredo the First broke the cardinal law of office relationships. Be Handsome! Those nipple rings may actually be propellers.

She sounds like she wouldn't have minded if it was the Hildabeast.

Regardless, the Demos want to dump him, mostly be because he and Newsom have become the faces of the lockdown, but mostly because he killed Grandma.

And they say the Left controls the news.