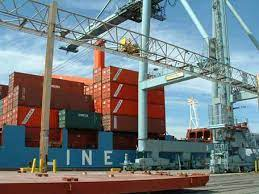 When I was a kid growing up everything revolved around the docks. I might have told this story before but I am an old bastard so I like to repeat myself. You see my uncles worked on the docks like 99% of the people in the neighborhood. Everything revolved around the docks. The restaurants catered to the longshoreman. The stores carried working mans clothing. They even sold stevedore hooks. Then there was all the stuff they stole that fed the economy.
You see they would drop a crate off of the shit and when it broke they would take everything out. The crate would go to the coopers who would fill it with rocks and repair it and send it off to Kansas or wherever. Then they would go up and down the neighborhood and sell whatever they had. Dresses. Watches. Tools. Whatever. You could get some great bargains. Ten cents on the dollar.
Then they invented the container. Everything was in these huge metal boxes. No matter how high you lifted and dropped it ....well it just didn't break. It went right off the ship onto the truck. They had to build these big cranes to lift the containers off the ship. So they moved the ships out to Jersey or Howland Hook in Staten Island where they had room to build the cranes. Plus they needed a lot less people. It wasn't like an ant hill with hundreds of guys carrying sacks and crates. It was just a couple of crane operators. The union had to go on strike to get a guarantied wage for some of their members. Which they did. They closed the books since they needed so many fewer guys. It was a bloodbath.
Almost all of the longshoremen moved out to Staten Island or Jersey. Over the Guinea Gangplank and out of Brooklyn. To be replaced first by yuppies and then by hipsters. Now there is nothing left of a 150 year old culture. It's all gone.
So I don't care if a container ship sinks. I hope they all sink. We should buy American and only American. America First. Last. Always.
Posted by Trooper York at 7:40 PM

As you say, they made a living stealing stuff. The guys who were in business found a way to stop it.

The union guys killed the goose that laid the golden egg.

They did it to themselves. Justice.

Sorry, on this one I can't agree.

On the Waterfront was in Hoboken, but the containers moved to Newark Harbor.

I'm w/ ed on this. I've saw unions kill a successful factory in my home town.

If it's not the wind, it's those dang fang, slippin' rippin' containers doing their thing to steal jobs and prevent hard-working Americans from taking their fair share of stuff that doesn't belong to them!!

Interesting story about life in the dockyards in the pre-container era. It left me unclear, however as to how the Doings back then differed from the looting and shoplifting that took place during the more recent Peaceful Protests of 2020.

I gained a better understanding of the value of voice, clout and organized representation when I worked for a while in a well-known restaurant in Eastern MA that was owned by a Greek immigrant couple. They misused and exploited their help in order to make things run and earn themselves piles of money. If there'd been a union to join back then to take them on, I would have done so.

On our one big trip to the Southwest, we drove through both Tucson and Albuquerque. The Blonde didn't care for either.

If there'd been a union to join back then to take them on, I would have done so.

That's why the unions were needed.

Once the crooks got in, they should have been abolished.