On Contained Goods, Gusts of Winds and the Ever Given Nature of Things,

Early reports speculated the vessel suffered a loss of power, but the ship's operator, Evergreen Marine Corp, told Agence-France Press:  "the container accidently ran aground after a suspected gust of wind hit it". 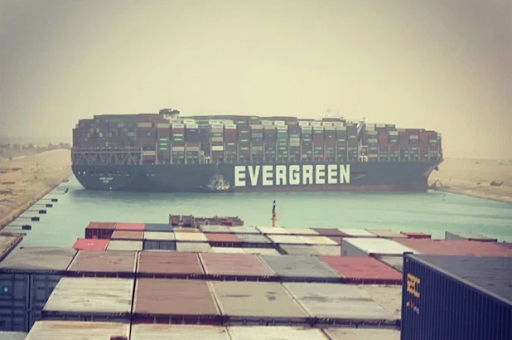 Another massive containership of goods ran into trouble Tuesday.  The Ever Given, a megaship longer than four football fields, ran aground and became stuck sideways in the middle of the Suez Canal.  Headed to Rotterdam from China, it's currently causing a huge traffic jam, with ships backed up on both ends of the canal awaiting passage.  According to The Guardian and NYPost, attempts by small Egyptian vessels to free it have been so far been unsuccessful along with efforts to refloat it.   The ship, built in 2018 is one of a new category of ships called Ultra Large Container Ships (ULCS) some of which are too big for the Panama Canal.  On the right bank a tiny (by comparison) digger can be seen working to free it. 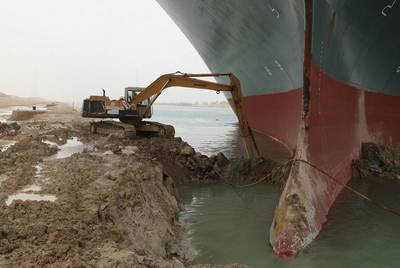 The backlog can be viewed here on Vesselfinder.
Twice in one week, the wind, which blows where it pleases, has felled the mighty, or at least caused unusual spectacles that are hard to ignore, both with international consequences.
Note:  There's now a Is the Ship Still Stuck? website
Posted by MamaM at 4:33 AM

Ever Given vs. Evergreen. Who ya gonna believe, the internet or your own eyes?

I didn't know that they let Chinese women operate vehicles that large.

Oh, Sixty, what you don't know! It was the wind, I tell ya, the wind. The rippin' slippin' dang fang rotten wind.

From a favorite Calvin and Hobbes:

Psst! Are you awake? Of course. I haven't heard Santa yet, have you? Do you think he's coming? It's only 11:00. We maybe later on the route. Thump? Gasp, did you hear that? It's him! It's Santa! Shh! He's saying something! Slippin' rippin' dang fang rotten zarg barg-a-ding dong! Quiet dear! Calvin will hear you!

That was a good comic strip. I guess ol' Waterson made enough money and just walked away. I sure miss the level of brilliance he brought to a simple art form.

This tracks with previous mention of the replenishment problems starting to show up in stores selling hard goods.

"We have a literal bottleneck in the Suez Canal today," Federal Reserve Chair Jerome Powell said during a Senate banking hearing Wednesday morning.

The blocked ship is another straw on the back of a global shipping system already broken by pandemic disruptions, Jensen said.

“This takes capacity out of a system that is already starving for capacity,” he said.

While there may have been wind involved, something else went seriously amiss.

Sherine Naggar, head of the Naggar Group of companies and a marine engineer by education said that Ever Given’s height makes container removal difficult and unlikely, and a large amount of ballast water would need to remain onboard to stop the vessel from capsizing.

Naggar claimed that Ever Given is aground by 15 metres, a significant distance and out of the ordinary for groundings along the Suez Canal. In normal operation a ship’s hull is supported by water all around, but Ever Given is currently supported by tidal waters at the stern and mud at the bow.

“You can never tell what kind of stress distribution there is on the hull when you have a grounding,” said Naggar. This is the reason so many tugs are involved in the recovery effort, said Naggar, to avoid concentrating stresses from recovery efforts on one part of the hull and potentially causing it to fail.

Responding to claims that large container vessels with high stacks pose an increased risk of grounding, Naggar said Ever Given was nothing new in terms of size and windage for the canal. “We’ve had the largest container ships with 24,000 teu completely chock-full transiting the canal in high winds and nothing happened. For this particular ship it must have been a technical error.”

Naggar said that, going from his own experience, the nature and angle of the grounding suggested a technical issue on the vessel, although Ever Given’s Technical Manager Bernhard Schulte Shipmanagement (BSM) said in its updates that “initial investigations rule out any mechanical or engine failure as a cause of the grounding.”

Thanks for posting the link to the shipping site. I was able to zoom around and find where my brother was stationed - Sharm Al-Sheik. I had no idea that's where that was located - somehow I imagined it was at the northern end of the canal. He was part of the trip wire - when war started he was the first one on the scene. Good times.

As for the difficulties driving that ship - I don't think you have to be much of a conspiracy theorist to think that something else is going on - ships that large don't get sideways in an instant, and they have some sophisticated equipment to prevent that from happening. So when that person started 'splainin' the story all I would say would be "Naggar, please!"