I am getting really tired of all of these sex scandals. 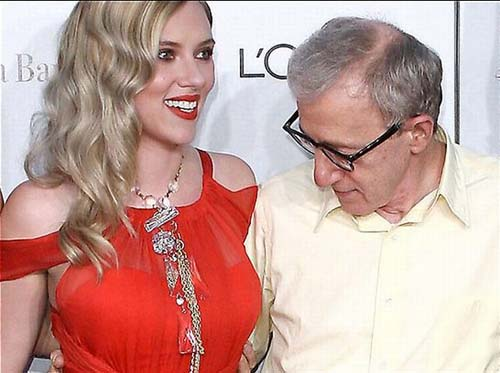 There is a new documentary about Woody Allen and his molestation of his daughter A tedious rehash of old charges and the bitter ranting of Mia Farrow who still hasn't gotten over the fact that he dumped her ass for her rent a daughter. I mean that was decades ago. Who gives a shit anymore.

Now that Roman Polanski is President of France and Andrew "Do you date Older guys" Cuomo is skating from his molesting of aides while he works at killing your grandma in the nursing home who really gives a flying fuck. Democrats and liberals always skate unless they use their usefulness so they have to stop with the moralizing feminist clap trap.

I do have one suggestion for Woodie.

Stop staring at her tits.

Labels: Me Too, Stop staring at my tits

Phony sex and race scandals is the only thing in the "news" anymore.
Lord knows they can't talk about Biden. Or "Biden's" policies. Or actual reality.
Or facts.
So we're getting a lot of race bread and sex circuses.
It's so in-ter-est-ing that certain stories just keep getting served up, repeatedly, even if there's no authentic spontaneous public interest in them. Like this Woody Allen story, the Princess Markle situation, the Cuomo situation. You can probably think of others. There are ulterior motives in play other than getting clicks and deflecting the public from reality. The motives are obvious in Cuomo's case but not so much otherwise. Somebody really has a bee in their bonnet about Woody and I doubt it's because they are concerned about child abuse. I've doubted that there was child abuse for some time. He and his wife (former step daughter by adoption) have been solid as a rock for years. Mia Farrow, the scorned woman, has been incredibly obsessive about this for years, but that doesn't account for an HBO special. It's not like he's Harvey Weinstein and past his sell-by date; he's still making movies or would be if this scandal wasn't ongoing. It's just weird.