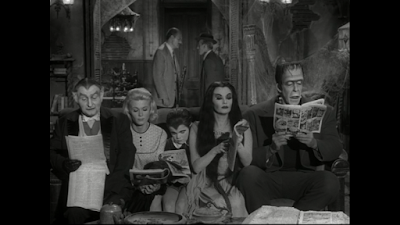 Everyone in my family loved to read. We didn't own a television in those days so we had to find our own amusements instead of sitting in front of the boob tube all the time. So we would read. Sometimes one of us would read to the family. Usually fiction but every once in a while we would enjoy some non-fiction like "Frankenstein"  or "Dracula." In fact Grandpa knew Count Dracula from the old days back in the Old Country. He said the Bela Lugosi version was the best. He really captured Vlad. He was a snot.

We really valued books and reading. So when some jerks in the John Birch Society decided to burn some books Grandpa and Uncle Herman went down to set them straight. Grandpa sliced a couple of them up by biting them. Some of them on the neck. Some of them on other parts. Uncle Herman lumbered around and scared the shit out of them. They stopped that book burning in it's tracks. Because that's how it started. First book burning. Then the next thing you know they start going after the Jews. We couldn't stand by when that went on. First they come for the Jews. The next thing you know they will come for the vampires.

When they came home we were all overjoyed. They were our heroes. Of course they didn't have anything to do. We didn't have the boob tube.

So I let Uncle Herman stare at my boobs.

Then he would lick and suck them.

I loved my Uncle Herman.