We Didn't Have Doctor Seuss Books

. . . "we" being my one-year-older brother and I. We grew up in the prime of their popularity, but we never owned or read one; so this latest book-banning nonsense doesn't hit me viscerally (at least, no more viscerally than any book-banning does). I've looked at a few since, and I can't say I'm impressed. Silliness is fine, but it's not enough, even for toddlers.

What we had was Uncle Wiggily: 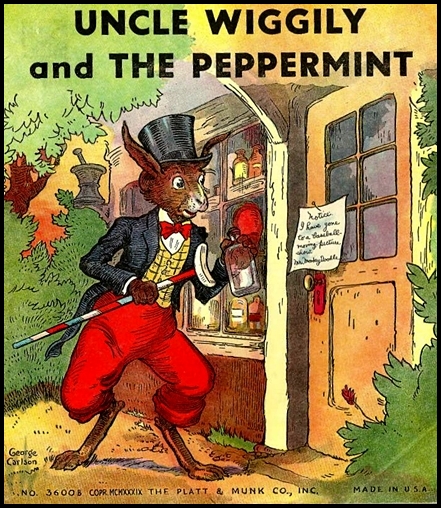 These stories were from an older generation --  Howard Garis started writing them for newspapers in 1910. Perhaps our parents remembered them fondly, bought them for our older sister, and then recycled them for us. And I bet they sometimes regretted it. Boy, did we love Uncle Wiggily. We demanded an Uncle Wiggily story be read to us every night. Every night. Again and again.

The part we liked most was the very end, which always took the form: "and next, if [something surreal and improbable] doesn't happen, I'll tell you the story of . . ." Here's a couple:

"So if the doorknob doesn't try to crawl through the keyhole to play bean bag with the rice pudding in the gas stove oven, I'll tell you next about Uncle Wiggily and the elephant."

"So if the pussy cat doesn't claw the tail off the letter Q and make it look like a big, round O, I'll tell you next about Uncle Wiggily and the little boy's skates."

By the way, that barber-pole-striped cane thing he's carrying is a "rheumatism crutch." I suppose that was a common and recognized thing back then, but you wouldn't know it from the internet -- every single DuckDuckGo hit for "rheumatism crutch" is a reference to Uncle Wiggily.
His rheumatism didn't keep him from shoveling snow 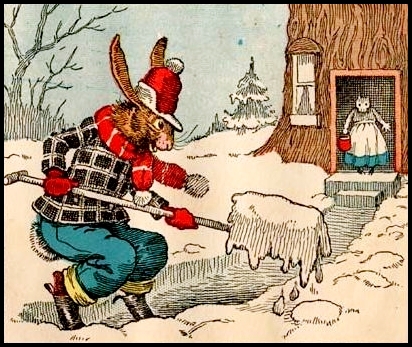 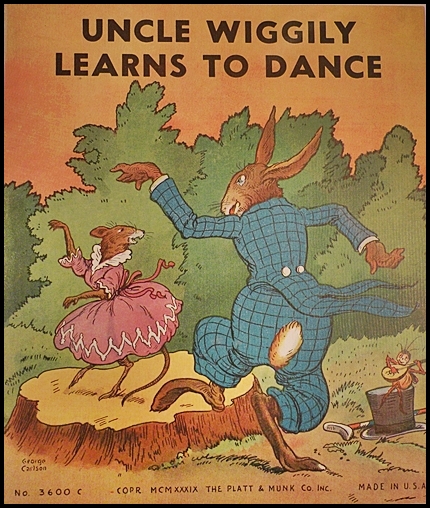 I'm not going to start buying up Uncle Wigglys at yard sales and hiding them under the floorboards. I can't remember anything even remotely offensive from the stories; though I guess if you tried hard enough, you could work up some outrage about the Skeezicks: 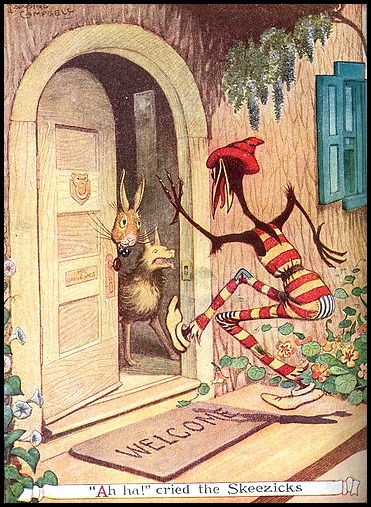 The Skeezicks is offensive to me - either he is a four legged crow or his wings have mutated into feet that require shoes - in either case, I am offended that the most intelligent of our avian friends is depicted so oddly.

I seem to remember playing an Uncle Wiggly game at a neighbor's house. We didn't have one, so all I can recall is the name of the game and that we played it. Beyond that - well, it's all lost in the mists of time...

I remember Wig and Seuss.

I guess I was born on a cusp.

I don't recall the Wiggily books. I probably had The Grinch and Green Eggs but the little kid books that I remember were the PD Eastman books (Go Dog Go, Snow, Are You My Mother?, Put Me In the Zoo) and also the Richard Scarry books.

Personally, I hate snow, but I still have that book from when my children were young. I took it to ASL class and signed it. It is good practice to use children's books when learning ASL.

If those books were still as popular as the Seuss books they'd be banned.
Snow=whiteness=bad
Go Dogs Go - the boy dog doesn't like the girl dog's hat (dogsplaining)
Are You My Mother? - "Mother" is transphobic heterodoxy - it takes a village
Put Me In The Zoo - false consciousness concealing exploitation of differently abled

Things are getting confusing around here. I honestly thought this was a Trooper York post and was impressed to the point of wondering if listening to those tales may have contributed to his love of story. Especially those with surreal, improbable and suggestive endings.

Somehow I know about Skeezicks. Though I don't recall being read Uncle Wiggily stories, it's possible they were read to my older brother and sister (born in 45) as she used to call me Skeezicks as an affectionate nickname--as in "Come on Skeezicks, let's do your hair" when she was tasked with taking care of me.

Winnie the Pooh and The Wizard of Oz and the Emerald City (creepy) are the two of the stories I remember my mom reading to me at bedtime, along with Blueberries for Sal. My dad would read me Mother West Wind stories on Sunday afternoon. As the story goes, his mom used to moral tales like that to him on Sunday afternoons, along with something from the Book of Martyrs!

Fun Post and picture. I used to read Seuss to the Msons, with The Lorax, The Sneeches, The Cat and the Hat, and the Grinch Who Stole Christmas as favorites with remembered lines.