The Summer of Boo Boo 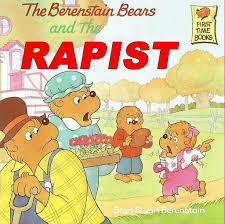 We were always wary of the campers in the summer time. I mean they were a bunch of weirdoes and all. Who comes to the woods to live in a tent when you can go to the beach and sip Mai Tais? Still and all there were repeat visitors who had to come to upstate New York to go camping because they were too poor to go to the Hamptons or the Jersey Shore. At least there weren't a lot of Jews because they were all in the Catskills with Mrs. Masiel.  Mostly there were Italians and Irish and a few Pollacks.

In particular there was this one Italian family that were very scary. The father was a craggy faced sour puss who liked to lecture everyone. The mother was half a retard because all she did was waltz around all over the place like she was an Australian or something.

The worst were the two sons. One was a real dummy who pretended he was Roger Grimsby or something since he was always trying to interview you. Maybe somebody should take him fishing and not bring him back.  It was the older one who was very creepy. He kept bothering sister bear. He would tell her how big his hands were and asked if she would date ten year olds.

Then he started touching her. On her bear skin so to speak. He was a creepy rapist

I always wondered what happened to him, I heard he went into politics.