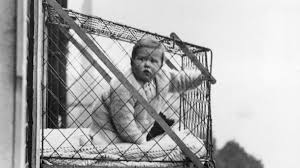 The communists in the press and in the Congress made a big deal about kids in cages down on the border during the Trump Administration. Of course it was the Obama administration that started that and the picture they kept using dated from the Magic Negro's years of abusing his office. Not that you would ever hear about it in the press.
Now that idiot Biden has ramped up illegal immigration to Mach seven. Every Tomas, Julio and Jose has poured over the border. Hundreds of unaccompanied minors have been brought in to be sex trafficked and abused. There are so many people that they can't even process them. They are not even giving them a court date. They are just releasing them and telling them to contact immigration to get their status straightened out. Yeah that's going to happen.
They refuse to let independent journalist into the concentration camps where they have all the illegals. They are not even letting in the trained lap dogs who will give them good press. That's because it is so bad that even they can't cover it up.
It is a scandal of biblical proportions. Nobody seems to care.
I say put them all in cages. Throw away the key. Just like they used to do in the old days. When real Americans ran things.
Otherwise we can just give up and officially declare America dead.
It's sick out there and getting sicker.
Posted by Trooper York at 12:52 AM

And people are noticing, I think. Sex trafficking is way up (not that it's a problem for the Demos) and Fake News isn't carrying a word of it.

What good news is this: the war for control of the Democrat party is getting nastier. Just like the French Revolution.

Has anyone ever compared the God Emperor of the Cherry Blossom Throne to Napoleon?

That situation is as bungled up as Michigan's and NY's Covid protocol, with a similar type of Whitlessness, Cupidity and Egotism involved that's aimed at making those in charge sound like they know what they're doing while real data and information is manipulated, withheld, or possibly not even being gathered.

What is making processing at the border so difficult?

These kinds of posts intrigue me and drive me nuts at the same time, as they highlight a real problem in need of a real solution, and then fall back into the nostalgia of good old days, when human evil, cupidity, witlessness, and egotism was just as present and virulent as it is today. Hence the "biblical proportions" parallel.

I don't know what the solution involves, but it starts by holding on to hope and the belief that chaos and rigidity are the two extremes that stand in the way of human growth and goodness.

Way back a lib of all people wanted illegals put on slow boats, unload them at Tierra Del Fuego and let them walk home. If things are so bad maybe we should bring our troops in from Korea, Japan, Berlin and every shithole in the Mideast and send them into GuadahonduraNicuragvador, to clean things up. even the Mexican President is blaming Biden for this crap.

That's because things were fine when we had a legal President. And, of course, Chlamydia is an even bigger fool