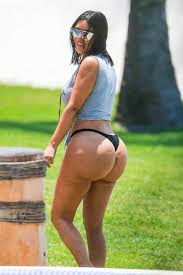 There used to be other posts. Plus, I would classify that one as porcine.

Sixty Grit said...There used to be other posts. Plus, I would classify that one as porcine.

Yeah, this is the only post that shows for me. You can't scroll down to prior posts. Please fix this ASAP. It's a blog killer.

The "Older Posts" butt-on will still allow you to see all the rest of them, but Trooper done messed up sumthin. De-mashify the toggle!

The proper word is steatopygia, with the accent on the pyg. Course this gal looks like she's hauling stereosteatopygias.

I don’t know what happened.

I thought it was only on my computer.

It is fine on the phone.

Inflated is the word. Those ain't real.

The proper word is steatopygia, with the accent on the pyg. Course this gal looks like she's hauling stereosteatopygias.

From the Greek, meaning meaty buttocks. The Romans had a contest in celebration of Venus Kallypygos (beautiful buttocks).

True steatopygia is African and usually a bit more misshapen.

They were average specimens of the steatopygous Abyssinian breed, broad-shouldered, thin-flanked, fine-limbed, and with haunches of a prodigious size

Then he married Liz.

I had a haunch you'd write that, Sixty.

I am cheeky that way.

On the other hand, Troop may have some latent misogyny rooted in his teen years when he was mercilessly rejected.

You can go to Lowes and buy a case of caulk and punch a hole in your bottom and pump your butt up that way. I buy the special Kardashian brand.

Starting with A in the word search for a fitting definition would have yielded Ass for the three-fold win.

Ass, in the animal category as a member of the equine family;
in the vulgar catagory as another word for buttocks or anus;
and as slang used to describe a foolish, stubborn or pompous person.

You can't wash that thing by yourself. I'd take it through the carwash. Still, even a high pressure nozzle can't possibly get in those deep areas.

Troop is just getting cattle-logical on us.

Troop is just getting cattle-logical on us.

I did notice the cover of yesterday's (4/16) NY Post had a similar-looking figure pictured with a few more sparkles to cover some of the expanse.

My first exposure to this sort of Wonderview-of-Outsized Women took place outside a bullfight arena in Madrid, Spain. While my mom was attempting to buy tickets for five Sol y Sombre seats to the afternoon bullfights from one seller, another tipped his hand with a wink to show me his special deck of well-thumbed playing cards. At least he didn't have more to offer under his coat! With the wink as the save, there was no harm done. While it's possible he was inviting me to enter into the series-ness of a critique, I doubt that was the goal. What lingers to this day is the awareness that it looked like he'd been playing with those cards for a long time!