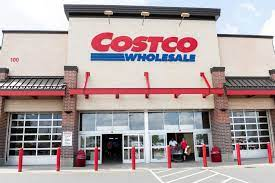 We rejoined Costco after not being members for about 18 years. We actually joined on a trip to Hawaii but never went when we got back to Brooklyn. I always hated Costco. I remember I used to take my mom there back in the day. She always bought a 12 pack of blueberry muffins. I mean who doesn't like a blueberry muffin. So we all eat one. That six left that nobody would eat. They would sit there until they got all moldy and shit. A waste of money.

You see Costco rips you off. They never sell one thing. Or if they do it is an off size. So you get two shampoo's or an extra large can of coffee. So it is hard to judge the difference with regular super market prices. You have to do a lot of calculating and you are tired and fed up so you just throw it in the cart. That's how you end up with $200 of paper cups and plates with some guacamole and some bananas.

Still and all we joined because we wanted to get some cheap glasses. I am always breaking mine and I can't pay full price all the time. So we wanted to get some cheap specs. The signed us up on-line. Only it turned out it was not really a sign up. We had to do paperwork and take a photo ID. Now I bitched and wailed and said it was racist and worse than Jim Crow but the angry black lady who signed us up didn't give a shit. We had to show proof identity and have to bring our Costco photo id to the store if we wanted to get in. They didn't even offer absentee shopping!

Naturally the cunt tries to up sell us to the premium status. Double the price but you get cash back.The wife ask if we should do it. I say definitely not as we will not be coming back that often to get any cash back. She then does the opposite. That's how we roll. She asks me my opinion. I give it. She does the opposite. Then later she tells me I was right and why didn't I tell her that in the first place. Which I did. It is our system. So we get the premium card and commence shopping.

I meander over to the meat section. They had some ok steaks that were within shouting distance of the supermarket. Then she starts questioning the butcher. Is any of this grass fed? No. Is any of it organic? Yes the seventeen dollar chop meat. Not the steaks. So she doesn't want any of it.

We look for gluten free shit and there is very little of it. None of our regular brands. Thus we ended up getting paper goods. Napkins. Plates. Solo cups. Big huge bundles of it that will last for months. The price per unit was slightly better than normal but not by much. Not worth driving so far out of our way and buying in bulk. I prefer to go more often and buying less until there is a sale.

We checked out the glasses and they seem ok but there was a long line. When we left and got in the car she was upset. She felt ripped off and we should have just got the cheapest membership since there wasn't much we would buy there. I didn't say I told you so. I just grunted and said lets go to Trader Joe's where we can get all of your favorites.

Thank God I kept her from getting blueberry muffins.

Back in the day when I was still shopping, before we moved out to the woods, I could barely navigate the Costco parking lot. And I'd end up feeling even more overwhelmed once I got inside.

From what I saw at the checkouts there was a fair amount of men who seemed interested in rounding up the goods, buying large and in bulk. Maybe it had to do with compensation for unfairness.

In addition to hauling the provender, SUV's are also useful for carting home the strays that have been searched for and found in antique and resale stores. Trucks do better with building supplies and mattresses.

We enjoyed a visit to The Arabia Steamboat Museum in Kansas City, MO when it first opened, amazed to see the amount and variety of stuff it was carrying westward. https://www.1856.com/

When the mighty Steamboat Arabia sank near Kansas City on September 5, 1856, she carried 200 tons of mystery cargo. Lost for 132 years, its recovery in 1988 was like finding the King Tut’s Tomb of the Missouri River. The discovery was truly a modern day treasure-hunting story at its best. The artifacts are preserved and displayed at the Arabia Steamboat Museum, located in the historic City Market. From clothing, fine china and carpentry tools to guns, dishes and children’s toys to the world’s oldest pickles—the collection captivates visitors of all ages

BTW, it was MrM who recently paused a moment too long and got caught one more time by the Direct TV salesmen at Sams, after 20+ years of shopping there and knowing better.

I buy only a few things at Costco: bulk TP and paper towels and large wedges of gouda cheese. The closest one is down in Middleton and I was just there last weekend. My brother wanted to go to a gun show there and I tagged along (and drove).We stayed over night and there was plenty of time to drive around town arguing about where places used to be.

I got in a shouting match w/ a Costco manager who was giving me the hard sell on the premium card. Then check out clerks started to upsell. I wrote NO! in permanent marker on both sides of my card. Ended that horseshit.

Year in and out TP is their #1 sale item. If you're disciplined, Costco is OK. My impulsive mom would have gone broke in a Costco.

chick, Near the Middleton Costco is a good Austrian bakery, Clausen's. It opened back in the 80's, maybe after you left?

I go to Costco for gasoline. Its twenty cents cheaper per gallon than other stations where I live. And you don't have to be a member.

If you're disciplined, Costco is OK. My impulsive mom would have gone broke in a Costco.

We go to BJ's. I do a couple of things like razor blades. The Blonde has a tendency to get a few things and then will go insane.

Proof of ID in every direction - except voting. Amazing, iniit.

Hey, April, good to see you back.

I was afraid to get gas.

That’s why I didn’t have the hot dog.

ndspinelli said...chick, Near the Middleton Costco is a good Austrian bakery, Clausen's. It opened back in the 80's, maybe after you left?

I remember Clausen's and the man Clausen. He was a regular at Capital Brewery. Although I left Middleton in 1984, I would come back regularly when my parents were alive.

Have you been to the Middleton Sport Bowl recently? Very cool place and good food. My brother and I and a friend spent 2 hours upstairs at the bar talking with the owner. We grew up a block away from there. The owner has worked there since 1972, so lots of stories.

Got a pair of glasses with progressive lenses once. Probably the worst lenses I've ever had. Could barely see. We are now devoted Warby Parker fans. Good prices, good fashion, and the lenses are great. The young helpers are also very patient with the older customers in our experience so it's not just for the young and hip. We do the in-store version.

We also buy fuel exclusively at Costco and rarely step inside the store. They are a Top Tier provider. I own two vehicles that require Premium and the 30 cents+ per gallon difference in price pays for the card quickly.

Chick, I was @ Middleton Sports Bowl in the early 90's. I was in an NBA Fantasy league and the draft was there. It was just a run o' the mill place then.

Regarding Star Prairie, I would like to meet our country boy friend.

ndspinelli said...Chick, I was @ Middleton Sports Bowl in the early 90's. I was in an NBA Fantasy league and the draft was there. It was just a run o' the mill place then.

It has changed radically. Growing up, I always wondered why it had that curved black roof that reminded me of the old Metrodome in MSP. Inside it was just flat ugly ceiling tile. The new owner took out the tile to reveal a curved and trussed roof structure. They built an addition over the old bar which has its own wet bar and can be rented out. TVs everywhere.

Costco was great when my stepkids were younger. They both ate like horses, especially my stepdaughter who played club soccer. Once they got out of the house we quit going except for gas and the car wash.

Our Costco is one of the closest to Sun City and all the retirees like to go there, hang out and scarf up the free samples. It's a real pain in the ass, but Costco won't build out in Sun City so we get the fun of watching an 89lb, 90 year old lady trying to hoist up a 95 pound jar of mayonnaise into her cart. Mrs. NorthOfTheOneOhOne said; "What the Hell is she doing? She's not going to live long enough to use all that!". My take was; "You know that's to replace the jar she bought last year, that when bad after she went back to Michigan for the summer.

And so it goes in the Copper State!

chick, I did several surveillances in the neighborhoods behind Middleton Sport Bowl. Not easy venues as people are neighborly and tend to notice strange vehicles. I would always need to use a van where I could be concealed.

Fun story, TY, well told. MrM and I know which muffins you're talking about and the way the last six mold. He couldn't stop laughing when I read it to him. It's you in vintage form. Truth with a twist.