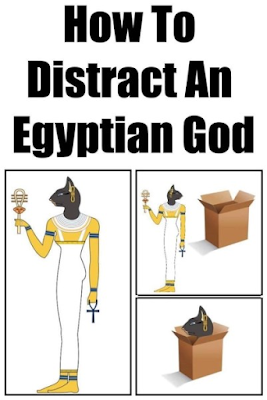 The closing of the comment box at Althouse happened within a week of Chip Ahoy’s last entry on his blog; and both events left me with a strong sense of sadness, ending, exodus and loss.

The online presence of a number of commenters whose stories and opinions I’d been reading for years (more than ten for some of them) was suddenly gone.  What followed was a lot of missing.  Missing that included recall of some of the familiar memes and themes presented in the past; along with some recognizable moments in the present that appeared to tie in to the known interests, issues and concerns others had expressed.  Among them, an Egyptian Cat, a Food Story (with pics) on Salt,  a Recall of Butter Moments, along with other Signs and Wonders.

From there, thoughts on Egypt and Leave-taking brought me back to the story of the Israelite’s Exodus, where they reached the desert part of their journey and started to remember with longing some of the good left behind, to include memories of the cucumbers, melons, leeks, onions and garlic they’d enjoyed while enslaved. This happened while they were experiencing the ongoing and everyday sameness of  daily provision received in the seemingly miraculous form of manna. The story, recorded in Numbers 11, is intriguing.  Even though Moses and Yahweh both start off on the same page,  Moses reaches the end of his rope first, and lets fly with the ancient  version of  “Just kill me now if this is how it’s going to go!”, while Yahweh responds to the grumbling, discouragement and lack of trust with “What? You think my arm is too short?” When all is said and done, a solution (albeit with consequences) involving a different kind of provision is found, and the journey continues on toward the Promise of Something More in the face of loss and change.

I experienced something similar this week after coming across the addition of an emailed comment on a recent Althouse post.  It was written by someone whose opinions I’d come to regard as thoughtful and thought-provoking over the years. And finding it brought back a sense of familiar connection; while also providing meat from the sky with the recommendation of a new book out, written by a 95 year old German theologian, entitled Resurrected to Eternity:  On Dying and Rising.

Fifteen years ago, following my younger brother’s death from blood clots and anaphylactic shock after taking a newly approved antibiotic (one later given three black box FDA warnings), I was left looking for a way to process that death and loss.  At that point, the religious teachings I’d received and held in the past left me with more questions than answers.  And that prompted me to set aside the boxed set of what I thought I knew and believed, and start looking for more.  I started by reading collected accounts of Near Death Experiences from a variety of people with different backgrounds and religious beliefs.  Then, with the impending death of my mom coming down the pike, I expanded that reading to books about death written by doctors, nurses and hospice workers, which meshed with some of the mysteries and oddities I encountered with her, including her conversations with deceased loved ones just prior to the start of morphine and her passing.

All of this to say, I ordered the book in the hope it might hold a helpful thought or two to consider, and possibly add to the collection of beliefs, experiences and hopes I now hold. If it doesn’t, I’ll set it out as meat for another to try by leaving it in the Little Library Box near the studio.

The expression on the face of the embalmed Egyptian cat below, who appears to be looking for the next box to jump into in the Great Beyond, portrays how I’ve often felt in my own search for more on that subject.

I know I carry on about the recent loss of my 21 year old cat but today one thing came to mind - this house is very quiet without him around. He was very vocal, always letting me know where he was and what he was doing. "Meow!" - I'm drinking water now! "Meow" - it's supper time Pappy! It's too darned quiet here now. That, and I keep reaching over to the chair he lived in for the last few years of his life and I want to pet him - nothing there but a blanket. Old habits die hard. I will adjust, I always do, but the period of adjustment to loss can be tough.

I'm leaving twitter at the end of this month. Their censorship is intolerable.

Sorry about your younger brother, MamaM.
I too have lost a brother.

I have a twitter account but I barely use it. They wanted me to verify who I am with a phone number - which means they know who I am. I think Twitter is linked with FBI and corrupt democrat party. What are we to do? fuck it. I say fuck it.

I'm leaving twitter at the end of this month.

May you have the courage and fortitude to do so, Lem! Before you pull the plug all the way (and go full F***-it!--Can of Cheese style!) I encourage you prepare yourself with some outside support and alterative places to experience the sense of connection (along with the dopamine hits!) that the clicks, zingers and quick responses on Twitter are capable of delivering.

Sadly enough social media is set up for that. https://www.theguardian.com/technology/2018/mar/04/has-dopamine-got-us-hooked-on-tech-facebook-apps-addiction.

And, in truth that may have been part of the "missing" I was experiencing, as something I'd counted on to experience a sense of connection was disrupted when the comments section at Althouse closed.

The other part of the "missing" mentioned in the post goes to the heart of what SixtyG shared. It's the absence of unique presence, the termination of meaningful connection, and the ending of predictable patterns of behavior and relationship, that comes with the grief of loss. Made real in a missing voice and empty chair. And the only way out is through.

Appreciating once again SixtyG, your enjoyment of kittehs, along with your ability to use story to enhance truth--another way of revealing the grain in the wood!

And Can of Cheese, thank you. I'm sorry for your loss too.

Is that King Tut's penis?

Lol! Something like that. Back to close but no cigar!