Why teachers are so overrated. 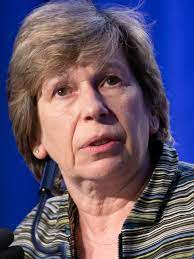 Do you know who RandiWeingarten is?  She is the leader of the American Federation of Teachers. She used to head the NYC teachers union. She has some interesting things to say about Jews. From the New York Post:

"Randi Weingarten leads the nation’s second-largest teachers union — which is alarming, since her recent remarks show her thinking on school reopenings to be confused, offensive and downright creepy.

In an interview with the Jewish Telegraphic Agency this month, the American Federation of Teachers boss repeated many of the debunked talking points that her organization has used to deprive kids of in-school learning for a year. Along the way, though, she also made what can — at best — be described as a bizarre comment about American Jews.

Asked about why some parents are “very skeptical of the power that they perceive teachers unions to have,” Weingarten, rather than addressing her answer to all parents (as the framing of the question had it), replied that she has a “very pointed response here for Jews making this argument.”

So what do you think about that? A leader of the Democratic party taking a shot at Jews. I guess it is no surprise. Cuomo declared war on the Hasid during the pandemic when they wanted to worship and marry and bury their dead in a way guarantied by the Constitution. The Squad who are the stars of the Democratic House are all bitter Anti-Semites. Most of the black leadership really really hate the Jews and love Reverend Louie.  So why would we be surprised when a major building block of their coalition goes after them.

Still the Jews vote overwhelmingly Democratic. I must admit am stumped.

They need to give everyone vouchers and close down the public schools. It is obvious that it is not important that every child get an education. They proved it during the pandemic. They let them stay home and many did not do their schoolwork. Others diligently studied and did just fine. Lets save a lot of money. Fire the teachers. Give out vouchers. Let parents set up small pods of five or ten kids Or let them go to private or religious schools. Let Rev Louie have his own schools. He can teach his students to hate the Jews. I just don't think the public schools should be doing that.

It's sick out there and getting sicker

Labels: End Public Education Now, It's sick out there and getting sicker., Teachers suck, Vouchers

States are now considering a type of universal voucher system. Parents get X amount of $$$$'s per year to spend on their child's education as they see fit. The teacher's union is not only hated by conservatives, it is also hated by moderates, suburban dems, and really hated by blacks. That was before this pandemic gravy train. These bastards have overplayed their hand and there will be blood. It's a good time to start a private school.

They played a video before the Twins opener. The video thanked teachers..not healthcare, grocery/liquor store clerks, truck drivers. etc. There were boos. Not resounding boos but they were heard pretty well because of the paucity of applause. The teacher's union got to the Twins and they were happy to oblige. I may boycott going to games this year. That's a big deal for me. Most people can boycott w/o much effort. I LOVE baseball. And here's the thing, there are SJW's particularly in basketball, less in football, but few in baseball. The ones who are normal are afraid to speak. We need a coming out day, when all the normal people take to Twitter, or wherever, and speak freely. Not angrily..just freely. We have the overwhelming numbers. We are Tricky's "silent majority."

nd, that's the only fair solution. Otherwise you're just handing your kids over to a bunch of malevolent self-serving idiots.

You will get more flack for mentioning she's a Jew than she will for anything she says.
She is a Marxist who yaps about the ownership class yet makes a half a million a year.
She is self described as deeply religious yet is married to a woman rabbi.
She is a plagiarist.

The gushing over the "first responders" has been insulting from the beginning. Have you seen a weepy sad piano ad thanking the people who got run out of their own businesses for their sacrifice? No, you have not. How about for people who just kept showing up for work and kept the business going? Nope! Their jobs aren't sufficiently "essential" to the narrative of hysteria and panic and dependence so their sacrifice is not recognized. And it doesn't need to be except that other people are valorized for doing the same thing, and less. A similar thing happened after 9/11, which is not in any way to diminish the sacrifice of the people who actually did run into the buildings but the halo effect extended way too far, from the actual heros to people who happened to be in the same type of work thousands of miles away. Also, there are a lot of government workers who I'm sure think of themselves as essential (I'm looking at you, court clerks) who are not showing up for work at all.

Never forget the words of the founder of the AFT, Albert Shanker.

PS Teaching is a calling much like medicine and the law used to be.

If you're in it to make money, you don't b elong.