"Editor's note: This story has been updated throughout."


The normally ceremonial last day of the legislative session briefly descended into chaos on Monday, as proceedings in the House were disrupted by large protests and at least one Republican lawmaker called immigration authorities on the protesters.

State Rep. Matt Rinaldi, R-Irving, said he called U.S Immigration and Customs Enforcement while hundreds of people dressed in red T-shirts unfurled banners and chanted in opposition to the state’s new sanctuary cities law. His action enraged Hispanic legislators nearby, leading to a tussle in which each side accused the other of threats and violence.

In a statement, Rinaldi said state Rep. Poncho Nevárez, D-Eagle Pass, "threatened my life on the House floor," and that Rinaldi is currently under the protection of the Department of Public Safety as a result.

“I was pushed, jostled and someone threatened to kill me,” Rinaldi said. “It was basically just bullying.” 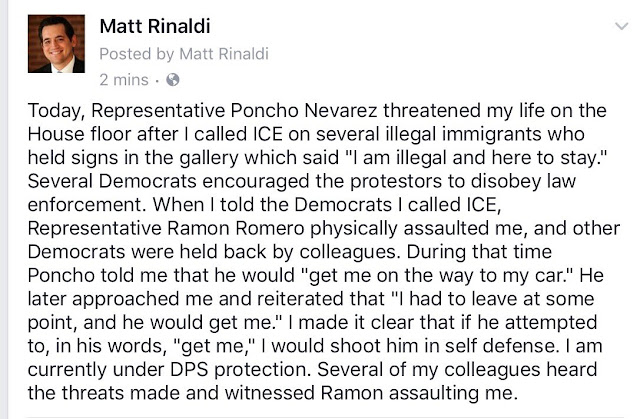 Nevárez said in an interview with the Tribune that he put his hands on Rinaldi and told him to take his argument outside the House chamber. "But was I going to shoot the guy? No," he said.

After the incident, Nevárez tweeted in response to Rinaldi's claims: "He's a liar and hateful man. Got no use for him. God bless him."

DPS was not available to comment Monday because of the Memorial Day holiday.

Hispanic Democratic lawmakers involved in the altercation said it wasn’t physical but indicated that Rinaldi got into people’s faces and cursed repeatedly. Video shot from the House floor shows both Republicans and Democrats pushing each other.

“He came up to us and said, ‘I’m glad I just called ICE to have all these people deported,'” said state Rep. César Blanco, D-El Paso, whose account was echoed by state Reps. Armando Walle, D-Houston, and Ramon Romero, D-Fort Worth.

Democrats are corrupt. All of them.

No, this goes beyond corruption to anti-America traitorism. Islamo-Mexicrats simply do not care about American sovereignty much less American borders. Texas has become a canary in the coal mine in terms of seeing leftists flood into the state and try to fundamentally change it from withing. That's what you are seeing right now.

This all started when we started laughing at Jose Jimenez.

PS If you know your history, this is all very Sumner-Brooks.

A person who walks with a cane is unsteady on his feet. Agree?

You need a good solid stance and some proper leg movement to beat someone senseless with a cane. Agree?

So the beaten guy cannot be all that physically mobile can he? Or else he would move out of striking distance and use superior mobility to move in and overtake the attacker and grab the cane and counter attack.

The first strike must be a serious blow.

Right across the head. Full force. And that takes a solid stance.

Yet it did work. The crippled guy did beat a non-cane person.

It's what makes the story so odd.

See, I'm putting myself in the place of the attacker, using canes myself, and it doesn't work with sureness.

So I avoid clubbing people over the head with them. For that reason.