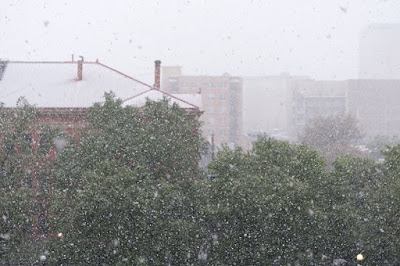 Did I just now say garden? The title should be "snow." Travel warnings on t.v. These poor plants replaced the ones that were frozen then these were beat up badly by hail and chilled from that too. And now this snow storm. Good thing I didn't get around to replacing these yet.

I was hoping they would live.

There are still two more online orders coming in a few days. I derided them for being so late. Shows what I know. 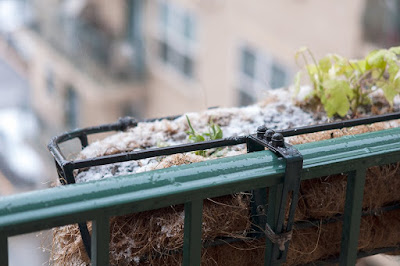 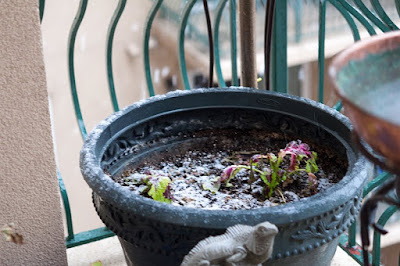 Meanwhile a tray of seedlings has begun germinating. Morning glories, Hatch chiles, and tomato seeds were all planted at the same time. The little green heads of morning glories popped up. Had I kept the tray indoors they'd all be germinating by now. But they were outdoors and needed more and steady warmth than they received out there. I gambled poorly. The pots are loaded with bulbs waiting for it to be sufficiently warm.
Posted by Chip Ahoy at 1:47 PM

My thoughts on today's weather condensed into 2 seconds.

I saw the national weather and snow in Denver, thought of Chip and Rene.

I spent 500 bucks trimming the ornamental pears over the winter. Why did I bother?
All that's left are trunks.

Here's a lovely webcam image of the flatirons.

It is 95 here today. Stifling. I was sweating my ass off after my walk to the office this morning.. The walk home will be slow and underneath trees.

Rene, I drove through your beautiful state the first week of May. I stopped in Glenwood Springs for a dip, it was 60's. Drove to Breckenridge for the night. As I walked to dinner @ 6p it was snowing/sleeting. Wild, wacky, I tell ya'! It was mid 80's a couple days ago in Twin Cities, going down to 30's today.

Titus, I saw Boston is breaking a record high for today. Thankfully my sister is done w/ menopause. She lives on the Cape but drives to Boston several days a week for work.

ND - Colorado is beautiful, at times ugly, and very cruel.
Glad you were able to take a dip in the hot springs. I love Glenwood Springs. Did you try the new place? Make sure to go the Slope and Hatch for lunch if you return. Best tacos and hotdogs!

Rene, Thanks for the food tip. I always try to stop in Glenwood and will try Slope and Hatch next time. I don't know what you mean by "the new place." When I go to the Springs, there are usually a busload or 2 of Eastern Europeans, but this time is was Chinamen.

There is a new hot-springs park. Iron Mountain. I have not been there.

The big pool famous old hotsprings pool is the standard. Used to go there after 10PM for the discount. Soak until asleep. Only problem is waking up and leaving.

Rene, Thanks for the info. Between the altitude and hot water I learned you have to drink a lotta water if you're going to hang in that big pool. I lust love that place. There's a lotta construction in town right now.

I heard they are changing and improving the highway on and off ramps. A total re-vamp.

The only negative about Glenwood is that a highway runs thru it.
I laugh at myself many years ago I was trying to get into town and I ended up back on I-70, turned around, back up towards glenwood canyon. I had to drive all the way into the canyon to find an exit where I could turn around. It was a beautiful detour.
Lots of exits in the canyon where you cannot turn around.

I have been to Glenwood Springs twice on weekend mini vacations by traveling via train from Union Station in downtown Denver. The last trip return leg was a bit of a nightmare as severe weather at other locations caused a severe delay in the train departure leading to finally getting back to Union Station after 3 AM. Probably partially my fault as I wanted to experience the hot springs when there was snow around. The steam in the cold air led to low visibility so I doubt I will try another snowy hot springs trip anytime soon. Despite that, I still love vacation train travel as I basically hang around the observation cars to watch the scenery and can easily get up and walk around. If time is not a factor, it is a relaxing way to travel.

It was a bit of a hassle driving around this heavy wet snow today with the damaged windshield from last week's hailstorm. I finally get it replaced next week as I had to get the insurance inspector to look at the car and then schedule the replacement. There is a huge backlog on inspections and repairs due to the scale of the hailstorm. Surprisedly my car was not totaled as I just made it under the max percent damage vs value rating.

Was this storm a complete surprise? I recall freaky weird weather in Colorado 30 years ago.

Colorado, Good comment. I like train travel as well, but Amtrak sucks. Regarding the insurance claim, insurance companies hate hail storms. People think tornadoes and hurricanes as insurance nightmares but hail can be worse. I worked for those Godless bastards for decades.

Make sure to go the Slope and Hatch for lunch if you return.

Does Slope and Hatch serve Chinese? Nick seems to think they do.

Chick, not a surprise. It can snow right through June.

The weather can kill you, on both ends of the thermometer.

The weather morons got this storm right. Bastards.

ColoradoJim-
The train from Union Station to Glenwood is on my to-do list. A couple I know did it a few summers ago, and loved it. Amtrak warns you upfront to assume delays as they are common. It's a six hour journey, one-way, if everything goes smoothly.
The couple took the journey from Denver and they were delayed on the departure. They shrugged it off and wandered around Denver while they waited for the train to arrive. (not so bad) Being delayed ON the train would suck.

Here's a little blurb about the long-weekend getaway. She mentions Slope and Hatch, where they serve jackalope and wild prairie dog.