Charlie Martin: Should We Trust the Trump/Russia Coverage?

Via Instapundit:  The kerfuffle about what Trump said to the Russians continues. As I wrote today, I'm suspicious about the story. But for purposes of argument, let's assume the story is true: Trump did, through bragging on our really, really great intelligence, not only tell the Russians about why we believe laptop bombs are a threat, but disclosed enough that it would be possible for the Russians to infer sources and methods from it.

Now, as I seem to keep needing to remind people, I'm not a Trump fan: his perpetual self-promotion annoys me, his habit of shifting positions in moments unsettles me, his skeevy business practices in the past make it hard for me to respect him, and his apparent willingness to say anything to get a deal done makes it hard for me to trust him.

And yet, well, here is my immediate reaction on Twitter to the anonymous sourcing: 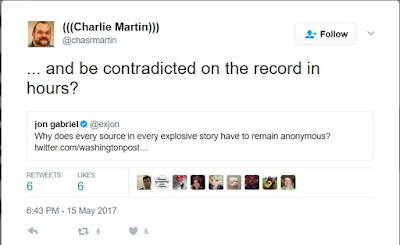 That was (I believe) before H.R. McMaster denied it, and certainly before I'd heard McMaster had denied it. It was a cynical prediction that turned out to be true.

So why is it that I, suspicious of Trump and merely glad that Hillary Clinton didn't win, react immediately to this story by suspecting it was untrue?

Simply enough, because however suspicious of Trump I might be, I've gotten to be even more suspicious of anonymously-sourced stories about Trump from the Washington Post, the New York Times, and frankly, from all of the legacy media.

Why? Because they've proven to be untrustworthy. Becket Adams at Washington Examiner started a comprehensive list in February, promising to keep updating the list -- after February 18 he stopped and I don't blame him. He probably threw up his hands in disgust. Mollie Hemingway at The Federalist has her own list (and some useful hints about any WaPo Trump story).

Circa, a new website I heartily recommend, ran a story on May 12 documenting stories (I started to say "all the stories" but actually I wouldn't want to bet on that) of all the things the legacy media has reported about Trump that were wrong.

We should trust the media as far as we trust Rodham. Unfortunately, a significant number of them want her to return to power.

Call it "The Rodham Restoration."

In answer to Charlie's question: Hell No.

I'm having trouble logging on from my computer. But I'll keep trying.

If it's in the WaPo, prolly not.

Trump needs to go after Bezos. So far Trump has been a paper tiger. Amazon just entered the pharmacy biz. CVS stock dropped. Amazon is evil. They treat their employees like shit. Trump is understandably overwhelmed w/ this blitzkrieg from the MSM but he better go on the offensive FAST!

The only thing CVS got going for them is the pharmacy. It's a ghost town when I walk in, the so called dollar store chains however.

Going after Bezos is punching down. It's also unnecessary.

Bezos is doing a dandy job of making a fool of himself.

Just look at you!

At this point we watch only to mock. I watched for five seconds and moved on from disgust. Right off. First thing. They met me when I woke up. I cannot be the only one reacting this way. They're not trusted any further than you can throw a sack full of hammers. On anything..

LOL "Punching down" shows abject ignorance of the Amazon/Bezos empire. Not surprising, however.

Lem, CVS made a smart move taking over all the Target pharmacies. And, their Minute Clinics are always busy w/ young people. RX's are where they make the $'s.

I have a hypothesis about Bezos and the Post. I have no evidence to back it up and offer it only for purposes of the reasonable, well-informed discussion we always get here at Lem's.

Bezos bought the financially failing Post from the Graham family in 2013. The Graham family, liberal, self-righteous shitweasels that they were, had a day to day hand in the operation of the paper and managed it with a sense of responsibility and history. They were no strangers to manipulation of the news for the advancement of the liberal agenda...but they had limits. The perceived "integrity" of the operation mattered to them personally, professionally and financially.

Bezos is a busy man and has little if any input into the day-to-day operation of the paper. By taking the Grahams out of the equation and not putting himself in their place he has allowed the working journalists at the Post to assume total control of the paper's output.

These people, for the most part, have no limits. Thus, Bezos' failing is one of omission rather than one of commission. That's not to say that he is blameless or that he is not in agreement with the journalists worldview, but rather that in removing the modest limits the Grahams put on the news reporting and editorial content of the Post he has allowed the inmates to take over the asylum.

I could be wrong.

Rabel, You could be right. But Bezos is an infamous control freak. I know people who worked and still work for Amazon. They control and do surveillance of all operations. So, I would lean toward a hybrid. He keeps his finger in the mix @ WaPo, and as long as they are attacking Trump, he leaves them alone. Here's the reason I'm perplexed @ Trump not attacking Bezos where it hurts, antitrust. WaPo would be limited in how they can report on a direct battle between Trump and Bezos. Well...that might be naive, they SHOULD be limited on how they report. And, the NYT would take some pleasure in seeing Bezos and WaPo being attacked.

Bezos LOVES his space project out in the desert of West Texas. I've spoken w/ locals in Van Horn, TX., having stayed there several times on my travels to and from San Diego. The locals, many Mexicans, say it is very secretive and strange.

"He keeps his finger in the mix @ WaPo, and as long as they are attacking Trump, he leaves them alone.'

That's what I don't know. How involved is he?

It's easy and a little lazy to pick out one offender, label him or her as the Devil and than blame him or her for all of a particular group's sins.

The problem with this is that it tends to let the lesser demons off the hook.

I know the scope of Amazon, but we're talking newspaper here, not Internet merchandising. Trump probably thinks Amazon is a great example of entrepreneurship and innovation.

Somebody lets his personal animus color his judgment.

Leftists, the DNC, and their directors, the MSM believe that if they pile on enough shit onto trump to swamp out any iota of success or light that he may generate, that they can stop him in his tracks from a legislative point of view and get him on some process bullshit or get him to resign. This is what they are trying to do. All the calls now for impeachment or a special prosecutor are all a part of that light killing.

What this really shows, is that democrats have nothing in their arsenal. This is it. They haven't promoted any legislation, only obstruction, and lies. They haven't shown any interest in leadership, simply to obfuscate and promote their unified agenda of anti-American policies rooted in politically correct pablum given to them by the MSM and their cadre of loosely organized special interest protected class groups. That's it. In short, the democrats are nothing more than political Lilliputians and Trump is Gulliver, hoping they can catch him asleep so they can tie him down.

So far, he's proven them wrong again and again and this latest Comey memo is a bag of horseshit that will be disproven as well. Republicans are their own worst enemy. They willingly lay down the trip wire in front of themselves to show everyone how they can trip over it. Fucking idiots.

@edutcher: Bezos had years and years of free tax subsidies to establish his business. This is often forgotten. I'm not arguing for more taxes, just fairness. What Bezos needs is more competition.

@Rabel: Whh would you begin to think that Bezos is not responsible for what his press prints? When has not been true, historically?

Uhh, I hate writing on iPhone.

This is starting to resemble the Valerie Plame democrat-MSM riots. What exactly is super secret rocket formula in telling the Russians that ISIS may be planning on laptop bombs?
What's so horrifying of suspecting the intel came from Israel? The Isaelis had also passed information to the Russians much to the US governments annoyance. The Russians had also passed us information. The Russians warned us about the Tsarnaev brothers. The FBI, Comey again , chose to ignore them. He should have been fired for that. Hell, he should have been fired for prosecuting Martha Stewart.

If only he'd just outed the CIA's Afghanistan station chief. Then all would be well!

Wow, for such a brainy guy (to hear him tell it) how come Charlie didn't see through the "legacy media" (his term) as untrustworthy for the past quarter of a century? It's actually the past half century, including Uncle Walter.

The newspaper scoffed at by a person here BROUGHT DOWN NIXON. So, there's that!

I analyze people for a living. I understand why people act as they do in the vast majority of cases. However, interviewing people who were patently wrong or lying, and having it be OBVIOUS, but they continue to dig in their heels, is befuddling to me. I find that ilk worthless, and hurtful to those around them.

Didn't Trump at one point say Amazon was a monopoly which needed breaking up, or words to that effect? That would give Bezos a heck of an incentive to tell his underlings at the Post to git 'im!

ricpic, Yes Trump said that. Bezos bought the Washington Post to have a hammer to go after anyone who tried to break up his monopoly. Bezos bought WaPo in 2013. He knew his lapdog Obama would be leaving soon and he would need a weapon to go after any politician who dared try and break up Amazon.

Ampersand, people have really short memories. Also, the grown (/giggles) millennials of today were young during the Valerie Plame non-scandal. They also most likely had zero clue about Martha Stuart. How does this all correlate? Well, Martha Stuart got pinched on a process crime. It was a he said/she said case, but the prosecution said she lied to investigators. Also, during Valerie Plame, Armitage was the leaker and confessed to be so, but he never got busted. Scooter Libby got busted because he lied or so we are told, to investigators on something tangentially related, a process crime.

This is all gearing up to look like the same thing. Democrats calling for a special prosecutor, so that prosecutor won't find anything, but pinch people on process. A misspoken statement here, an ommission there, something and then they can pounce and scream, "SEE!!! SEE!!! TRUMP IS GUILTY!!!"

Charlie Martin is not a smart man.

"@Rabel: Whh would you begin to think that Bezos is not responsible for what his press prints?"

I don't think that and didn't say that I did.

@edutcher: Bezos had years and years of free tax subsidies to establish his business. This is often forgotten. I'm not arguing for more taxes, just fairness. What Bezos needs is more competition.

No problem with that, but, if you object to Bezos' paper's false reportage, going after his business looks petty.

No problem with that, but, if you object to Bezos' paper's false reportage, going after his business looks petty.

Truth is, I don't like either. His protected monopoly and his newspaper.