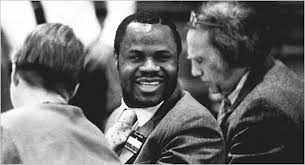 I have no idea who that is, but that picture reminds me of a joke my brother told me:

What do you say to a black guy in a suit?

Will the defendant please rise.

Is that William Kunstler on the right?

Yup, that's him. Wow, what a blast from the past.