Truth, Justice and the BLM way! 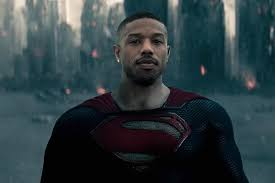 So did you hear about the latest great idea from Hollywood? They have hired famed anti white writer and Nutty Professor hero Ta-Nehisi Coates to write a Superman movie where Superman will be black. That's right. A profoundly racist anti-white ideologue will be giving us his take on the Man of Steel.

A report from one of my favorite websites "Bounding into Comics" gives us the skinny.  It seems they want to make Superman black and star the guy from "Creed" as the Man of Steel. Coates is coming off his destruction of the Captain America comic book and is ready to destroy another franchise.

We can look forward to the Man of Steel protecting criminals and attacking the police. Maybe they can just change his nickname to the "Man of Steal" and show him using his super speed to loot the CVS during a BLM protest in Metropolis. Or he can use his heat vision to melt the statues of George Washington and Thomas Jefferson because they were slave owners. The possibilities are endless.

One thing is for sure they are forgoing the giant Chinese market because they never watch movies starring black people. In fact that is probably the only way this dreck doesn't get made. Hollywood will choose sucking the Chinese dicks instead of kowtowing to BLM.

Isn't Coates of many colors one of those "We wuz kangs" guys? Flyin' around in they fline machines an' sheit? He sure seems normal. At which Ivy does he "teach"?

That's his stock in trade.

Coates learned to hate whites from his Black Panther daddy. Interesting that he now wants to indoctrinate kids into doing the same. Will that circle be unbroken? I think not. There's too much money in it.

I wish they'd bring back Shaft--that at least spawned some good music.

They are leaving a lot of money on the table is they have a Black Superman.

The Chinese never go to black movies. Hollywood is almost totally dependent on Chinese money these days. Not only for production but for box office. The big superhero movies are the ones that translate overseas. That's why studios like Disney suck up to the Chinks.

If they make this movie I predict it will be one of the biggest failures in Hollywood History. Right up there with Heaven's Gate or Cleopatra.

They'll get the US school system united contracts making it mandatory viewing much like Spielberg did for his Lincoln revision-- my kids were forced to watch it at Oceanside HS. That alone should be enough graft to recoup some of the squander.

I mean, when you can force people to watch something and get paid, how is that different than a Chinese audience?

I wonder if this guy is pompous enough to insist his last name be pronounced in three syllables like coitus?

I mean there's a big undeclared war against "racism"going on out there. Hollywood played their part well during the Big One.

Off topic but doesn't Hunter Biden have both Chinese and Hollywood connections? I'm surprised that Hunter Biden isn't the butt of more jokes. It's bad enough that he gets off on his crimes -- but to be ignored by the comics? -- that's a head scratcher.