Whatever do you mean Miss Moneypenny 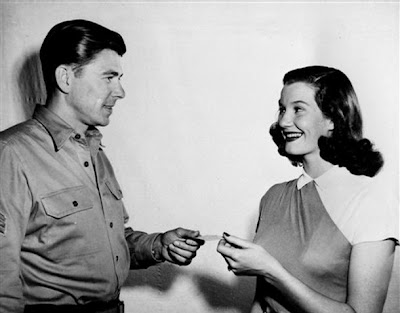 "I see this photo on your desk Moneypenny. You were quite the little minx in your youth weren't you?"
"Oh I had my fun Commander Bond. I worked at the Army Department during the war."
"Who is the young man, you're boyfriend?"
"Oh no just a young man that I gave a VD card to as he was cleared of all disease. I hear he later went into politics. I bet he wouldn't want this photo to get out."
"I would think not. What a terrible disease. Thank God I have never had the misfortune."
"Well it isn't all bad. It made you think. In fact this young man said it was very important in his political philosophy. In fact it gave rise to one his main planks in his political platform."
"Really what was that?"
"Why the Trickle down effect....for obvious reasons."
"Quite."
Posted by Trooper York at 7:00 PM

Unlike one of his coworkers at his old job, he was more interested in politics than who the new girl was. Of course, neither got to first base with the girl who always worked with them.

Fun fact: Producer Frank McCarthy (Patton) was reservist when WWII started and ended up working for George Marshall. When the commission of Reagan floated across his desk, he gave Reagan a call to congratulate him. On hearing of it, Marshall was so incensed at the seeming impropriety, he ordered no more commissions for Hollywood stars.

PS Former President Donald Trump denied losing his failed reelection campaign during a series of interviews Wednesday, his first since mobs of people upset over his defeat stormed the U.S. Capitol last month.