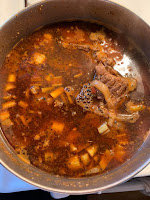 Yesterday I made Ropa Vieja which is one of my favorite Cuban dishes. The wife went out to Hobby Lobby with her girlfriend so I could spend some quality time with my stove. You see Ropa Vieja is basically a Cuban Pot Roast and takes about five hours to make. So I was able to put it on the stove to stew while I wrote in the next room.
Here are the basic ingredients:
20 cloves of garlic
3   large sweet onions
1   bag baby carrots
5   stalks of celery
5   pounds of chuck steak
1   jar of Spanish olives with pimentos
1   jar of roasted red pepper
1   jar of tomato sauce
2   cartons of chicken stock
Salt
Pepper
Cumin
Chile flakes
Cayenne pepper
Rosemary
Thyme
Other herbs in those gay Simon and Garfunkel songs
Oregano for the guineas

First you mince the garlic in your food chopper in put it in sizzling Olive Oil you put in the bottom of the Stew Pot. (By the way Popeye thought Olive had a sizzling bottom...it was flat but she was into butt stuff so she was popular around the seaport).

Fry up the garlic and then add the thinly sliced onions and fry until translucent. Sort of like Johnny Winters dick which you can ask Stevie Nicks about but more about that latter.

Then you put the meat in and fry it on both sides until it gets brownish. Not Yaphet Kotto brown...more a Harry Belafonte tone. like this: 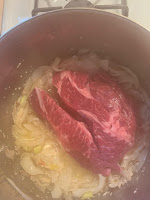 Yeah I know it is not brown yet but just give it a few minutes. Take your time. Like a brother on his way to work. Or Joe Biden going to a press conference.

Once it is browned put in the chicken stock, tomato sauce and enough water to fill up the stew pot. Add the carrots and the celery that youse have cut up like little u's.  Add in all the spices. I usually use a teaspoon of each except for the oregano which I put in a shitpot full. Turn it up to bring it to a boil and then turn it down and let it simmer. For four hours.

In the fifth hour add the olives that you have cut in half. Add the red roasted peppers.

Stew another half hour.

Take out the meat and put it in a bowl. Break it apart with a fork. It should open up like Lindsey Lohan legs on a Friday night. Pour in some of the sauce and make sure you get the goodies. The olives. Peppers. Carrots. Celery. Serve over rice.

Serves six people or Trooper and his wife if he is hungry.

I made it last night and everyone cleared their plate. Twice. It was great.

Not just any old robe but Fidel's bathrobe.

I would make this. Might add a little heat to it.