Life from the porch 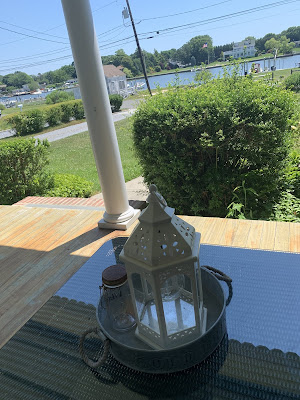 The thing about Long Island is you have to be near the water. It’s what makes it worth living there. I mean I every place has something. Wisconsin has cheese. Minnesota has looting. Carolina has a live and let live attitude about sex with your first cousin. Florida has….well… Florida man. Long Island has the water.

People from the city make the trek to the giant state park Jones Beach that was built by Robert Moses. There are other great beaches like Long Beach, East Atlantic beach, the Rockaways and Lido Beach. It is the beaches out at the Hamptons that are really special. 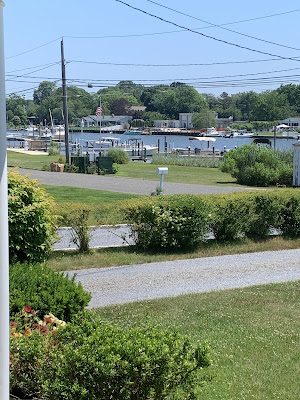 Our friends house is in the Moriches which is Hamptons adjacent. The house is on an inlet with a dock where they keep their boat. The bought it three years ago for around 700 and refurbished it. She is an interior decorator and the place is a showplace. I am a big clumsy oaf so I have to mince around carefully so I don’t break anything. Now they sold it for 1.2 so they can go on to the next one. But right now it is set up perfectly.

We extended our stay a couple of days since this is the last of Sheila. The wife went antiquing with her friend and I am drinking coffee on the porch and relaxing.

It don’t get much better than that.

My now late, now ex-, F-i-L used to haul us over to Jones Beach many years ago. It is a great beach, a great park, and we had some good times over there. You can walk a long way on that beach, but it is important to turn around before you get to Fire Island.

I've only been to Aqueduct, Belmont, Shea, and the airports on Long Island. Obviously the Long Island I know is blue collar. Our buddy is in the patrician end.

I once dated a woman from Freeport, LI. Her dad helped engineer the Twin Towers. Her accent was to die for. She used to imitate a girlfriend saying when they'd go to beach in their bikinis their bodies would get "daw-kuh and daw-kuh." This made for awesome tan lines.

As long as you don't back in.

Pretty spot. I've never been to New York - except a short stay in Rochester for my nephews graduation.
You're a big clumsy Oaf? no way!

Nothing to do with anything else, but guess who's doing comments?

Ed, do you mean the curated ones?