I went out Tuesday to get the leaf pictures I promised Sixty Grit. Right in the middle of the street was what I'm pretty sure was a baby blue jay, flopping around and squawking. I couldn't tell whether he had an injured leg or wing, or just couldn't fly yet. I picked him up and put him in the undergrowth below one of our trees. 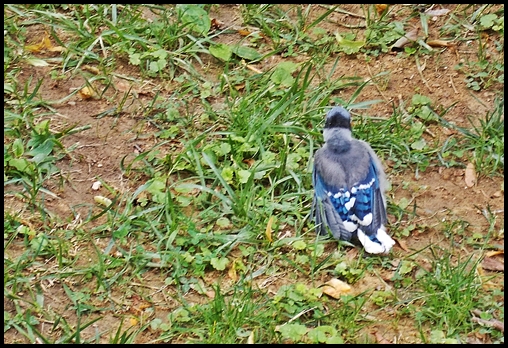 When I turned around I saw that he had a sibling who had been sitting on a recycling bin and watching us the whole time. This one could fly, though reluctantly and clumsily. He was still there when I came back from my walk in the little park. 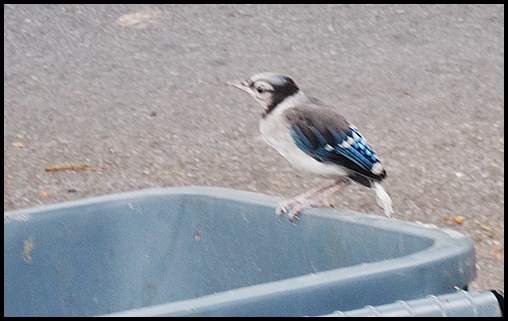 I went out later to check up, and found one perched on a low branch of that same tree. 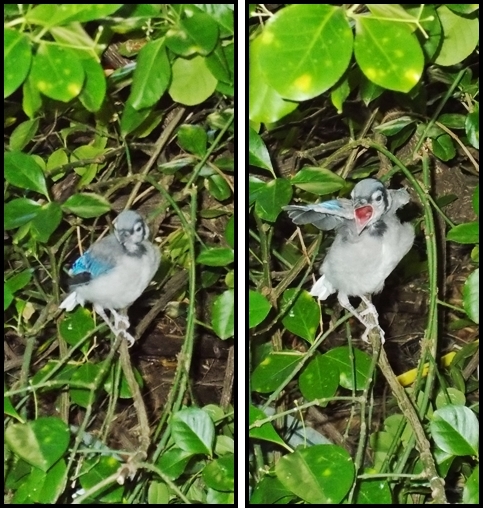 I hope it was the one I found in the street, as that might mean both of them are OK. I wonder why the parents weren't around; I should have been getting divebombed, or at least screamed at. Maybe they figured it was time the little nuisances got a job and a place to live, and kicked them out.

Oh yeah, almost forgot: here's some leaves from the trees I've been assuming are beeches. (In fact, I wouldn't know a beech tree from a beach umbrella.) 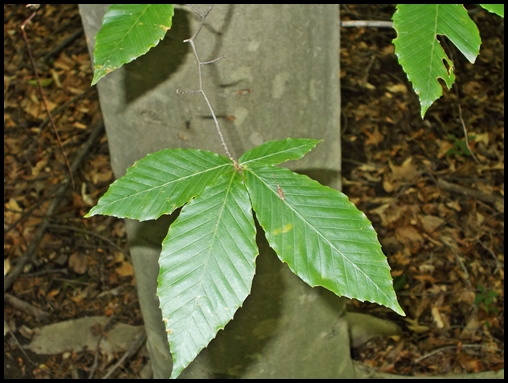 Sure looks like Fagus grandifolia leaves, so my speculation that the trees might have been hop hornbeam are off base. Yer out! Hit the showers. Well, okay...

Just-fledged jays ... cute. 'Rents are probably nearby, just busy collecting grub(s). My experience is that if they're out of the road and out of reach of housecats, they'll work it out.

Good job with the jays. I had a bird fly into the closed window of my house which knocked him out. Looking at his limp body in the grass I didn't know what to do. There was another bird looking just like him in a tree screeching at us. Eventually the little guy came to so I went inside and watched until his wings started working and he took off. The next day two birds looking just like them circled me and made a little noise then took off. I wanted to think they were thanking me but they could just as easily have remembered me as a horrible monster.

Raucous! And great mimics -- they make a very credible hawk cry in our neighborhood to scare other birds off the feeders.

Also, good job helping our avian friends in their time of need.

Update: this morning (Wednesday) I saw one of the little ones on the ground below the tree, and an adult jay hopping around in the branches above. Good.

I wonder how the babies can fly at all -- they've got hardly any tail.

We were lucky enough one time to get a large flock passing through. The lawn was a writhing and loud mass of blue for a little bit...and then they were gone. They are very smart birds - members of the coRvid family along with crows and ravens who can make and use tools.