If you can call that a summit. They returned a little bit early. Went like this:

Maybe I made up that whole last part. Could you tell?

First, Trump held a bilateral with Macron. You're not expected to watch. It's irritating.

I did a crossword in another window as that played and the whole time I was thinking, Man, that Macron sounds like a total jerk. I switched windows a couple of times and sure enough he was being a total jerk.

Nothing is lost in translation. Even speaking English there is no substance. Macron is air. He speaks a million words and says nothing.

What a little dick.

It must be noted that Trump doesn't pick these fights, they do. We see this consistently. Some celebrity makes their views known and Trump smacks them back. The celebrity smitten can't believe that a Republican actually snapped back so they snap off again and Trump smacks them again and again and again. Then because Trump behaves differently media describes Trump as thin skinned and petty.

Our allies are no different. The original smiting is in NATO members not paying their target 2%. That's the original snipe, not Trump mentioning it. Trump is expected to behave as all previous US presidents and accept the grace extended to US presidents and US taxpayers the privilege of providing their national defense.

Trump made clear that NATO is more important to Europe than it is for the United States.

France expects the US to be there and defend it should matters ever come to that. So does Germany. While France refuses to allow US military to use French airspace and both countries slip on their commitment over years amounting to billions of dollars of defense negligence. Macron feels he can characterize NATO as braindead. Trump reminds them of this slipshod Socialist manner and that makes Trump a jerk. International fairness is not a Socialist trait. They require imbalance in trade with other agreements such as NATO or else their system doesn't work so well. They take longer vacations than Americans do. Their infrastructure is more up to date than American infrastructure is. Their healthcare is socialized to the extent that it becomes most of their government activity. 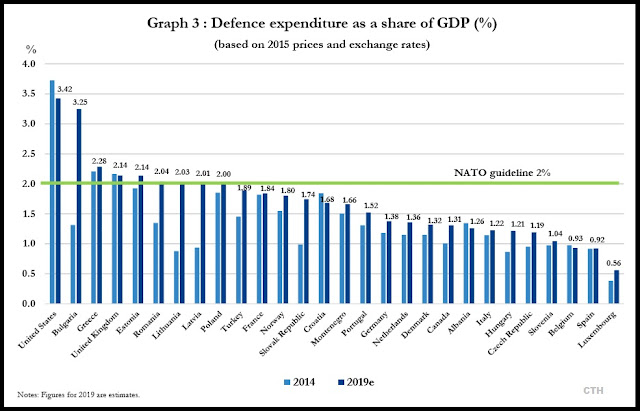 I think the chart embiggens.

France does better than Germany but worse than Bulgaria and Greece.

What's Bulgaria afraid of? They see value in NATO. France and Germany signal that they do not.

Trudeau also had a bilateral with Trump but that one turned out to be mostly the media questioning Trump. How embarrassing to sit there in your brown shoes and shiny socks and endure all questions going to Trump. Trudeau is so uninteresting, Canada too, the press doesn't even bother asking him questions.

I read that Trudeau then left the bilateral with Trump then went straight to 10 Downing and disparaged Trump.

I looked for a video on YouTube. Nothing like that showed up. Then I narrowed the search to "today" and only one vide appeared. This one. It didn't seem that bad. This morning I saw this video featured everywhere I turned. It's everywhere all at once.

The video shows Trudeau speaking to Macron and to Boris Johnson saying, "He's late because he gives 40 minute press conferences." Or something like that. Our president makes himself available to our despicably corrupted press and both press and other world leaders natter like stupid old women.

Now there are other videos of this same thing up to eight minutes long. But who wants to listen to these numb nuts that long?  Nobody does. That's who.

Trump made his point. NATO is more important to them than it is to us. Now, act like it, or stfu.

It's Trump saying, "Your breath is very bad. Has anyone told you this?"

And bad as socialists are in getting others to pick up their tab so that their system can work, communists are even worse. All that applies to Europe and Canada applies to China X10.

Now, when asked is Trump going to let Trudeau get away with what we see?

Trump likes the guy. But he's two-faced. Can you argue with that? He's a nice guy but his breath is very bad. Does anyone tell him that?

That one bad breath interview made decades ago demonstrates so very much about Trump. He will call you out on your observed behavior. Just make sure you bathe and brush your teeth, shine your shoes, wash your car before speaking to him.

Trump's message is not in code. Rarely will you see anything this straightforward, this accessible, this open, this uncloaked, this distressingly honest. But when you have parties that will constantly distort everything, when you have enemies who always take advantage of your openness, then those proclivities can be predicted, those impulses can be used.


I've been observing politics a very long time and I've not seen the likes of this.

This morning I had another blood-draw from Vampires R Us. I meant to say Quest Lab.

That place is ace.

They always have a parking spot for me right at the front.

Their security guard always sees me and opens the door automatically from the inside.

Their check-in is simply me entering my phone number into a kiosk keypad boom done.

Within minutes a lovely technician opens the second door for me. There is a never a wait.

The blood draw really is just a pinch. That's not even a euphemism. That's what it really is.

Over in two minutes.

But my slot is thirty minutes.

I ask her if she's watching the impeachment.

She says that she hasn't been keeping track.

I say, "Good for you. Most professionals don't have time for this crap."

She was more interested in my pie. I detailed my pie.

The last time I detailed my garden.

That's what professionals have time for.

Seems more those NATO leaders(?) were bitching rather than joking. But the whole thing reminds me of this scene.