Trump in Hanoi with N. Korea

Don't you just love watching masters at work? I didn't expect this, yet it's not the least surprising. And watching with only my own eyes and not allowing the interference of corrupted American legacy media that has nothing to contribute that's useful. From choosing Hanoi for venue with the photographs of throngs crowding the hotel like a MAGA rally, that cannot be shown here and discussed honestly, to Trump's stated negotiation tenet of never entering a negotiation that he's unwilling to drop.

Obviously Kim wants the sanctions removed immediately and he wants to keep elements of his nuclear program secret.

You might think it odd that two new friends can break it off so dramatically. And with so much at stake that Trump is not even a little bit more accommodating as all previous US presidents have been -- so they could come home waving around a treaty that proved their earnest wish for success.

While Trump negotiates like a NY real estate developer making certain his foundation is sound. This is showing there is much more unseen than denuclearization of the peninsula. It shows that Trump is not negotiating simply with N. Korea. He's actually negotiating with China. Trump is attempting to outmaneuver China and actually wrest N. Korea from China's grasp. If Kim holds forth and doesn't flake out, Trump can promise N. Korea a new life free from China. Trump has stated repeatedly that N.Korea holds more economic promise than any other country in the area, and Trump has stated repeatedly the reasons why that is so.

They've had negotiations in S. Korea and now in Hanoi. Kim already knows what prospering  countries look like. And now he's negotiated with Trump in two such countries in his own immediate area.

It was China that did this. Having extended their stay in Washington to continue forging their own deal with Trump, and Trump having granted an extension of the date that round 2 of tariffs kick in, China felt they could push unhelpful issues. This is China's way of dealing with Trump and this is Trump's way of responding to China. It is Xi Jinping and Trump shoving each other, with Kim in the middle. Expect both Trump and Xi to put on their pleasant Panda masks and reaffirm how much respect they have for each other and how great their friendship has grown. 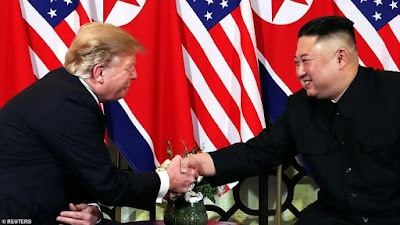 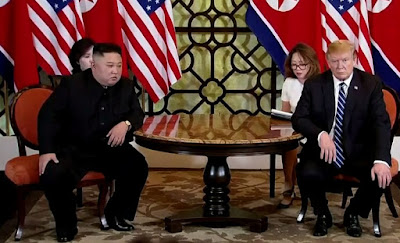 That's okay. They'll be back again with an even stronger deal.


This is irrelevant to you, but not to me.

My dad used to give me a job and then sit there and watch me do it, correcting me along the way.

"You missed one of Spot's spots."

And the whole time I'd be thinking un-tender familial thoughts like "Shut up, you fucking lazy ass bastard. I hate being a slave."

Ew, I hated that.

He was actually lovingly teaching me. Spending time with me. But it felt like a bootcamp and I didn't enlist. I hated him doing that. And he did it constantly. So I hated constantly.

I made my own childhood miserable. By not recognizing firm instructing as love.

Then I grew up. Along the way I became quite adept at painting rooms. I have a way that is mere side-benefit of being an artist. I can do trimming like nobody's bizwax. I mean it. I carefully load the brush  intuitively with the exact right amount of paint, hold the brush at the exact correct angle for the paint to flow off at the exact amount of paint-depositing. I apply pressure that spreads out the bristles just so. Then run steady long strokes down the edge of anything; door jamb, window pane, dust board, upper corners meeting the ceiling. Then redo that with thicker layer less carefully and less close to the edge. So the paint layers are feathered and blend with the larger areas that rolled.

I'm awesome at that. I am. And it really is something to watch. No tape, no newspapers, no nothing. Just me standing there with a paintbrush and paint. And wet rag for the occasional drip. It happens sometimes.

I painted my dad's den.

While I was at work I called my dad and asked him how clearing out the room was going.

When I got there after work he had dragged into the room every tool known to paint shops. He had lined the edges of the floor with newspapers, taped to the floor. He had buckets, drop cloth, paint trays, paint rollers, extension poles, a variety of paint brushes, shop vac, extra lighting, and lighting stands, extension cords coiling all over the place like a gigantic snake pit for orange snakes. The room was more cluttered with tools and with paint preparation than it was fully furnished.

"What? Why? These are tools that you'll need."

"I'm a klutz. All this stuff is in my way. The room is best with nothing in it. That way I can step backward without stepping into a tray of paint. I don't need all this newspaper. It's all in my way.  Not having it is much better than having it."

"But what about drips?"

"You're telling me that you don't drip."

"Okay then, Sport, have it your way."

He removed all his precious tools that he dragged in for my benefit. He doesn't understand me at all. He did not want to remove everything. He wanted me to be prepared. His odd child is always doing the counterintuitive thing. His weird boy is always doing things backwards. And now I'm grown up and insisting. He cannot boss me around with his superior knowledge.

When finished, he pulled up a chair and put legs up on the railing that divided the dining room from the den, and he watched me.

As he had a million times before.  He just sat there and watched me work in my simple way. Previous to that moment his watching me work would have flat pissed me right off. But this time I liked it. I had finally matured to the point that I actually enjoyed having my dad watch me work. Instead of helping me physically. This time I didn't want him touching the paint or a brush. He'd just mess it up.

I was painting the trim surrounding the sliding glass door when a single drop of paint dripped onto the door track. I had my wet rag right there to wipe it up. But before I could do that my dad yelled loudly into the rooms behind him.

WTF, calm down, Old Man, that one drip is not worth covering the entire floor with newspaper and rolls of tape that people use to carelessly slop on their paint. The pure artistry of my careful and quite fast and impressive technique in which you sit there and marvel is all left uncommented upon while a single drip causes extreme glee.

That's the reaction that's shown to me.

While later among his own friends he brags about the way his son painted his den.

Legacy media is my dad watching Trump work. I don't watch their work anymore. I'm assuming that they're presuming to know how all that is done much better than Trump does. I'm assuming they look for and pounce on his drip.
Posted by Chip Ahoy at 11:27 AM

You get it more than the Lefties.