The Bada Bing is no more! 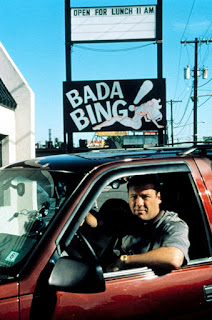 Satin Dolls in Lodi was forced to sideline its naked ladies — and cease all other live “entertainment” — under a court order that shutters the jiggle joint for allegedly hiding money from the state, sources said Monday.


The strip club on Route 17 — which appeared as the “Bada Bing” in the hit mobster series — must either sell or transfer its liquor licenses by Jan. 3, according to a court order filed by state Attorney General Christopher Porrino and the Division of Alcoholic Beverage Control.
Owners of the nightspot allegedly hid cash from the state and allowed reputed mob associate Anthony “Tony Lodi” Cardinalle to run the place, according to the court order.


“The Cardinalles may have wanted to keep the business in the family, but that’s not how it works. Their continued flouting of Alcoholic Beverage Control laws cannot and will not be tolerated,” said Porrino said in a statement earlier this month.
Cardinalle was barred from running the strip club amid racketeering charges linked to the Genovese crime family illegal waste disposal operation, officials said.
The club legally serve can still serve drinks until Jan. 3. A.J.’s Gentleman Club, which is under the same ownership, will also be forced to shut down by Jan. 3.
On Monday, a rep from Satin Dolls said, “No comment — but, yeah, we’re open.”
The club and its owners were the subject of an investigation by the Division of Alcoholic Beverage Control for more than six years, according to officials

(New Jersey has weird liquor laws. They only issue so many per town and county. Not like New York where they are no limits on the number of licensed establishments. It is sort of the same thing as taxi medallions in the city. You know. An avenue of graft and corruption.
In the early eighties a friend of mine was one of the first to be very knowledgeable about the internet. We set up a company to make up websites and we approached "Flashdancers" a big club on the West Side to set up an internet presence. A website. Private chats with credit card payments. You know what is standard now.
Everything was cool until we met the real owners. They were "Friends of ours" who wanted everything for nothing. We backed out of the deal. They went on to make a lot of money and get several indictments.
You have to know your limitations.)

To me The Sopranos is without doubt far and away the greatest TV show ever. Not because of the hit scenes or the beatdowns or the depictions of the goombah lifestyle. Because of the paranoia. There isn't a single major character who isn't wary, who isn't on guard against what might happen. Against what the others might do next. Against the inevitable bad stuff up ahead. Paranoia. Which is the human condition. That's why The Sopranos is a universal show. The realest show ever made.

Along with "The Wire" it is definitely one of the best TV shows ever made.

Hey maybe it is time for a top ten list.

Never been much attracted to Sopranos. Have never seen and episode, but ricpic makes a compelling case for it. I do not doubt it's excellent.

I recently rewatched The Wire. I have seen the Sopranos at least twice, some epis three times. Last week I watched Boardwalk Empire, in which Tony Soprano's cousin Tony Blundetto becomes mayor of Atlantic City and his Uncle Jun goes to work for the Commodore using the name Leander.

Did you know that Presbo, after being kicked off the Bawmer pleece force became Elliot Ness? Little known fact, right? And his sidekick Herc later achieves fame as Ralph Capone. And Alphonse himself is played by a guy from Lancashire, England. And Omar later is known as Chalky White.

How are such transformations possible? It's Hollywood magic, I tells ya!

We just binge watched the 2 season Hulu series, Chance. It is superb. It stars Hugh Laurie as a neuro-psychiatrist who, w/ the help of an iconoclast[played by Earl's brother, Randy], turns into a Dexter type vigilante. It is well written and smart. The actor who played Lester Freeman in The Wire also stars in this series. The suits have not yet decided on season 3 but it is set up perfectly to continue. The unlikely relationship between the shrink and the hit man furniture repair guy is quite interesting.

The Tax Man got Al Capone AND the Bing.
Every single character on this show was compromised by the connection to crime.

Chance sounds very promising, though I didn't like Dexter. That was too much and over the top for me. Laurie was great in House.

Speaking of House, a guy showed up in Boardwalk Empire and I thought "Hmm, I have seed that dude before". In BE he played a guy who was schmoozing Gillian Darmody, and it turns out he was working undercover for the Pinkertons trying to get Ms. Darmody to confess to murder.

Where do I know that guy from? Turns out he was a do-gooder TB patient on House.

And another thing, the Dead Rabbits turned up on Hell on Wheels.

But, as was the case with Deadwood, HoW, BE and even the Sopranos, to a lesser degree, were full of anachronisms, mostly related to word usage. Some things they did very well, like the six shooters, but such language!

And don't even get me started on how wrong the trees were on all those series - seriously, people - some of us, well me, anyway, notice that stuff. British Colombia is very different looking than Wyoming or Utah.

Don't get me started on Longmire - Indians played by Filipinos, New Mexico being the stunt double for Wyoming, sheesh!

In the immortal words of Arthur Fonzarelli, "Dey can't tear down a national shrine".

PS Sopes were never my thing.

Wink...I was just ragging you!

I started The Night Manager, but need to finish it one day. Thanks for the tip on Chance. Thing is, you pay for the internet, Hulu, Netflix, and buy stuff from Amazon, like Project Runway and Veep. It does add up even if you don't get cable.

Sixty, if you watched NCIS you might know Ziva, an Israeli, was played by a Mexican gal. She was a super character.

The cast of the Sopranos were given the best roles of their lives, but the catch was they couldn't be sure from season to season how long they would survive. Tony Soprano was the exception, but most of the others could be offed on a writer's whim. Their life on the Sopranos mirrored to some extent what life in the mob was like. I always thought Tony's son would get it. Heir today, gone tomorrow.

The Night Manager was very good. Laurie is a talented actor.

William, I always hoped Tony's son and daughter would get it. Both were annoying and horrible actors.

I've been to Bada Bing.

The girls don't get naked. That was pretty disappointing.

I believe they sold liquor and you can't combine nudity and selling booze in NJ.

I watched that show years ago when I had broadcast tv. I remember Ziva. She is hard to forget.

But what I find interesting, amusing, funny, whatever, is that all of the odd sidekicks, for example Abby on NCIS, can trace their existence back to Kooky on 77 Sunset Strip. How weird is that, eh?

Anthony Jr. did a pretty good job playing an annoying spoiled brat. The girl that played Meadow really was terrible.

But it took me a couple of viewings to realize that Livia and Janice were played by great actresses - I couldn't stand them and that was the point. Upon further review I saw that Nancy Marchand truly was brilliant.

And in addition to being Tony's mother she was also Frazer's mother. Go figure - they didn't seem like brothers.

I don't follow. You mean the wacky sidekick concept?

That is precisely what I mean - per Wiki "Comic relief was provided by ... Gerald Lloyd "Kookie" Kookson III (played by Edd Byrnes), the rock and roll-loving, wisecracking, hair-combing hipster and aspiring PI who worked as the valet parking attendant at Dino's, the club next door to the detectives' office."

Dino's was a real place, owned by Dean Martin. I think alcohol was involved.

But back to my point - every one of the detecting shows after that had to have an oddball sidekick - someone with odd hair, funny clothing, odd mannerisms, and so on. Talk about a formula! But in this case, it is a venerable formula.

Sixty, That show took a hit when Nancy Marchand died. But, w/ great writing they recovered quickly. She lived on in Tony's therapy sessions.

I should have looked at some clips. I don't remember the show, just the theme song. My sisters and I would sing it. Huggy Bear from Starsky and Hutch is a prime example.

Love the Sopranos. I binge watch it every few months. Meadow's boyfriend Finn was played by Will Janowitz, who appeared in Boardwalk Empire as Hymie Weiss in a few episodes. There were a lot of people involved in both shows, actors, writers, directors. Quality production.