Social Justice Warrior Sophia Bush won't give a straight answer as to why she left Chicago PD TV show. 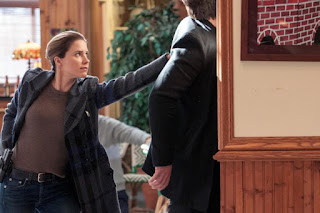 Sophia Bush compares ‘Chicago P.D.’ to being ‘trapped in a burning building’

By Kirsten Chuba, Variety from the New York Post December 19. 2017

Sophia Bush shocked audiences earlier this year when she left “Chicago P.D.” after the show’s Season 4 finale. On Refinery 29’s “UnStyled” podcast, Bush opened up for the first time about what made her leave her “dream job.”

“I landed this job that, since I was 20 years old and trying to become an actor, I said I wanted. And aspects of it, don’t get me wrong, were wonderful,” the actress said. “But I knew by the end of the second season I couldn’t do that job anymore.”

Bush played Detective Erin Lindsay on the hit NBC show for four years, and had previously refused to discuss what made her leave the role beyond saying in an Instagram comment that “I left because I wanted to. End of story.” She said during the podcast that between Seasons 3 and 4 of the show, she sat down with her bosses to discuss her experience on the set.

“I said, ‘Here’s where we are. Here’s everything you’re aware of. Here’s how I’m coming to you today. If something really drastic doesn’t change, I’m leaving at the end of the year’ — because I understand how the business works and how women are treated — I said, ‘I’m giving you not two weeks notice and I’m not coming in here throwing s–t and breaking lamps and saying I’m never coming back. I’m giving you 23 episodes notice. I’m giving you that much time,” she recounted.
She added that she told them, “‘There will be no conversation in which I was hysterical, emotional, in which I was being a ‘irrational female’ or whatever you want to put on it. I’m literally sitting in front of you like cool as a cucumber. If this has to be like a big swinging d–k competition, I promise you I will win. But know this now: if we’re not having a very different conversation by Christmas, then you know with 100 percent certainty in December that come the end of April I’m leaving.’”
She described the experience as feeling “like I was trapped in a burning building… I was miserable and I had to go.” Universal TV, the studio behind “Chicago P.D.,” has not yet responded to Variety‘s request for comment. Bush’s character was written out by accepting a job offer with the FBI in New York City, taking her away from Chicago.
The actress, who has previously starred on “One Tree Hill” and was featured on “Chicago Fire,” “Med,” and “Justice,” recently made a talent and development deal with 20th Century Fox TV to star and produce in an upcoming pilot.
(I find this story to be quite interesting. I follow all of the "Chicago Shows" since they appear on Hulu. They are just about the only current shows you can get without cable.
They are produced by Dick Wolf the douchenozzle behind "Law and Order." It is a series of interelated shows that share characters. Chicago Fire. Chicago PD. Chicago Med. The recently canceled Chicago Justice. I find it interesting as I do not know Chicago and they have pretty good location shots.
Sophia Bush was the second lead on this show. She had a lot of screen time and a lot of storylines. She really had no professional cause for complaint. If it were sexual harrasment I am sure she would have been front and center as she is a nutjob social justice warrior. The only thing I can figure is that it is an "anger issue" having to do with the star of the show Jason Beghe.
He is a very interesting dude. Former Scientologist he broke with them and is an apostate. He was forced to take anger management courses by the network because of his "inappropriate comments." Not sexual comments. Just being angry about he screw ups on the set. So he has to walk on eggshells.
Now he plays an full  out scum bag on the show. A cop who is really more of a criminal. A guy who beats up suspects, steals drug money and even murders people. In league with the mob and crooked politicians. As a method actor you can kind of see how his approximation of rage and anger can get the better of him. Would they have done this to Brando? James Dean? Pauly Shore? I just don't know.
In any event nobody misses Miss Bush. She should have consulted the Pernell Roberts rule under the David Caruso subsection. Most actors are interchangeable. Especially women. You can always get another piece of ass. A younger one with better more perky tits. The show went forward and didn't miss a beat.
You know she is really just a piece of eye candy. Real detectives don't look like that. Most of them are pretty much dyke's in my experience. Not glamor girls who rough up perps in high heels and tank tops. So we already have to suspend disbelief watching her and her absence is no loss.
A real irony is you know who was a famous case of younger piece of ass who replaced a troublesome female star on a hit TV show. Rose McGowan who replaced Shannon Doherty on "Charmed." How about them apples. Or cantaloupes. So to speak.
Listen I get that sexual  harassment should not be tolerated. Nobody thinks that is good.  A real man doesn't have to sexually harass a broad to get a little trim. A couple of drinks and a eight ball will normally do the trick. Allegedly.
But the star of the show being a dick? Seriously. Suck it up buttercup. What a moron.
GET OFF OF MY LAWN!)
Posted by Trooper York at 12:45 PM

Labels: GET OFF OF MY LAWN, Name that TV show, SJW

She does seem quite pleased with herself. Giving ultimatums to her boss. Who does that in real life (as opposed to scripted PC tv shows that are not even vaguely realistic but for some reason people still watch them and carry over the unreasonable expectations into their actual lives as, apparently, do the actors, hmm maybe that's a clue right there)?

Am, it looks like she went out of her way to give notice. And if her co-star's anger issues were the reason, she's not telling tales out of school.

Told as only Trooper York could tell it. Elmore Leonard lives!

You crack me up.

Your ending forced me to recall a show on tv about the dating scene in New York. A middle aged schlub is shown in the bathroom in front of mirror trimming the hair in his nose. He explains to the camera, "I gotta do this trim job so I don't get stuck dating no dogs. Who wants to date a dog?"

He's a dog himself, complaining about having to perform a little personal hygiene because women who don't bother with the little things are automatically dogs.

So when he gets married all that extra effort to be presentable suddenly stops.

"The way this is reported it seems like she made the boss guess about the problem that was causing her to decide to leave unless things changed."

Could be. Or maybe she said what the problem was to the boss, but did not publicize it. Ziva left NCIS over money. Tony was paid more. I certainly thought she brought just as much to the show as him. But he'd been there longer, I guess.

If Trooper needs some plot ideas for a book, I'm sure we could come up with something.

Pernell Roberts, for those old enough.

It is a series of interelated shows that share characters.

Warners did the same thing when it was king of the hill on ABC in the mid-50s - early 60s.

Except those shows were cool.