Simple point. We've heard the gripe before. Obama responds with videos of himself saying Merry Christmas. The point remains, the trend is to commercialize the heck out of a Christian holiday while skipping its Christian origin. And Obama card is part of that.

There is nothing in Christian teaching that says adherents must celebrate the presumed birth of Jesus for his gospel, his good news, not that he died to erase our sins as commonly believed, rather, his teaching that we're all sons and daughters of God and we're loved in the same way parents love their children, that he loves us so much that he came here and lived among us, is so enriching, so profoundly different and elevated beyond other religions, that believers through ages did all this themselves. You cannot jump on the Christmas celebration bandwagon, profit by it, and skip the birth of Jesus. Now join hands around the cash register and sing Jesus Loves Me. 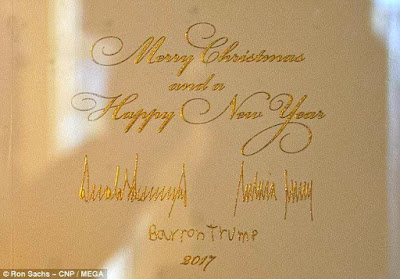 The comments at American Digest ignore the point of the post and devolve immediately to cursive writing. "Donald's and Melania's signature sure is pointy." And, "Barron needs to learn cursive." And,  "They don't teach that in school anymore."

Parents are teaching their children cursive at home because it's not taught in school anymore.

Oh man, this causes a flashback so hard I'm forced out of body and time displaced over here.

Boom. I'm in the first grade. Sitting at a tiny desk with a girl next to me. I am slow on the uptake. I am not getting this connect the letters thing. I connected them all in one long string. The whole paragraph connected. The girl sitting next to me, bless her, said, "You're doing it wrong."

"You're supposed to leave gaps."

"Well then, how do I know where to have gaps? Gawl!"

This was going to be another of those random language things thrown at me just to make language more difficult. Adults are wicked.

"The letters in each word are connected. Each word is one thing. Leave a gap between each word."

"These letters are changed a little bit so you can do that. You don't have to lift up your pencil all the time."

She is a genius. She had everything figured out way before I did. And this wasn't the only thing she broke down in terms I could understand. She explained a lot of things that happened in class. She is the girl who explained to me during class why we praise God for things that people do. The teacher remarked, "Thank God, the man jumped in and saved the family from the car in the river." Why does God get credit for the thing that the man did? No fair. The teacher skipped right over the hero and gave her praise to God instead. I told the girl, that is not right. She answered cooly, God made the people who do heroic things. Then, when I said, "No he didn't. Their parents made the people who did heroic things." Then she said, "God made people." And I go, "Evolution made people." And she goes, "God made the earth. God made evolution possible." And I'm all, "Oh. Okay you got me. You're really good at this."

Recall the witness in Zimmerman trial given a handwritten note in court, critical to her testimony, and asked to read it. To the embarrassment of all Americans watching, and giving the lie to her previous testimony,  she said, "I don't do cursive."

Not I can't read cursive. I don't do cursive. As if that was her choice not to bother.

And mixed with embarrassment for her not reading cursive in English is full empathy and compassion. I still cannot make any sense of hieratic no matter how hard I try. Some of them come through but not many. Only the most explicit. Here look for yourself and see what I mean. All the rest are too similar to each other that the slightest difference in handwriting style throws off the whole thing, and it's all nothing but idiosyncratic handwriting. I totally understand the woman not comprehending handwriting. Japanese / Chinese kanji is the same way. The handwriting versions are sloppy messes slapped on with an overloaded brush. You have to be good at recognizing to get them. I'm watching The Samurai Gourmet and looking up kanji I cannot recognize and it's all cursive and hardly anything matches.
Posted by Chip Ahoy at 6:00 PM

I learned cursive from my 3rd grade friends. Well, at least the curse part.

Kids are taught they won't need it (we called it script) because everything has a keyboard, virtual or otherwise. Much as the way they don't learn phonics.

If AFT and NEA supported Republicans, they'd be arrested for child abuse.

Samurai Gourmet is an awesome show - are any new episodes available?

Visual learners sometimes need a different approach. I once worked with a 3rd grader who was stringing his sentences together using a period at the end of one and situating the Capital of the next immediately alongside with no space left between. When I suggested he try using two periods, in order to visually create the amount of space needed for the sentence to breath, he loved that idea and was going to town with two periods creating just the right spacing between sentences until the teacher stopped by the table to set us both straight by saying that just wasn't done. She was right, it isn't done in the long run, but on that day it worked as it allowed him a way to see and understand the size of the space that needed to be left.