The Walkin' After Midnight Open Thread 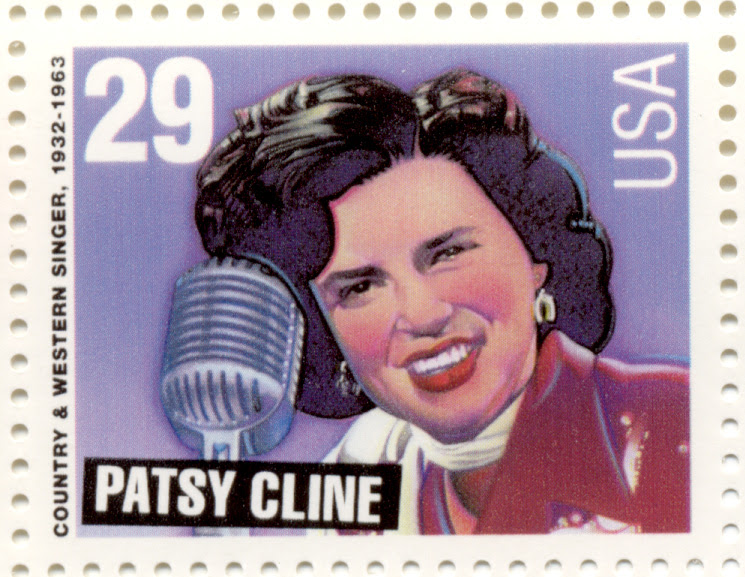 50 years ago last March, Patsy Cline tragically died in a plane crash. Her songs rhymed with heartache, loneliness, longing, regret, and mismatched pairing, but their unifying theme was love. Her first hit – 1957's "Walkin' After Midnight" – made her a crossover phenomenon: a female artist who could chart both country and pop. A string of hits from 1961 to 1963 immortalized her. She, like Kitty Wells before her, opened doors in the very heart of flyover country. 50 years on, Patsy Cline thrives on the Internet.

Patsy Cline also belonged to a time when singers could still credibly sing others' songs. The Beatles and The Beach Boys helped kill that in pop music a short time later, making it uncool to record anything but one's own songs. I respect that – genius songwriting, genius playing and genius singing all rolled into one – because it's rare. But what about the beautiful voice who doesn't write songs?  Or that songwriter who really can't sing (Bob Dylan)?

The words of "Walkin' After Midnight" evoke:

I stop to see a weepin' willow
Cryin' on his pillow
Maybe he's cryin' for me
And as the skies turn gloomy
Night winds whisper to me
I'm lonesome as I can be.

Compare that to Hank Williams' "I'm So Lonesome I Could Cry"

I've never seen a night so long
When time goes crawling by
The moon just went behind a cloud
To hide it's face and cry.

That's rural angst and not the sort of loneliness people feel in cities -- is it?

Here is the original 1957 "twangy" version of "Walkin After Midnight":

Patsy was a great singer and a generous one to other talent. A class act.

Was she the first member of the tribe to break into country music?

For some reason C&W singers have the best biopics. There are no films planned on the lives of Mary Martin or Ethel Merman. And what about Pavorotti's tragic addiction to food. A lot of drama in that life.

Gerald Cline was from Frederick, Maryland, and the Clines resided in Frederick for some time.

There are still people there who claim to have known her, or gone to school with him, but since that place is crawling with Hessians named Cline or Kline or Klein or Poffenbarger, who knows what the truth is? I lived in Fredneck for a while, too, and am glad to be far away from that hellhole.

When you heard her sing, you knew all the angels weren't in Heaven.

It's Tompall Glaser & Brothers, not Glazier

Patsy Cline is really before my time, but I remember hearing her songs as a kid and thinking it was good stuff; I still do.

Sometimes I'll be out somewhere, getting a sandwich, and if there's a jukebox, I'll buy some songs. I'll often pick a couple of Patsy songs (I also go for Sinatra, Ray Charles, Johnny Cash, Roy Orbison, but also things from Kansas or Journey, and Moody Blues).

And I've noticed, more than once, people much younger than I (I'm 51) really grooving to Patsy. Sometimes they'll thank me for picking her.

Or that songwriter who really can't sing (Bob Dylan)?

OK, that was mean of me. I'd rephrase that "or the songwriter who writes songs greater than his own voice."