Summing Up the Iran Agreement 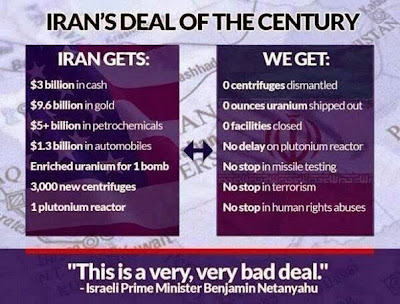 No wonder there were celebrations on the streets of Teheran.

Israel knows they are alone w/ this corrupt Chicago gang in the WH.

Why is there any surprise that Obama, and his representative Kerry, got "punked" again?

BTW ... the "deal" is not an Article II Treaty with the United States party to it, as most non-proliferation agreements are...it is nothing but a sniveling response to a cynical mother-may-I by Iran, who will do as they please anyway..and the 6 month term assures it.

Aridog said...
Why is there any surprise that Obama, and his representative Kerry, got "punked" again?

The negotiator who stands to lose the most is at a major disadvantage. Somehow without even being a primary party to the conflict our representatives manage to act as if that's us. Primarily this is a result of hubris: our "leaders" desire to be seen as the one driving the peace in order to further their legacy.

Kerry's a fool, his people are fools, and Clinton was a fool before him.

Perhaps this is the beginning of the end for our domestic alliance between Jews and blacks.

Jews glommed onto blacks as political allies because blacks are the "enemies of our enemies" for Jews. That shared enemy is the goyim who are presumed to be only a step away from resurrecting the Third Reich in America.

Unfortunately, blacks have always been brutally anti-semitic, although they gleefully accept the swag produced by the erstwhile political alliance with Jews.

Obama seems to be enacting the black side of the agenda here, by undermining Israel in favor of a Moslem state, which is closer in ideology to that of U.S. black leadership. (Louis Farrakhan and the National of Islam are power players in Chicago!)

Let me quote Professor Ingrid Wuerth on another aspect of this "deal":

On the question of whether this agreement is binding, it will be interesting to see whether Congress is notified of the agreement pursuant to the Case-Zablocki Act. That Act requires the Secretary of State to “transmit to the Congress the text of any international agreement (including the text of any oral international agreement, which agreement shall be reduced to writing), other than a treaty, to which the United States is a party as soon as practicable after such agreement has entered into force with respect to the United States…” But under the relevant federal regulations, the statute only applies to agreements for which “the parties” “intend their undertaking to be legally binding, and not merely of political or personal effect.”

All those billions given to the Iranian mullahs: your tax dollars at work.

ricpic said...
All those billions given to the Iranian mullahs: your tax dollars at work.

I suspect these amounts are us unfreezing external bank accounts in the US and Europe, not amounts we're giving them.

The "Catch 22" foot note, literally the last line of text in the agreement document is this:

* With respect to the final step and any steps in between, the standard principle that "nothing is agreed until
everything is agreed" applies.

The Choom Gang is so desperate for anything to work, they'll take something that only looks like a success to the low intel voters.

Who needs friends when Iran already has them in the White House. I don't think traitorism even applies anymore to these people. They've gone beyond that completely at this point.

You would not want John Kerry as your lawyer...unless of course you wanted to lose.

Good News: The western world community that praised Obama with a Peace Prize now knows what a lightweight intelligence they have in Obama.

Bad News: The rest of the world now realizes how easy it is to manipulate Obama for their own interest.

Syria gets Russian guards to protect their WMD installations from rebels.

Iran gets 6 months of unfettered use of its centrifuges.

What's next? China gets to annex the Shenkaku islands? Argentina gets the Maldives? Vietnam gets Truong Sa lon? Germany gets the Czech Republic?

Argentina gets the Maldives?

Sure, why the hell not? The Maldives are in the Indian Ocean.


Did you mean the Falkland Islands, also known as, Islas Malvinas?

BTW, Obama already telegraphed how he would go on that by referring to the Falklands as Islas Malvinas...

That's right! There shouldn't have been any agreement to use for holding them to account! Yee-haw!

Why are you so often the first to comment on your own posts, Haz?

Apparently this gang here thinks the best way to achieve America's interest is to have them dictated to us from the office of Israel's right-wing prime minister. So why don't you all emigrate? Problem solved!

Why are you so often the first to comment on your own posts, Haz?


So that I an click the email box and receive everyone's replies in my inbox during times when I'm not at the computer.

People are so quick to judge. I feel certain that historians will not judge Obamacare to be Obama's signature debacle but more like his opening act.......I don't think anyone in the Middle East is capable of acting in their rational self interest. It should be remembered that Iraq and Iran brought poison gas back to warfare after an interregnum of three generations. And special props to Iran for using its children to clear minefields. Spare the minefield and spare the child. I don't think this diminishes the odds of Iran getting a nuclear weapon, but their history is so erratic and self destructive that there's a possibility that they'll use it on the Bahais before the Jews.

He went and punched a whole nation full of Jews in the head.

That's right! There shouldn't have been any agreement to use for holding them to account!

You mean like the Non-Proliferation Treaty Iran has been a signatory to for decades? :)

Oh, let's play Ritmo's kindergarden game: "Apparently Ritmo thinks the best way to achieve America's interest is to have them dictated by a country that held our embassy hostage for 444 days."

How did that workout for Jimmeh, Ritmo?

Yes he did. Isn't he just dreamy intelligent? Ritmo like carrying Obama's water.

You mean like the Non-Proliferation Treaty Iran has been a signatory to for decades? :)

What's the enforcement mechanism on that one and how is it superior to the stipulations just agreed to, Sir Blackstone?