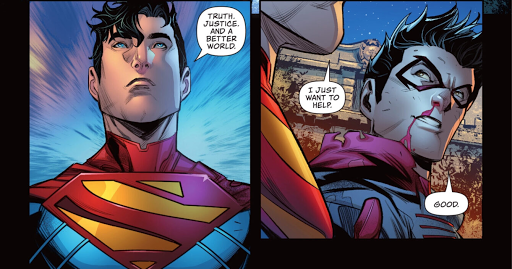 In a recent article in Bounding Into Comics we learn that the "New Superman" has done away with the "American Way" in his catch phrase. I am sure you remember it from the old TV series with the great George Reeves in which he strives to fight for "Truth, Justice and the American Way." The new Superman is his son Jonathan Kent and he has dropped any consideration of America in his thinking. In fact he is ashamed of America and hates it along with capitalism and the norms that made this country great.

This is a common problem with many aspects of American Life. The reason why it bothers so many of us is that comics were a big part of our growing up. We all loved Batman and Spiderman and Superman. We went to the movies and watched the TV shows and bought the comics. The 1950's Superman show was on everyday in the sixties. You would come home from school and catch it being replayed all the time. Now the powers that be are using their influence on the younger generation to instill hatred of America, capitalisms, Christianity and heterosexuality in their readers. Old heroes are changed into different genders and sexual preferences all in the name of political correctness. They can't invent new characters for these groups they can only destroy old ones. That is what liberalism is. Destruction of the pillars of our society. What made America great. Like Superman.

There isn't much you can do. Of course you could not spend money on their offerings which many will do and is the reason why the box office and television ratings have tanked. Independent comic book writers have begun to offer their own takes which are much more traditional and family friendly. Vox Day the blogger and publisher of Castalia House has begun publishing the work of old hands like Chuck Dixon which are worth your time if you are a comics fan. I know most of you are well past reading comics but you can recommend them to your grand kids and get them on the right path instead of reading the woke drivel that passes for comics these days.

I never thought I would see the day when Superman would hate America.

I was never into comic books but I noticed a change with millennials when I started reading the comment section in IMDB. That was over a dozen years ago. There was almost always some clown that would start their post with "This movie is racist because......" Westerns were racist. Outer space movies were racist against aliens. King Kong was racist against giant gorillas and on and on.
I figured these kids were either in school or just graduated. They no doubt were indoctrinated as the great white racist hunters and got gold stars when they could winnow one out. Now white kids are being taught that they are the racists. Where the hell were the parents when this crap first started? Education, sports, politics, business, this has infected everything.

The problem is that Superman was always sexually frustrated. Lois Lane was frigid, and even the man of steel couldn't melt that iceberg. That can mess up a man's head, which he also never got.

I wouldn't worry about it. I hear there's a New Superman vs Simone Biles series on the way, he'll never survive it.

They're losing them (insert punchline).

I figured these kids were either in school or just graduated. They no doubt were indoctrinated as the great white racist hunters and got gold stars when they could winnow one out. Now white kids are being taught that they are the racists. Where the hell were the parents when this crap first started? Education, sports, politics, business, this has infected everything.

A year at home with the kids made them realize what's going on. That's why parents across the country are raising Hell over CRT and, of course, homeschooling in huge numbers.

Welp, the teachers' unions got it right for once.

They said a year out of school and they'd lose the whole generation.

I love it when a plan comes together.