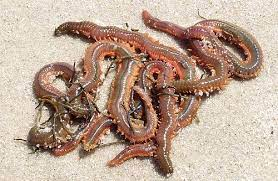 I must not fear. Fear is the mind-killer. Fear is the little-death that brings total obliteration. I will face my fear. I will permit it to pass over me and through me. And when it has gone past I will turn the inner eye to see its path. Where the fear has gone there will be nothing. Only I will remain.

Labels: Books, Whose that author

Frank Herbert - the mantra of the Bene Gesserit in "Dune". Good book; hope the new movie is better than the original...

As a reader, I always assumed "Herbert" was pronounced in the French fashion, but apparently he used the good ol' 'Murican style.

You are correct sir.

That is indeed Frank Herbert as quoted in “Dune.”

The sand worms were a dead giveaway.

पतञ्जलि)
I've been reading Patanjali lately and he was certainly into mantras and sutras.

The worm is the spice, the spice is the worm, and those two lines always annoyed my father-in-law who watched the first version of that movie.

I am going to go out on a limb here and suggest that if you watched all three versions of Dune, back to back, you would die.

LOL, you'd either die or become The Kwisatz Haderach.