The difference between NYC and Texas!

Two recent incidents perfectly illustrate the difference between NYC and the rest of the country. 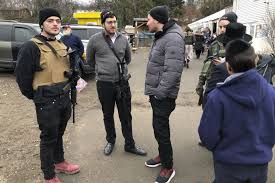 A good guy with a gun beats out a bunch of bullshit about gun control.


I have been detailing the attacks on the Jews in Brooklyn the last few years. So I was not suprised at all at the continuing attacks. Or at the fact that DeBlasio and the fake news media blaming it on Trump and the "Climate of Hate" coming out of Washington. Now we have the added bonus of Al Sharpton going on MSNBC to say that Antisemitism is wrong when it is the basis of his whole career!

Listen my advice to the Jews is to get some guns. Don't depend on the cops or the politicians to defend you anymore. You used to have political power. It's all gone now. I know you vote as one man but you are a real minority now. You have been swamped by the blacks and the Hispanics and the illegals and the Muslims and the Chinese and the hipster assholes who are extremist liberals. You need to either move or get a gun. Of course moving is not really the answer. Look at how that animal followed you out to Monsey which is in the suburbs.

The photo is in front of the synagogue where some of the yeshiva boys are openly carrying long guns. Now New York State is definitely going to come down on them because God forbid that they defend themselves. They need to use their political power to make their county a "sanctuary city" for the Second Amendment the way they are doing it in Virginia. The Jews in Brooklyn have a bigger problem. They have no right to defend themselves. They do have lots of money though. I think they should hire Blackwater or some other contractors that have legal carry rights to patrol their neighborhoods and defend their places of worship and schools. Don't depend on DeBlasio. Don't depend on the cops. They can't even defend themselves from getting punched in the face. Use what you got. Pay the Dane geld or suffer the consequences.

Great thoughts on a New Year.
Posted by Trooper York at 4:28 PM

Labels: Black lives matter?, I know bullshit when I smell it, Is it good for the Jews, knockout game, Savages

I think in an act of civil disobedience they should purchase and train w/ firearms en masse. Force the issue.

Agree with nd. Wilhelm and Andy will not protect them.

Interesting how, as the new millennium unfolds, it is neither coast that is the focus of the country, but the Lone Star State.

The best defense is self defense.