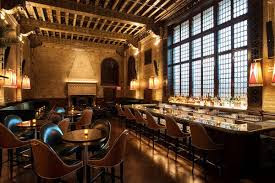 I'm really not a big fan of New Years Eve drinking. I mean it is the same bullshit as Paddy's day. I used to  drink all the time. Every day. So I didn't need to go over the top to prove I was Irish or that I was happy that we were having a new year! I like to stay home and eat potato puffs and pigs in a blanket and watch Dick Clark having a stroke. Which is what we are doing this year. No Dick Clark but Ryan Seacrest and Andy Cohen who like to stroke a dick. So to speak. Still they are amusing little homo's,

Anyway one year the wife convinced me that she wanted to do it up big for New Years. I rented a tux and we went to the Campbell Apartment which is a bar over Grand Central Station. It was originally the apartment of a Railroad Robber Baron guy. They turned it into a bar. The key attraction was that they had a big band and a Frank Sinatra impersonator. So we got to listen to music and enjoy champagne and can of peas. It was actually fun. After the ball dropped we ventured into Times Square. The crowds had dissipated and we went to Kevin St James which was the bar that Lisa was managing at the time. We hung out until dawn. It was a lot of fun.

I hope youse guys enjoy your New Years Eve. I hope Lem picks up a lot of people. In his Uber of course. I hope Sixty enjoys stroking his wood as he welcomes the New Year. Momma M can think of new insights she can share with us in the New Year. Chickie can come up with some more great music that I am not familiar with to enjoy. Dust Bunny Queen can post some of her old recipes in the New Year to take up the lack. I especially hope that our friend Chip will decide to come back and share his inimitable talent.

I don't like the New Year Eve tv shows. I would rather watch an old movie.

I like the drinking and eating part, but that is better done at home.

Happy New Years to you all.

I do join you in hoping Chip comes back. I already miss his posts.

Happy New Year to all, God bless us, every one!

Inimitable is a good word to describe what's gone missing. Inimitable also describes the talent revealed in your true, or maybe semi-true, or possibly fabricated or bolstered up stories from real life, along with the underwired and silicon enhanced tales that show up alongside the old fashioned goodness and imaginations that's part of being a good raconteur, or maybe a mythologist, or possibly a pretty little ... well, you know how it goes.

Happy New Year to you and Lisa, Trooper York.

Happy New Year. The great Roberto Clemente died this day 47 years ago. Doesn't seem that long ago. It was my melancholy 20th birthday. I loved watching Clemente almost as much as watching Mays, Mantle, Aaron, and Hector Lopez.

Nick, that was a sad day.

May you find yourself in better health this year, sir.

And the best to all the Lemmings.