Although my diet has changed my weight has not. And although I still consider this recent weight gain temporary I still need more pants in this size. It's kind of cool, actually, I've only been waist size 33 once before and that didn't last very long. Still, while I'm here at this size I need pants. And like all the previous waist sizes, 29, 30, 31, 32, in my length 36, I find Levis never has the colors I want. Never. What's wrong with them? 33 is a bit loose but I'm kind of liking loose pants. I have to pull them up all the time.

These dyes sure get a lot of complaints. But I had fun dying pants orange and red. They worked very well on cotton fibers.

What follows is the best most useful product review that I ever read on Amazon. It contradicts all the negative reviews and makes them sound silly. The process of dying is involved and a bit weird.

I bought this kit to dye a few white t-shirts that I've been using as undershirts for the last few years. The t-shirts had perspiration stains under the arms, but I love the fabric and fit so much that I wanted to see if I could rescue them. Now, all the dyeing websites will tell you not to work on old, stained clothing. That is probably prudent advice, as I'll discuss later! I was willing to take the risk, especially as practice learning how to dye in case I decide on a larger project down the road.

What I love about this set is that it contains the printer's primaries -- cyan, magenta, and yellow, plus black -- so that you can mix your own colors. With just three shirts to dye, I could have bought three premixed colors instead of four primaries. But I find that a bit limiting, and wanted to have fun mixing my own. This kit also includes enough soda ash to do about 5-6 dye baths (bucket method), but if you run out, Arm & Hammer Super Washing Soda is 100% soda ash and readily available for a few bucks at the grocery store or drugstore.

I dyed my shirts using the immersion method in a 5-gallon bucket (actually, mine was a 4-gallon kitty litter bucket). You can do this in the washing machine, but you have to use a lot more dye, soda ash, and salt, and you still have to babysit the machine to make sure it doesn't start the rinse cycle before you're ready. I find it more economical and not that much more labor-intensive to just do it in a bucket. For the first shirt, I was trying for sort of an indigo color, a deep blue-purple. I mixed 3/4 tsp. of the fuchsia dye and 1 1/4 tsp. of the turquoise in a mason jar and added a little bit of water to make a paste, then a little more water to get a pourable dye. I filled my bucket a little over halfway with water, added two cups of non-iodized table salt, stirred to dissolve, and then added the dye. Finally, I added my t-shirt, which I had dampened. After stirring off and on for about 20 minutes, I mixed 1/3 cup of soda ash into warm water in the mason jar and added a third of it to the bucket, stirred for 5 minutes, added another third, stirred for 5 minutes, then the last third and another 5 minutes of stirring. Finally, I gave the shirt another 45 minutes in the dye bath, stirring periodically. I put it in the washing machine, ran a rinse cycle, then washed it with detergent in hot water and tumbled dry. (This technique came from pburch.net, an incredibly thorough site on dyeing.)

You can see the result in the far left of the customer image I uploaded. It's hardly the indigo I was going for! In fact, it was a happy accident, because I was planning to turn one of the t-shirts into a raspberry color, and that's exactly what I got. But what went wrong? Well, I did a little research and learned that turquoise is a particularly finicky dye. On the Procion dye jars, it says to mix the dye into cold water, and that's where I went wrong. My research revealed that the water should in fact be at *least* room temperature, if not warmer for turquoise. I even saw some suggestions to put the dye-soaked fabric in the microwave to accelerate the process!

I wasn't brave enough to do that, but I was happy to try warmer water with my second shirt. This time, I placed my bucket in a bathtub and filled it with warm-to-hot water, about 110 degrees. I also filled the bathtub with hot water to try to maintain the warm temperature in the bucket. I used much, much more turquoise in the second batch: 2 tsp. of turquoise and only 1/4 tsp. of fuchsia. Otherwise, I followed the procedure exactly as I had for the first shirt. The result was a very pretty periwinkle, not quite the rich indigo I had aimed for, but again, a lovely color I'm thrilled with.

(I should note here that the amount of dye you use determines how light or dark the final result. It's suggested to use about 1 tablespoon of dye for a medium color or 2 tablespoons for a dark color, per pound of fabric. You scale up or down based on fabric weight. My t-shirts each weighed just 1/4 pound, so this suggests 1/4 tablespoon for medium or 1/2 tablespoon -- 1 1/2 teaspoons -- for dark. In fact I used more than this, yet got medium colors.)

For my final shirt, I wanted to crack open the jar of yellow dye, so I decided to go green. I had definitely learned from the first two rounds that color mixing is an imprecise science. I wanted to err on the side of more turquoise rather than too much yellow (I love lime green but it doesn't suit my complexion at all), so I mixed 2 tsp. turquoise with 1/2 tsp. yellow. This gave a very pretty emerald, pretty much exactly the hue I was aiming for! However, this shirt ended up with blotches in spots and I can only conclude that there were some invisible marks or stains on the t-shirt that only became evident when I dyed it. This is one of the dangers of working with old fabric! Incidentally, I was most worried about the perspiration marks on the shirts, but in all cases those were nearly completely hidden by the dye.

I would absolutely recommend this kit if you are willing to roll the dice a bit with respect to color. It's definitely a matter of guesswork, and I found that even testing the dye mix first on a small piece of paper towel or just observing the fabric while it was in the dye bath didn't really give a good indication of what the final result would look like. It's as much about how well the fabric takes the dye (and what technique you use, etc.) as it is about what proportions of colors you use. But it was great fun, and I still have enough dye for many more projects, especially if I replenish my turquoise supply. 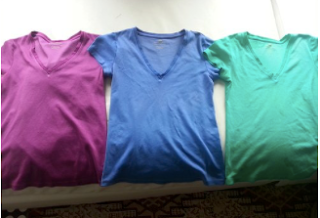 Mr. Green Jeans was on television. Black and white television. But since I am colorblind, it all worked out fine.

I think I’m losing weight because I’ve gone in 3 to four notches in my waist belt keeping my pants up, since buying the belt about five years ago.

There are no laces in the tennis shoes. Good luck with that.

I love elastane - the more the better.

At work we doing some painting, so I got the guys some of those white Tyvek overalls. They liked them so much they wore them home. Ahh, millennials, fascinating creatures.

Am I the only one still watching Project Runway?