Ampersand said: This experience is why I would like to to take an axe to anyone espousing global warming.

Ampersand is talking about an uncomfortable wait for a tow at a gas station on Christmas Eve during a blizzard.

The subject came up because the weather the northeast is having now.

And that reminds me of what Trump said just now. It's top of his Twitter account presently. Although what Trump said is not harsh, he manages to provoke the worst in his detractors. The worst. Again. And that is what makes his Twitter account so hilarious when it's not being mundane and anodyne and self-congratulating. There is an art to his provocations, a real art. He has their number, he knows their buttons and he stands there and push, push, push, push, pushes their buttons and the effect on them is pure entertainment to watch. Trump is like the Honey Badger video. He doesn't give a shit. He doesn't care. This is a first for us. A new thing in our lives. We've never had a president who makes us laugh so much.

I love dropping by my one-time favorite British satire site, now ruined by Trump-related dementia and dropping an American turd to their hapless parodies on American politics. "Trump lives in your head. Trump owns you. And you've nothing to say except 'Hitler' and 'orange.' He's not even your president and you flounce." 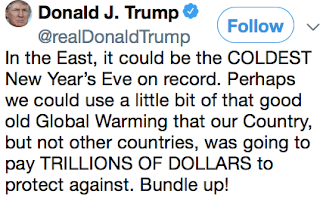 If you click on the Tweet and see the responses you see Trump is in his own league apart from his detractors. Every single hater imagining themselves so splendidly well informed with received wisdom and much better than their president sounds slow as a tree sloth by comparison. They simply have nothing to say except "Hitler" and "orange," nothing but stock responses, yet Trump lives in their heads all through the day and haunts their dreams through the night. And it is hilarious.
Posted by Chip Ahoy at 2:29 AM

Even before I ever thought about him winning I said he would be entertainment.

Right, and so much more.

The media loves to say how easy Trump is baited, but damn if he doesn't bait like a boss!