Idea lifted from Smitten Kitchen, you can read the whole article here. She is a charming writer. 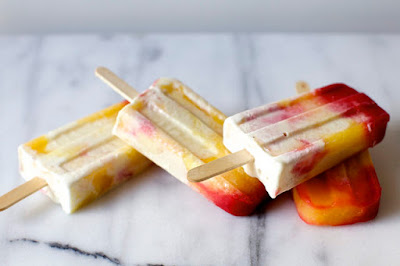 Oh man, I am so going to use my marble working surface for background. This woman really knows how to take pictures. I'm going to copy her all over the place, emulate her style choices.

Maybe I had just wait until I do these myself. Maybe Smitten Kitchen will sue me to take down this post. I don't know. I'm so enthralled with her effort I couldn't wait to show her off.

As for myself, I was I was not thinking of all these strange things, I was thinking peaches included in a salad but not particularly with tomatoes. My idea is crispy lettuce and most likely with homemade blu cheese dressing made with top blu cheese, not bottled, and not skimpy on the cheese either along with other things like watermelon, grapes, pecans, possibly even avocado, large chunks of a variety of different things on the plate. Possibly shrimp. The idea is derived from an iceberg wedge salad that I prepared for a party of twelve that was a hit with the diners. I kept the fruit away from the blu cheese so the diners would let them touch the dressing at the table. They control the dressing, not me. And I heard with my own ears twelve people go, "Wow, wow, wow." not just once but each person multiple times as first they had naked watermelon chunk, then watermelon chunk adulterated with blu cheese that they controlled then went, "Wow!" Then the same thing with avocado, and with grape, and with strawberries. Every diner learned new taste sensations causing each one to say "Wow!" more than once. I sat there and laughed. Then went, "Wow!" myself because it really is extraordinary. This was three years ago.

A week later a small note appeared in my mailbox. "Thank you for making the salads." The note included a Whole Foods gift card for $100.00. That was a first in my lifetime. I did it for fun. I told this story to the clerks at Whole Foods and they're all standing there listening with interest not once interrupting, wide-eyed and mouths agape. They're adorable. To a person they really are all foodie types.

And I thought of peaches with cheese but not mozzarella. I'm an antimozzarellaite right now because there are so many options for cheese that have actual flavor and mozzarella is fresh cheese that was milk ten minutes ago. It really doesn't add much to anything. Except stretchy goo when melted. So the caprese did not look interesting to me. I'd rather have milk.

And I did think of peaches with deli meat but not necessarily prosciutto. It's not my favorite. Not even my favorite ham. There are tons of other deli options. I'd like to fix a plate with peach cut up as an apple, flavorful cheese of any type, and sliced meat of any type. With roasted nuts and possibly jumbo raisins. Because I love raisins with everything. And the huge ones are best.

I also thought of peach waffles. Blueberry waffles as well. And I'll try that. But I'm a little bit afraid the fruit will fry in waffle iron where it touches and possibly stick and possibly be a little difficult to clean and I'm lazy about that.

So those were my ideas compared with their ideas. While I have my popsicle molds sitting right there waiting for room to open up in the freezer. Surely I can shove ripe Colorado peaches into those things.

I ate an entire watermelon by myself.  A few weeks ago.

With seeds inside it.

And even that wasn't enough watermelon to satisfy me for the season. So I bought another huge watermelon and it's sitting in there only half way consumed. I offered some to a guest who refused, and I'm all, "What?" Who in their right mind refuses watermelon? It's incomprehensible. I took off a large chunk and processed it to water, chilled it and drank it. It's wonderfully weird. The whole time thinking what I must do to assure great watermelon popsicles. Freezing things dampens their flavor, so the flavor, whatever is chosen is best extended. Or condensed. Maybe boiling awhile to condense and intensify watermelon flavor, maybe a touch of sugar and lime which is added to pretty much all flavors of paletas, Mexican style popsicles. I tried thinking of things that will not affect flavor too much like almond extract and vanilla extract, cinnamon and other spices, like allspice, nutmeg or curry. Basil is probably the best bet for fresh herb for both watermelon and peaches. Maybe a touch of salt.

Same thing with peaches. I'd add a small amount of sugar and lime, possibly basil. But not enough to overwhelm the peach flavor. I'd process them with skin for their color and process beyond chunks.

But I really don't know until I try it. And I cannot try watermelon or peach popsicles until I have space in the freezer.

These photos from Smitten Kitchen show the same mold as I use. It takes flat wooden sticks for old fashioned style popsicles. Then you have to deal with the stick. It must be centered after the mixture is partially frozen. And it must be discarded after the popsicle is consumed. And of course they must be purchased separately beforehand. While the plastic molds available designed for children (aren't they all?) have their own plastic inserts that self center as part of their drip protection and handles. 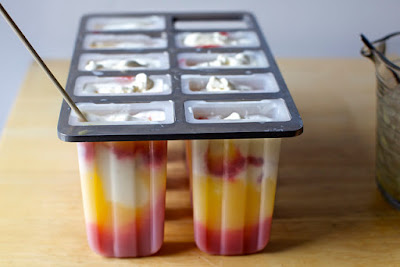 From Smitten Kitchen. Brenda uses vanilla ice cream and raspberry sauce along with peaches for peach melba popsicles. So three flavors in each one. And boy, do they ever look great.

She makes a simple sugar syrup 50/50 sugar and water because it freezes better than plain sugar. The peaches around here are so ripe right now there's enough water in them already. When they're cut they leak all over the cutting board and the plate. Incidentally, this will work for mango and orange, kiwi, and other fruit and berries as well.

More directions at the site if you need them.

I mentioned these popsicle ideas to a friend visiting yesterday and pointed to the molds sitting on the dining room table and the guy goes, "Oh my God! I make popsicles all the time. I make really super tart lime ones."

He's stuck on one flavor.

I've yet to repeat a flavor.

I mentioned that I just made some with commercial chocolate milk and they were wonderful. I didn't stop eating them until all ten were gone. Better than milk with Ovaltine because that tends to settle during freezing while commercial thick chocolate milk is homogenized so it freezes uniformly. He was genuinely surprised with the idea. "So you made fudgesicles!" And the page that I wrote for them zoomed in page views well past all the other entries around it to over 1200 views presently. Apparently it surprises other people too. And I thought it might be too ordinary to post. This paletas book from Amazon is loaded with similar ideas. As mentioned most all popsicles take lime juice. This book is where I learned that. Except for that one thing about lime juice, the whole time I was reading it I was also thinking, "Who needs this book? I already know you can make popsicles from anything, especially fresh fruit and berries."
Posted by Chip Ahoy at 2:43 AM

Allow me to thank Colorado for the best peaches in the US. Better than Georgia and slightly better than Idaho, IMHO. Eating a chin drippin' peach over the sink in the summer is pure joy. Men love eating over the sink. A friend of mine who is on his 3rd wife told me the times between wives he would eat ALL his meals over the sink. Never had to do dishes.

You have the best posts! Thank you.