"With hopes of dispensing the “perfect antidote” to the stock market crash of 1987, Italian-born sculptor Arturo Di Modica spent two years welding a 7,000 pound bronze bull statue designed to capture the resilience of the American people."


Under the cover of night and without a permit, he installed his massive “Charging Bull” directly before the New York Stock Exchange, a gift New Yorkers loved but New York City initially hated. Authorities removed it, but later reinstalled it under pressure at a small public park in the financial district.

In the 28 years since, it has become an institution.

Then last month, on International Women’s Day, a new statue of a symbolically brave “Fearless Girl” stole its spotlight — and, Di Modica says, fundamentally corrupted the artistic integrity of his “Charging Bull.” 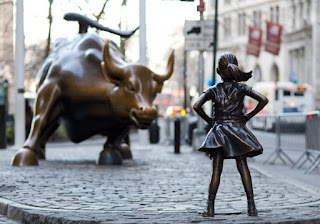 As “Fearless Girl” was heralded by many as a symbol for female empowerment, Di Modica doled out sharp criticism, casting the statue as not art, but a publicity stunt by the gender-oriented company that commissioned it.

On behalf of his bull, Di Modica won’t back down.

Given the history of how he installed his art, Di Modica should be more sympathetic.

Years ago I worked second shift, there was a secretary that had two ceramic duck figurines
One stood tall, head up, wings out ready for flight, pelvis thrust forward. The other had its grazing head down and it's rear feathers high in the air. I use to rearrange them, very artistically, in various positions, but alas my vision was never respected as they were always reset the next day.

Good for him. Why would women anywhere, but especially on Wall Street, want to be represented by a little girl engaged in anti-capitalist symbolic fantasy? Why would Wall Street want a statue symbolically opposing a symbolic bull market? Plus, the girl statue coopts and misinterprets the bull statue's symbolism which sends an unfortunate message about female creativity (it is not original but merely reactionary to make creativity) as well as female independence and hard work (drafting off make work and initiative). None of that is actually true but that's the message the girl statue sends me.

Standing in front of a bull that has that posture is bigly stupid. Should be called Idiot Girl Sculpture.

What is the little girl "resisting?" Prosperity? Can-do Capitalism? Optimism? A brighter future? What a farce.

She persists as a symbol of what Hillary would have done to Trump's bull market; stand in its way.