This post is about crocodile tears and not about Obama. But why bother? Apparently Obama held a press conference today and cried at the end of it. The photograph of Obamas red eyes and tear streaked face is making the rounds in satire form. Nobody I notice is having it. Except France. Twitchy brings the ridicule with their collection of joking tweets using the photograph to suggest things that really make Obama cry, and none of them are serious things, certainly not dead children as his supporters insist. That show of tears is for them.

France says it's rude of us to make fun of this raw heartfelt emotion.

Twitchy says the show of crocodile tears is unconvincing. They say to be fair there really are plenty of other things to make him cry and they continue listing the things while I leave off with them wondering what is this deal about crocodile tears anyway? Where does that even come from? Except that they're big and vicious. Why drag crocodiles into it? Why not whale tears if you want to go big with the metaphor? Must the metaphor creature be a sinister swamp thing crying big tears?

Crocodiles don't cry. They're poor for analogy or metaphor or crying related adage. Let's have this sorted about crocodile tears. I heard they have three eyelids, and that's all that I think I know.

In our continuing effort to set straight misapprehensions about animals that fill our language and warp our ideas about them adding distortion to our clear thinking, some research is useful into crocodile eyes. Skip if you like, no offense.

Amazing fact #2 To "cry crocodile tears" is a common expression which is used for depicting fake sadness. It has its origins in the myth according to which reptiles weep while eating humans. But, believe it or not, crocodiles really do wipe while feasting, but rather due to physiological reasons than remorse. Their eyes can froth and bubble during the feeding. Air pushed through the sinuses could mix with tears in the animal's lacrimal (tear) glands and the whole content could be emptied into the eye; resulting the "fake" remorse.

Oh. Fake sadness, not big sadness. Crocodiles fake crying, not cry greatly. This pretty much answers it. But I cannot stop until the three eyelid thing is resolved, because that's all I know and I want things to match, or else ditch the idea of three eyelids.

Amazing fact #10. If you turn on a lantern at night in waters populated by crocodiles, you will see pairs of shiny red dots. These are the crocodiles' eyes which have a layer called tapetum behind their retina, containing crystals that reflect light and make possible the night vision.

Inconclusive evidence crocodiles do this. (they haven't measured the actual sleep)

The Crocodilian Body - Crocodile Specialist Group word search [eye]
Crocodilians have a "minimum exposure" posture in water, in which only the eyes, the cranial platform (overlying the brain), ears and nostrils lie above the waters' surface. All the sensory apparatus is thus exposed while the most of the snout length, and the bulk of the body, is hidden. To potential prey, the exposed areas of the head give little indication of the real size of the predator's body.

Eyes specialized in a number of ways.

1) transparent eyelid that moves sideways across the eye when it submerges or attacks.

3) The eyeballs can be drawn into the eye sockets.

4) focused for aerial distance viewing, not much good underwater.

6) guanine crystals behind the retina, image intensifying device along with two additional types of receptors allow them to see better in low light.

8) spotlight reflects red (how they are hunted at night)

9) close together, binocular. The degree of overlap being small, they usually orient their whole head toward the target before attacking.

Good advice otherwise. Always look where you're going. Still, all that and nothing much about three nictitating eye membranes I heard about.

5) upper and lower eyelid and a nictitating membrane drawn over the eye from the corner while the lids are open protecting the eyeball surface underwater will still able to see. Sort of.
Ding. That's it. The three eyelid notion comes from a regular eyelid pair and the underwater safety goggles behind them when needed. Pretty cool thing to have. If you're going for human enhancement, that would be a thing to include on the wish list. 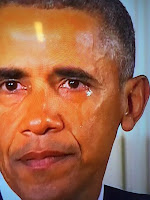 I said the post is about crocodile eyes, turns out that foam when crocodiles eat, and not about Obama talking about losing his protracted effort at confiscating guns as occurred other places. I get it, he's eating something and foaming.

After all that, I concede, crocodile tears really is a solid analogy.
Posted by Chip Ahoy at 4:58 PM

Tears of self-pity and rage.

Daddy left me. Mommy left me. Ooh am I gonna give it to all those WHO WON'T OBEY!!!

Off topic then, but
I don't believe Obama's tears were sincere today. He cries about the kids being killed as he tries to make them less safe. They were killed because we insist, INSIST as a matter of law that they be less protected than our money in banks, or our politicians anywhere, we forced those children into "gun free zones", and demanded that no adult be prepared to protect them. Unless he's feeling remorse about that, he's just selling a bad policy with what he knows works best with his followers - emotion.

I'm weeping right now thinking about how school buses have no seatbelts. Assumes baritone preacherman voice: Why? WHY, OH LORD? When will the suffering of the little children end? When will the meek and weepy finally inherit the earth? It makes me so MAD, like EVERY DAY! (Angrily extinguishes cigarette on altar, stomps out, wearily weeping. Oh, wait, that was a scene from The West Wing. But then, this whole administration is a scene from The West Wing.)

We need to get Bagoh on TV. That was good.

She would!
Lems should take over MSNBC. Ratings would skyrocket. We send Matthews off on assignment to sniff corrupt grannie panties. Leg tingle on a mission.

Hitler once called Heydrich The Man With The Iron Heart.

He could have takes lessons from Pissy, the Ultimate Sociopath.

I have a feeling this little performance will go into the textbooks.

That first thing led me to believe that crocodiles really do wipe the foam from their eyes when they eat, with their little lizard arms, and that would be strange to see.

And I related. One time my dad said, "Goddamnit! Every time I sit down for a meal my eyes start watering." And being an unsympathetic lot we said, "Well wipe them."

Quit bitching about every little discomfort.

And then after my faceplant and subsequent Bell's palsy my eyes too water whenever I eat anything. Anything.

Even a single Cheetos. And the only thing I can do is wipe them and stop complaining about every little discomfort because that was my earlier claim. It's like Karma has circled around to haunt me and kick me in the teeth for being so rude.

Or maybe it was the time Nana told me to stop making faces or else my face will freeze like that, that did it, and I told her to stop bossing me around scowling or her face will freeze like the one she's presenting me, and lo and behold, decades later my face really is frozen as punishment by God who is one hilarious fucker sometimes with an exceedingly cruel sense of humor.

And speaking of discomfort. Man. Just now my jaw jacked to tightly for no reason at all that I know, I cannot understand it, then tighter so hard that I tore off my shirt, and I'm all holy shit what is happening? and push things away and lay on the floor and it passed just like that and i'm all wtf was that? and right then that very moment Paul Ryan is on Hannity so I un-mute for a few seconds just in time to hear him say with firmness and assuredness while jabbing the tabletop as if his finger were a knife and he a capo the single worst thing possible to say,

You gave 'em everything they wanted and more, you asshole. I'm thinking don't even lift up and LOOK at me with your sanpaku eyes that tell me directly you're doomed. STOP LOOKING AT ME.

Now that I see them, I see them everywhere. The same doom-eyes as average jihadis. There was a British guy today, to replace Jihadi John, this guy was originally Hindi, tells us to submit to Islam, lifts up his eyes to speak directly and all that his eyes say is,"I am doomed."

And he is. Splat. If even that wet. More like whoomp. Gone.

And you know what that makes me? More comfortably distanced from doom than either Paul Ryan or an average jihadist, that's what.

Hillary needs to ask Obama "What difference now does it make?"

Where is the image of the Native American with one tear?