The man reads left to right.

Birds and animals are facing left so the inscription is read left to right. Read into the faces of people and animals. Sometimes they do face each other as over a doorway, the inscription or painting reads half one way and half the other way, but never together on the same line of writing or in the same phrase.

First, the writing considered sacred in front of the cartouches. It means we'll be looking at regular royal titular, standard formulaic writing: This is the stuff for beginner students because every pharaoh had them throughout all Egyptian history. And this is only a portion of the full blown formal deal.

Nisw, a rush plant with two shoots. Symbolizing lower Egypt referring to the delta. The man says "Netsu" But it is actually "nḫbt" sometimes "nesut" with two sprouts swt or śwt, Semi circle underneath represents the phoneme "t," in this instance, but it can also feminize words. Egyptologist agree the semi circle shape represents a small loaf of bread. There are two semicircles indicating plural, the combination  then will end with "y".

Bity, the bee. A queen bee, ruler of a respectably industrious people, symbolizing upper  Egypt, so, ruler of upper and lower Egypt. Standard formulaic writing seen often as part of royal titles. Expect more standard royal formula to follow, the name of a specific king. With two "t" sounds under the bee the plural "y" is added to the "t," so "bity." Were it English then the addition of apostrophe+s would produce "bits." Think, old bitty and you can not forget this word. Often a vulture replaces the rush plant for Lower Egypt and that makes for an awesome ligature of a vulture next to a queen bee with a "t" underneath each. Very symmetric and artistic. The two bittys.

This configuration indicates a king's throne name will follow, that is his or her praenomen. This is the name given when the king ascends to the throne. One of five names with their epithets that each king is known by. That is how you can tell when a king's name is scrubbed and another king's name substituted as so often happens with coffins and such. Tut's father's name was scrubbed all over the place, in the manner of say, the way a modern president name is abused in written works after office in an effort to rewrite history to better suit their unhappy successors.

Ta, horizontal stroke with dots underneath means land, two of the signs  means "two lands" this is reaffirming the sedge and the bee of lower and upper Egypt. In this inscription the "two" is reinforced superfluously with two marks under the two "ta" signs. Mostly likely an artistic decision to produce a rectangular ligature.

Now a royal name inside a cartouche. The king's throne name due to niswbity that preceded it.

The man skips the circle at the front because it is placed in front as honorific. Re, or Ra is pronounced at the end, however being a god it is written in front out of respect. This is usually but not always so, and it can lead to confusion because sometimes the name actually is pronounced first. But not this time.

Wsr Weser or wesert, a dog head on a staff, neck or nape, meaning "powerful,"

Maat A goddess with a feather on her head and an ankh on her knee. She symbolizes balance.

I, a sort of glottal stop, "ah", a sedge frond that looks like a feather. It is a very common sign that begins the name "Amun."

Mn, a senet game board.

N, zigzag water, this laborious to draw and difficult to carve sign merely reinforces the "n" sound in "mn" of Amun. A very inefficient letter. Artistically it fills horizontal space for a ligature of stacked horizontal signs. This configuration of vertical frond + horizontal senet board + horizontal water is common for the name Amun. You can spot this arrangement a mile away because Amun was such an important deity.

So, with a bit of honorific convolution and adjectival switcheroo, Wsr-maat-re, Mry-Imn, better known as "Usermaatre-Meryamun", powerful of Maat and Re, beloved of Amun.

Sa, a standing goose. It means "son" This sign is used all over the place, not only for royal titles. Another common sign, because "son" is an important word.

Re, a sun disc, it means the sun god "Re, or Ra"  The shape of the goose with it strong diagonal element leaves an open space for the sun sign to be drawn or etched. This ligature is common, another combination that is spotted far off, the combination signifies the king's nomen will follow, the name of the king given him or her at birth, nearly identical to family name that begins "son of Re"

An additional epithet to the "son of re" designation:

Neb, woven basket without handles, we already saw this in "lord of two lands" now it will be "lord of something else."  But what? What else could he possibly be lord of?

Ḫcỉ  , hehi, the sun rising behind a hill, it means "appearance," three of the signs, or the sign with three marks under it means plural, so "appearances." Lord of appearances. The man translates "air" "all over" but that is incorrect. The sun "appears," suddenly shows reliably every morning over a hill in full bright blazing glory. Lord of appearances.

Then onto the son of Re name within the cartouche.

Re, the figure of a god this time, not just a solar disc, with the sun disk on his head and an ankh on his knees. Otherwise depicted simply as a solar disc but here the whole god is depicted.

S, a folded piece of linen. Sometimes the letter is superfluous in reinforcing a sound already present, but this time it is not. Sometimes Re is placed in the front as honorific while pronounced elsewhere, but this time it is not. See? It's tricky. People would have known by living in the time of Ramses III that this time the name is spelled out straightforwardly, but latecomers such as ourselves must constantly be on the lookout. Ra-mes-es. But which Ramses? There were more than one Ramses. Ramses Gordon for instance, the megalomanic of a much later age.

T, a different "t" than the bread "t," this depicts a pestle. It avoids the signification of bread-t as feminizing. The bread "t" is very common sign, as common as bread itself, the pulverizing pestle-t is less common. So, Ramseset. Gardiner's signs U33.

The translator leaves off the last two signs, as they do. I do not understand this. It is part of the common epithet, as common as "king of two lands" why they always ignore it is beyond me.

Ḥḳ3   Crook, cognitive hooker, shepherd of people, part of the royal paraphernalia; crook and flail, gather one's subjects and whip them into shape, metaphorically speaking. Gardiner's S37; crowns, dress, staves, etc. This too is a common sign. It is another sign meaning "ruler"

Iwnw, Iunu, sometimes Annu, an Egyptian style column with a grove and a tenon, a peg on the top to accept a crossbeam. The sign is drawn like an old fashioned butter churner. It is found in Gardiner's category for Buildings and parts of buildings, etc., O28, different from the djed column that represents a backbone type column.

The sign represents the city of Heliopolis, located at the eastern point of the delta where the river starts to fan out. It is yet another way to say, Lower Egypt, the delta, usually but not always in conjunction with another sign representing Upper Egypt, southern Egypt, the flatter area below (north of) the Nile cataracts, where the river becomes quite messy farther south, thinning out, becoming spread out and shallow in areas, difficult to navigate with huge boulders all over the place and bordering the kingdom of Kush, now Sudan.

Known as Iunu, sometimes nu, sometimes "on", "the place of pillars." The biblical Heliopolis was the capital of the province of Goshen, the place of bread, in Hebrew, the city of the sun "ir hašemeš" is made into a pun, "ir haheres " city of destruction. The Hebrew name "Beth-shemesh" for Heliopolis means "house of the sun." 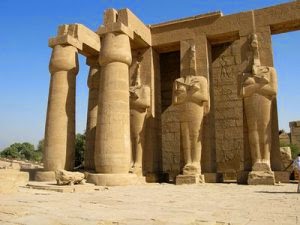 Incidentally, The "Amun-huka-Iunu" combination containing the iwnw pillar sign is familiar by is use in King Tutankhamun's cartouche but there the name also contains the sign representing upper Egypt, Šmew, shemew, another sign for the sedge plant. So Tut's empire was larger it seems. These signs for "ruler of upper and lower Egypt are often simply ignored. Tutankhamun's full name within the familiar cartouche is actually "Tut-Ankh-Amun-Huka-Iunu-Shemew. Why it is left out so often as this translator does with Ramses III can be explained only as a matter of neglect. And you see by the ligatures that the pronunciation "Too-Tank-Amun" is flatly wrong. It misses entirely the meanings of the syllables. "Tut" means "image," so, Living image of Amun, Ruler of Iunu (the delta, lower Egypt) and Upper Egypt.  Upper meaning, not necessarily mountains, but rather the bulk of the flatlands separate form the delta, the southern long part of the country in the shape of a snake, the shape of the river itself.

But speaking of Kush, it appears from Drudge that pictures of Kate Upton's cooter have been posted without permission upon the internets.

This is just terrible. I'll have look into it further.

All I know about hieroglyphics, I learned from Rachel Weisz.

There must have been a glyph with a dead rat nestled against a single bird feather and two well-formed poops from the cat god.

While shown as "Green" on the map, large parts of the delta are desert. Napoleons' army almost died of thirst when marching from Alexandria to Cairo.