“The worst part of it is, I’m burning stuff not for heat, but for aesthetics,” said Ryan Matzner, 29, whose West Village apartment has enormous stacks of firewood on either side of a white brick fireplace. “It’s like, ‘Wait, this is actually pretty hypocritical.’ It’s very similar to the idea of a cork in a wine bottle instead of a screw top.” He added that it was an “aesthetic kind of thing that’s purely for the sake of tradition.” 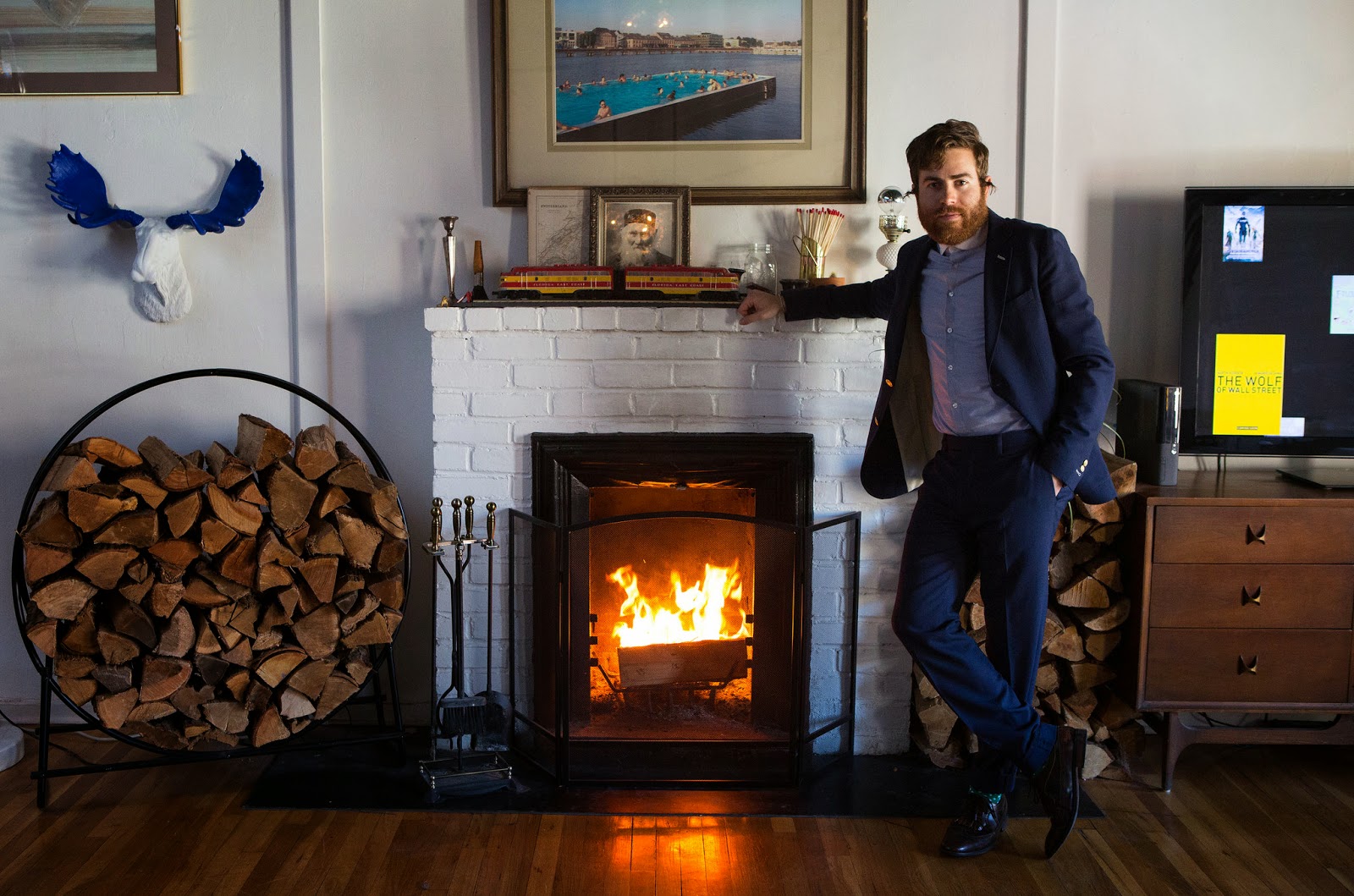 These reflections have not stopped Mr. Matzner from building fires when he throws parties, when he wants to make s’mores or when he wants to impress a lady. But he often uses the clean-burning Duraflame logs, not, he admits, so much out of eco-guilt, but because they burn more quickly and less smokily. (read more)
Posted by Lem at 11:00 AM

Meade...by the way...in the 60's to early 70's everybody who was anybody was fuckin' everybody...very unlike you who is virtuous beyond criticism ...at least for one wife at a time. No other "interludes" right?

I don't remember the original topic.

Yes, old man Meade, please tell us what music people should listen to.

Because you are an uneducated day laborer leeching off a crusty old twunt's money.

But then the topic turned into expressions of classism, sexism, deathism, and gay-hate by self-styled "progressives", "libertarians", and "conservatives".

Is that a word you learned in your extensive post graduate educational years? Or were you mooching off a woman with a higher income and vocabulary in your first marriage as well?

Like a moth to a flame, Larry the Leech keeps coming back to a website where there is not the censorship exercised by his box wine swilling mealticket.

Shhhhh, don't let Ann find out that her stray dog got out of the yard.

Damn, are you drunk this early in the day? Or just hung over from tying one on last night?

Either way, party one, drunky! Your "wife" likes her men docile and limp-wristed. Pour ol' saggy another glass, too. She needs it more than you do.

I think Meade is jealous at the amount of comments Lem's site is generating, hence the Crack bait reparations post.

It is pretty clear that he comes over here to stir things up when it is particularly moribund over there.

I think he tries to incite those of us who still post over there like chickie or DBQ by personal attacks.

It is a sad little act.

I think he tries to incite those of us who still post over there like chickie or DBQ by personal attacks.

I get that, Troop. Meade is currently sitting on two pointed comments I made (about Crack and Meade's use of Amazon donations for Crack). I know that one went through because I see it in my gmail feed.

So I've decided...no more nice comment contributions over there for a while.

You can quit any time you like, right CL?

Hey if you enjoy posting at TOP then you should go ahead and enjoy. I never would criticize that. I realize the you know the game that this grafter is playing.

When the numbers dip over there they break out Bubbles and he puts on his tutu and roller skates and puts on a show.

But we have all seen that show before.

When I worked on a fruit farm in Paonia, Colorado in 1973 I learned how to graft apple trees.

"So I've decided...no more nice comment contributions over there for a while."

Aren't those words what they call weasel words?

Not so tough when you can't delete the comments calling you out for the mooching little shit you are, eh Meade?

Fuck you and the sloot who pays your bills.

My motorcycle is parked in the garage and I'm in my cabin, enjoying a nice oak/maple fire in the fireplace. I thought I'd catch up on blog reading and ran across this topic.

It interests me because of my background as a builder of hundreds of highly energy efficient custom homes, from 1,000 to more than 10,000 square feet. I was the first Energy Star builder and the first Green Built builder in my part of Wisconsin. Framing, sealing, insulation and energy conservation techniques I used were ridiculed as overkill by my competitors. Then, five years later, they were calling me and asking me how I did those things because they wanted to do the same.

Back to the present. The NYT article about fireplaces and a few of the comments here are utter bullshit. That's my professional opinion.

No one in the NYT article had a clue about that simple fact. Some of the environmental nannies here are equally clueless.

Here's a link that may be of help.

Gas fireplaces are designed to burn air and fuel at a very specific ratio that minimizes emissions. Domestic stoves and water heaters are far dirtier than even the most inexpensive gas fireplace, you one never reads of self-absorbed hipsters turning off their water heaters and forsaking their stoves.

It's my observation that the most nannyish of the envrionannies are people who live in large old homes with too much glass, too little insulation, and no real conservation features except for the occasional new front door. And those energy pig homes are far, far for the one or two people who live in them.

Want to save the environment? Start at home. Disassemble that big home, reclaim what can be reused and build in it's place a lovely 1,200 square foot off-the-grid, highly efficient home sized right for its occupants. Until that has been done, pipe down about what others should do.

"Disassemble that big home, reclaim what can be reused and build in it's place a lovely 1,200 square foot off-the-grid, highly efficient home sized right for its occupants."

Hey, quit telling Dust Bunny Queen what to do. Don't you know she'll put a fatwah on your head?

Who put that fat wad on your "wife's" head, Needy? That bitch is looking worse and worse by the day. I would suggest that you go trim her bush or something, but clearly she is at work and you are using her computer. Just you wait, little man, until she gets home - you are going to be in a heap of trouble, a big steaming heap.

You do know that most new wood burning fireplaces are equipped with catalyst devices similar to the ones in your car's exhaust system, right?

I would be very interested in what the latest fireplace/catalytic systems are like, how they work, and so forth. My last experience with a $2500 wood stove with converter, all pretty with soap stone yada yada, was that it nearly burned my ex-wife's house down several times. We're still sort of friendly...last instance was a jet exhaust like column of flame shooting in to the night sky and the exhaust pipe turning cherry red down to within 10 inches of the stove. Took two "Chimflex" sticks to shut it down. That stove with converter sent smoke up the chimney that was way to low temperature and deposited huge amounts of creosote on the piping...vigorous chimney cleaning about every 3 weeks minimum or you had the Boeing 747 engine lighting off.

After that last episode cooled down, while visiting with our daughter, I tore every bit of the "converter" our of that POS. It was better called the "clog-o-matic" device...it would clog up in one month or less. It was better, after the removal, but the venting curves and elbows for the old converter were still and had poor air flow in my opinion....convinced her to buy a iron stove from a local hardware that had been in stock a while...e.g., no converter. Now chimney is cleaned once a year like normal folks and there have been no chimney fires.

I know I am not expert in this field...I just know what was dangerous in those days...over 10 years ago now. She lives in the north woods, in the middle of a National Forest...and loves her wood stove heat even though she has a regular furnace and A/C which gets used minimally. If you visit "Nina" in winter...be prepared for 85+ degree heat or what she calls "toasty warm".

Me, in the city I burn a lot of firewood too, using maple or oak. A few years ago I had new flue piping install with a chimney top damper and the airflow up the chimney finally matched the fireplace large opening (no longer needed to install a baffle on the opening under the mantle) and the efficiency improved...way less than half the soot and smoke out of the chimney top versus before.

So...a link or two would be helpful to me, and any of us whole have similar concerns. I'm happy to imporve my energy profile so long as it is actually efficient and not a hazard. If it is a long answer, you can spare everyone else (unlike me:) and email me.

Now as for the topic of this thread.

It's not about healing or not, it is recalling the hypocrisy and mendacious behavior. I include Meade's periodic visits here, rarely on topic and he rarely reads what a commenter has said before he fires of a snarky bit.

You recall I am a "preening poser" for my stances on horses, right. Spent my life with them, nursed several to health when ill or injured, and have clearly said, repeatedly in that thread, that I object to the youth of race horses and their early starts. Never-the-less Meade implied caring and staying involved was preening and posing...e.g., he never read a word I said. He doesn't like me perhaps and if so the feeling is mutual plus ten.

I recall his antics on this site early on and how he attacked people personally and vindictively. We'd been effectively shut out of Althouse and the time, and some of us choose not to go back. The wonder is why does Meade come here to comment? I'd suggest any "healing" shortfall is in his, and his wife's, court, not ours. I simply no longer care what Ann or Meade say on any topic. I still have my emails thanking me and saying how I was appreciated....but now I file those under the folder "Con Jobs."

Sorry you feel that way, Aridog.

"He doesn't like me perhaps and if so the feeling is mutual plus ten."

Did you convince Ann to give any of the money she is paying for your room and board to that moral, hardworking, clean, articulate, Crack Emcee yet, Leech?

As far as personal attacks go if you smelt it you dealt it!

Cute, Meade...you have a email feed for any thread you so much as pass flatulence toward...I deleted that post here because it was posted here in error. It was reposted on the "Althouse at some point..." thread, which strangely you have not dropped in on.

First, as usual you do not actually read the comments of others...a quick scan for a tidbit maybe is it. That's a pretty good reason to ignore you I'd say, so I should stop right here. So I will.