Mike Hudack: It's hard to tell who's to blame.

"Mike Hudack works at Facebook. He's apparently pretty important there. His title is "director of product management." And he has had it with the news media, especially online outlets with their salacious gossip and click-baity listicles. So he vented his frustrations today on his Facebook page."


Evening newscasts are jokes, and copycat television newsmagazines have turned into tabloids -- "OK" rather than Time. 60 Minutes lives on, suffering only the occasional scandal. More young Americans get their news from The Daily Show than from Brokaw's replacement. Can you even name Brokaw's replacement? I don't think I can.

Meet the Press has become a joke since David Gregory took over. We'll probably never get another Tim Russert. And of course Fox News and msnbc care more about telling their viewers what they want to hear than informing the national conversation in any meaningful way. (read the whole thing)

The Atlantic's Alexis Madrigal had a response. 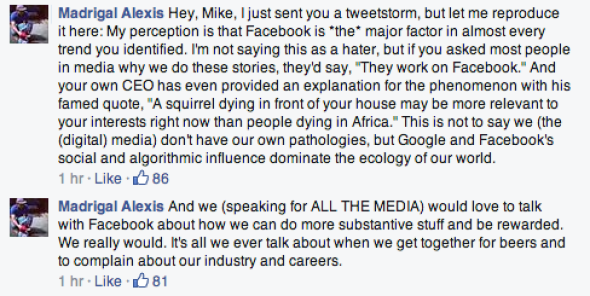 Labels: Fake news is closer to the truth

"It's hard to tell who's to blame." Nope. It's really easy today. Everyone has access at their fingertips to whatever they want, and just like our politics, we choose poorly. If we suck, it's because we suck. Do you suck?

I think he's right about that squirrel thing.

The British tabloids have the balls to tell the awful truth about the coup that has taken place in the colonies and the figurehead the coup has installed. Go to them, Mike.

Sounds like Zuckerberg wants to start a news site.

The news media is a huge joke. Useless and full of preening idiots who are so obviously biased that it isn't worth our time to turn them on. Repetitious and boring. They all spout the same talking points over and over and over. And they NEVER actually do any investigative reporting or give the full picture of an event. I think that the ridiculous Katrina coverage was the last straw for me. Unbelievable idiocy in reporting.

Occasionally, we might check out our local news station to see if there is anything we should know about, mostly weather or keep up on a special event. Rodeo! The paper decided to cancel home delivery and there is not one place within 40 miles to buy a local paper. They will mail it to you, but who cares. By the time the mail gets HERE, after 12pm, it is old news.

Our "news" comes from the internet. Surfing the various sites that provide links to stories that link to other stories. I feel more fully informed of the current issues than I ever would be if we digested the pablum that is presented on the Networks.

I think Cavuto is pretty good DBQ. You might like his show. But in general I agree with you. Why watch a news show when, for example, they all are global warning zealots or huge Daily Show fans or apologists for Obama or apologists for inept Repubs?

Fox News skews right, but they are the lone voice that skews right, so, "fair and balanced" is actually accurate.
MSNBC is so far off the charts to the radical left and in the tank with the administration, that they are a joke.

Most media are, again, as we all know, lazy and incurious, dutifully reporting the agenda and a set narrative.

Pravda would be proud.

I stopped paying attention to newspapers around the time of the invasion of Afghanistan. Our local newspaper ran daily headlines that were basically regurgitations of the Taliban talking points. I think they got them from the AP or NYT news feeds. Worthless.
I stopped listening to radio news around the same time. Same reason.
I stopped watching television news much earlier - sometime in the 1980's when they went all tabloidy with the news.
From what I can tell in the glimpses I occasionally have of them, none of these news outlets have improved, but only gone downhill.

And another thing--- I am suspecting that our politicians and leaders are so messed up because they still rely on these mainstream news outlets to try to gauge the mood of the public. If all you listen to is NPR and you believe NPR is telling the truth, you would think that Obamacare was popular, that there is no voting fraud, and that no one believes in the Constitutional foundation of our country.