"The Californian desert has become a popular place to build solar energy plants because of the abundant space and, of course, the sun. However, the region also serves as one of the four major north-to-south trajectories for migratory birds: the Pacific Flyway. So while it seems like an ideal locale, birds who fly over these structures face some new and unusual hazards."


When it comes to death by solar farm, birds typically die in one of two ways. In the first, the glimmering sheer of solar panels might trick birds into thinking they are actually part of a body of water. And so the birds, especially waterfowl in this scenario, dive towards the panels, looking for moisture and food, only to find themselves, bones broken, dying in the middle of the arid California sand. 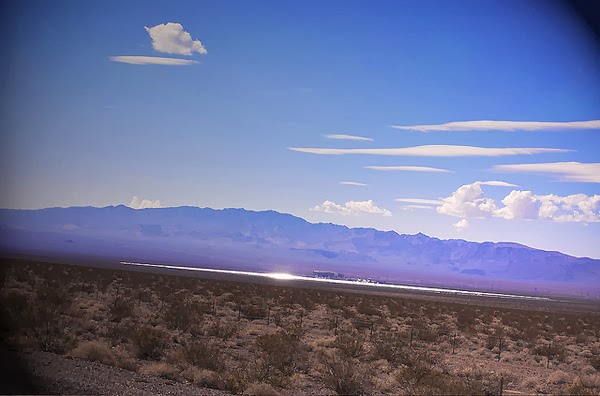 Blunt force trauma aside, others feel the wrath of the harnessed sunlight. At the right (or really, wrong) angle, the potent radiation bouncing off solar mirror’s are enough to burn a bird’s fragile wings, abruptly sending the creature downward towards the ground and impending death. They’re like tragic avian Icaruses, except without an easily digestible moral lesson behind their fatal crashes.

I read this in a science fiction when I was a little kid.

Except they were fields of flowers and not solar panels. The flowers had reflective petals and they oriented toward movement so reflected their light onto anything that moved. All of them do that at once, so anything flying over is suddenly looked at by all the flowers below that sense its presence and zap it with reflected solar rays thus killing it effectively where it drops from the air dead. decomposes right there and fertilizes the plants. Flowers grow most densely not so far from the edges. And now it's happening in real life!!1!1111!!

At some point the birds are going to get hip to what the enviro-pagans are doing to them and we'll have a world wide case of life imitating Hitchcock.

Or at the very least a lot of pissed off birds shitting on people's heads.

So leftist ideology convulses around itself again. There is nothing more warped in human existence than leftism.

As the birds fall to the ground dying --

Chip, I think that was Ring World by Niven. Great book.

The lefties / enviros seem to think they are immune from the Law of Unintended Consequences.

Huh, I hadn't even considered that possibility.

That's really a shame, because southern California is one of the few places in America where widespread use of solar power makes economic sense.