Inspired by Chip Ahoy's recipe for turkey broth, I took a look around the kitchen this morning to see how leftovers could be repurposed into something non-leftover-y and still tasty and appealing.
What to do with the remaining calorie-laden pumpkin pie?  That is always a pressing morning-after-Thanksgiving question.  You can't just ignore it, but you are not feeling good (probably) about eating pie for breakfast, and you don't want to throw it away because of the starving children in India your parents told you about when you didn't clean your plate back when.﻿
Well my health conscious friends, you can re-purpose that left over pie into a nutritious smoothie.﻿ 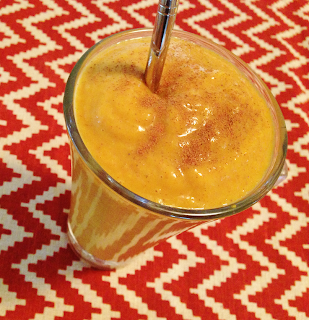 Because smoothies are by definition and common belief the healthiest thing you can ingest before, during and after exercise.  Smoothies are so healthy that are sold in health food stores.  If that isn't proof, I don't know what is.


Blend until it looks like a smoothie.  Or a smoovie if you never studied phonics.  Drink to your health!

Pro tip:  This recipe is easily adaptable to apple pie and other fruit pies.  It won't be quite as successful with pecan pie, kidney pie, shepard's pie, cheesecake and that awful fake pie thing made with Cool Whip and crushed Oreos.
Posted by Michael Haz at 9:18 AM

I NEVER feel bad about eating pie for breakfast, or for that matter pizza or anything else that is left over that I feel like eating.

protein/eggs
grains/crust
milk/whip cream topping and milk in the pumpkin custard
starchy vegetable/pumpkin
Ok....so sugar and lard probably aren't all that great for a healthy diet but big deal. Cut down somewhere else.

Right? So eat that pie. Life is short :-) Have a hot steaming cup of coffee. Coffee is good for you.

So I don't have to eat this giant bowl of steamed kale as repentance? I could make a kale smoovie.

A kale smoovie? Ugh! I'd stay with the high-fiber pumpkin pie smoothie with the healthy detoxifying effect of two shots of Jameson.

I think you're right.

I like the fake pie thing with the cool whip and oreos.