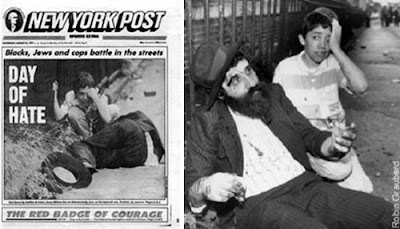 Here is an interesting article about how former criminals are advising the new mayor Bill de Blasio.

Here is an except:


Forget Ray Kelly, Bill de Blasio is getting his policing advice from the real experts — hardened criminals.
A group of 50 ex-cons, junkies and chronic vagrants gathered at a Manhattan “Think Tank” Thursday to describe what they thought the NYPD should be doing to make their lives easier.
The felonious forum outlined a clear “get-soft-on-crime” vision.
“I like the idea of ending stop and frisk. That was the first thing that was totally there for me,” opined Mikell Green-Grand, a 49-year-old former jailbird who has convictions for grand larceny and identity theft.
Arthur Castillo, 38 — who has been convicted for possessing stolen property and assault — said he would be much obliged if the cops just left him alone to do his thing.
“Cops won’t leave us alone!” he said. “Newly released prisoners are watched by the police and a lot of us don’t feel we have an opportunity to readapt to normal life because we are treated as criminals even though we are free.”
The event, which was held in Morningside Heights, was hosted by an advisory group called Talking Transitions, run by liberal billionaire investment magnate George Soros.
The goal was to offer de Blasio tips on “policing, corrections, parole policies and more.”

You can't make this shit up.

Posted by chickelit at 3:38 PM

Everything that is old becomes new again.

On the plus side, we can look forward to the 25 cent peep shows returning to 42nd Street, and the return of meaningful gay marital encounters on the West Side piers!

Valentine Smith said...
This comment has been removed by a blog administrator.
November 22, 2013 at 4:02 PM

I was pondering... Just the other day... Why radical leftist hearts bleed for criminals. Sort of a timeless theme.

Will teh city be safe enough for lib gals in high heals? Stay tuned.

Can't ya just feel the love from Soros?

If you liked Dinkins, you will love De Blasio.

According to the smart people in power, if De Blasio fails (which he will, the argument is more about how spectacularly) it will be because we, detractors, have been rooting against him.

That's what they are saying about ObamaCare.

Lem, the same thing happened when Dinkins was mayor. If you opposed him you were racist.

Yet another reason on a very long list as to why I avoid Cities and urban areas as much as I can. Besides the fact that I don't like crowds, the urban areas are just crime ridden and full of maniacal people.

Sure bad things can happen in rural areas. We can be robbed or other things. The difference is that people look out for each other, everyone knows each other, scum like these stand out...really stand out... pretty much everyone is armed.....and there are many places to hide the bodies. Just sayin'

You think De Blowhard's bad wait'll you see the City Council. Saw a debate on NY1 for the presidency. Biggest group of ethnic morons you'll ever see.

If bullshit could fly that stage would have been an international airport.

A little trip down memory lane...

Hang up your Hang ups

Give it 10 years and all the Democrat-run cities will look like Hiroshima.

Why would a mayor want his city to have more crime? I don't get what De Blasio is doing. Can it be explained?

The best rebuttal to this is to question why he didn't bring in and ask victims of crimes and ask what could be improved for them. When I worked for a prosecutors office as an investigator I was the only person to help them get through the trial, and then they were on their own.

And more, why would a majority of those casting votes want a mayor who will go easy on criminals?

Haz, It is a glimpse into the soul of a liberal. That's the explanation.

Because criminals are his base, Haz.

I don't get what De Blasio is doing. Can it be explained?

Racism is everything. Everything is racism.

If only racism could be fixed, Utopia would be manifest.

Same reasoning applies to the election of Obama.

April asks the key question, why do liberals have more sympathy for perpetrators. I get the bad upbringing angle, but there are priorities.

Criminals and foolish white kids fresh out of college full of the racism indoctrination.

The fact of the matter is we are at a tipping point where the people who remember what it was like when Dinkins was Mayor are all either dead or not voting anymore. They think that the reduced crime is due to something other than police policies like stop and frisk.

Those who forget history are doomed to repeat it.

They will be the victims of the liaise faire attitude toward crime of the Deblasio administration. Bill wants to put into effect his cherished theories. Tax the rich until they squeal. Stop police brutality. Spend countless millions down the rathole of public education as administrated by the teachers union.

They are in for a rude awakening.

They are in for a rude awakening.

A lot of graft to be distributed before the day of reckoning.

Crime rates are down dramatically everywhere over the last decade or more, so I don't think it can be attributed primarily to police policy that's characteristic of just some cities. It must be something very powerful that is across the board of our society. Although crime is much more visible today in the media, statistically so far down from where it was in the late 60s - 90s and so widespread a drop that it's truly an enigma.

I think most likely it's a synergistic effect of multiple causes that just happened to occurr in rapid succession and now effect it simultaneously:

@bagoh20: Crime is down because Obama was elected and then reelected.
Now get with the pogram.

Well, you certainly are correct in that many things that used be crimes are now "just politics".

Exactly: if you take some so-called crimes off the books -- presto!

Working against all that success are the sores. If they don't go away, recidivism is sure to follow.

Freakonomics proved that crime goes in spurts and declines the same way. It is not due to policing or economics, it's attributed to birth rates. Crime is committed by young men. When the demographics, based on birth rates has a lower number of 16-24 year old males, crime goes down. When that demographic goes up, so does crime.

I think it is mostly the increased alternatives available today of education, and indoor entertainment that keeps them off the streets a few years longer than before, allowing them time to mature some. Nothing kills crime like aging.

Those assholes that tried to railroad a whole group of young men who came to them and paid them for an education need fired, and put in stocks, in the lacrosse locker room.

In NYC crime has been going down for the past twenty years. If it starts going up under DeBlasio, his tenure will be brief. Whatever the causes and cures of crime, DeBlasio will look weak and ineffectual if crime goes up on his watch........His big anticrime program involves a pre K education program. This will dramatically reduce crime among pre K school teachers and administrators. It's theoretically possible that the program may also be of use to the children.......you know what works even better than Head Start, stringent gun regulations, and pre K programs? Two parent households. I suggest that they dump all those programs and give every inner city married couple who can keep their marriage intact and get their kid through high school without a criminal record, then give that couple a million dollars. It would be far cheaper than all those other programs.

I think it's more accurate to say "Freakonomics claimed". I expected to enjoy that book, because I expected them to explain how they excluded other possibilities. Instead they essentially wrote "trust us, we excluded those possibilities".

Have you ever read the studies backing the various claims by activists or popsci articles? Invariably when you get to the actual study or survey question you realize they made astonishing leaps in logic which allow for many other possibilities. You have to show your work.

And CCW permits. (You now the story behind the Sullivan Law? Go look it up. It's a trip.)

Boston has been run by demos foreva and are economy is booming!

Titus...you need an email in your profile so I can contact you.