It's mind a blowing $33 billion, according to this article in the Washington Post.

The City of Chicago has $7 billion of revenue each year, from which is it supposed to pay all city operating costs, service debt obligations, retire debt, and fund several employee pension plans.  But it can't do that, or more accurately won't do it because politicians lack the political courage necessary to make changes.  And because the amount owed is so staggering relative to Chicago's tax revenues.

The WaPo article lists $19.5 billion of unfunded pension liabilities and $13.9 billion of outstanding general obligation bond liability, a total of $33 billion.  All of these obligations are to be paid from revenues collected via the property tax and local sales taxes.


Decades of city government spending means that in 2039, Chicago will still be paying off bonds from 1993. Some of those repayments, the Tribune said, will be for debts on public housing developments that were torn down more than a decade ago. Generous pension contracts signed without allocating future money means the police union’s pension fund has just 31 percent of what it will need to pay out future liabilities; the firefighting union has just 25 percent of the money it needs.

The WaPo article is accurate as far as it goes, but it doesn't go far enough.  It doesn't look at ALL pension obligations that the Chicago must meet.  Taken from a publication of the Civic Federation: 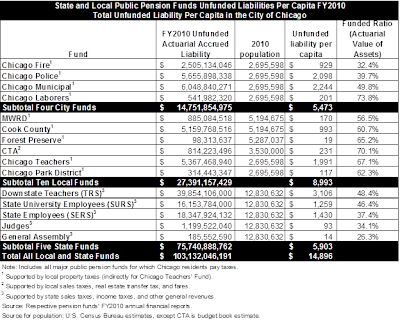 Chicago has unfunded pension liabilities of $14.8 billion plus $27.4 billion, a total of $42.2 billion.  Add the general obligation bond liability of $13.9 billion and the total becomes a whopping $56.1 billion that Chicago owes.

And that doesn't count Chicago's portion of the $75 billion of unfunded state-wide pension liabilities.

The mayor of Chicago has five difficult choices from which he can choose:


1. Protect Chicago from pension liabilities by filing for bankruptcy.

2.  Seek payment of its outstanding obligations in part or fully by the federal government.  Obama can solve this with a stroke of his auto-pen.  And every other major city will expect the same gift.

3.  Restructure Chicago's labor union contracts to require that union employees pay a larger part of their own retirement funding.  Rahm doesn't have enough Kevlar to do this.  And his aldermen would not stand with him.

4. Impose and astronomical increase in property taxes and watch businesses and residents flee to other municipalities while tax delinquencies skyrocket.

5. Do nothing and let the problem fester for the next mayor to resolve, or more likely, kick further down the road.  Seek higher political office and let some other schlub solve the problem next term.

Welcome to the decline of a once-great American city.

Why not just triple taxes? After one year, I'll guess that the citizens of Chicago would accept any answer to this problem.

So instead of addressing the looming fiscal catastrophe of public pensions and seniors' medical expenses we created a new entitlement with Obamacare.

Of course we did. Genius.

All that toddlin' sure adds up.

They held major protests. They threatened him. And the Chicago PD told him that it's officers would not protect him if he cut the City's contribution to pension plans.

Well obviously raising taxes is the solution, so says Progressives everywhere. Also, ban citizens from having firearms, so you have a need for a massive and ineffective police force to stop violent crime.

Boeing can move their factory from Seattle and their headquarters from Chicago, and Socialist can tells us again that Ayn Rand was psychotic.

Chicago can support all that debt because it is the City of the Broad Shoulders.

I know you have a soft spot for Chicago, Michael. Not so I. As a native Wisconsinite, I've always just seen it a a big sucking eddy of despair.

The Science & Industry museum is cool though.

Can you project forward and imagine the shit flying off the fan in say a decade or so when so many of the liberal chickens come home to roost all at once? There will be great gnashing of teeth, and I expect a real divisive situation approaching civil war proportions as places like Texas, containing a high percentage of makers, resists the onslaught from places like Chicago and California as they attempt to suck them dry to avoid total collapse. Our energy situation is the only thing looking strong right now, and liberal states will soon reverse all their anti-energy policies to save themselves. Environmentalists will be thrown under the bus to protect pensions, and AGW proponents will end up with a situation of influence similar to the flat earthers.

Heard you got an infection
From a guitar player of great renown
Wait 'till the shit hits the fan
You couldn't turn him down.

Redford was in Chicago this past summer filming a doc as an homage to Chicago and the teeny tiny mayor.


Pollo, I have lost my soft spot for Chicago. My wife and I are there several times monthly for theater, shopping, etc., but with each visit I have become less enthralled.

There was a time, maybe 8 years ago when we considered living in a small condo downtown after retirement so we could enjoy the city. The crush of ever-increasing taxes, violent crime even in safe neighborhoods, and the constant corruption at all levels ended that notion.

My reaction now is "how can a city with so much to offer be so fucked up?"

Liberal governance, the death knell for Chicago and other cities, large and small.

And Chicago is an HO scale of what liberal governance is doing to America.

It only seems possible that in the end these unfunded liabilities are gonna go down. Lots of fighting and screaming and a huge spike in poster board sales, but they will eventually fall. The majority are not getting these pensions, and when the alternative is to take their retirement money to give to people making more than them for less work, the parasites will be dusted off.

bagoh20 said...
Lots of fighting and screaming and a huge spike in poster board sales, but they will eventually fall

This is true. But if you're smart you won't be in the states with the worst problems. This process will take decades and the left will be sucking you dry every minute. It's not like they're concerned about your retirement.

Yeah, but the Windy City still gots the Cubbies and da Blues.

And, they've got a reason to sing the blues!

There's only one solution: incorporating the suburbs and getting the city's fangs into them.

The Fed is already looking to make that happen.

Check out the new "Regionalism" initiatives.

Any residential neighborhood that features any sort of ethnic cohesion and concentration will be targeted for diversification.

If we all get government jobs, then we can all get a piece of the pie. We can all be a part of the collective. I want to be Nancy Pelosi's personal government artist. The hours are fantastic, and the pay is great.

Instead of sitting back and sniping at the nation's debt problem we should do what we can to find a way out of the problem.

My solution would be for the federal government to issue bonds at attractive rates on the international market and use the proceeds to pay off all the accumulated debt of the states, counties and cities.

And then take that paper and all the previously existing federal foreign debt paper and put it in a pile on the deck of the USS Ronald Reagan and burn it while Obama stands on the bridge giving a double finger to the world.

Maybe the Harry S. Truman just so everybody got the message.

It could work and it's not really that much different than what will happen eventually anyway.

I recall reading before Obama got in that the whole state is in trouble.

It's going to be very uncomfortable when big cities have to restructure their pension pay-outs.

" But if you're smart you won't be in the states with the worst problems. This process will take decades and the left will be sucking you dry every minute. "

Too late for me. I'm too invested now in my location. They already suck me dry, but if it gets much worse, I'll just bite down on the cyanide capsule I keep between teeth and gums at all times. Till then I'm living the vida loca, and It's Friday! Woohooooo!

Well, Tippytoes has a good crisis he can call his own.

Haz, Wow..we had the same thoughts of buying a retirement condo, having lived there in the 80's, and came to the same conclusion.

And Chicago is an HO scale of what liberal governance is doing to America.

The next step up from HO scale is O-scale.
Just sayin'

@EPR The Science & Industry museum is cool though.

Detroit has a pretty spiffy museum too.

Update: In this article about a 100 year old Chicago man with an erroneous $43,000 water bill, Mayor Rahm Emmanuel says that he will have to double property taxes in 2015 unless pension laws are changed.

And by 'changed', he means 'Chicago will contribute far less'.