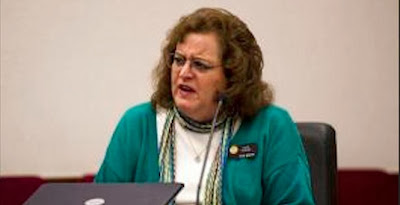 Third in a series of Colorado recalls by voters angry with unwanted firearms legislation and the heavy-handed disrespectful way the legislation was passed. Gone, but hardly contrite. Her resignation letter:

"Most Coloradans believe that going through a background check is a reasonable thing to do if it means we can keep guns out of the hands of violent criminals. Most Coloradans believe that the convenience of high-capacity magazines is less important than saving lives in tragedies like Sandy Hook, Aurora, and Columbine. Most Coloradans believe that people under restraining orders for domestic abuse should not be able to endanger those around them by keeping their guns. That's why I sponsored SB 13-197, a bill that takes guns out of the hands of domestic abusers and will save the lives of many women caught in abusive relationships. I am proud of what has been accomplished over the last year, and I believe these bills will make life better for all the people of my district and for all Coloradans.
By resigning, I am protecting these important new laws for the good of Colorado and ensuring that we can continue looking forward."

It was a close race. She won by 300 votes. The Independent candidate peeled off 3,000 votes from the Republican. She resigned so that a Democrat can slip into her vacated seat, if recalled her seat would certainly go to a Republican and with it control of the legislature.


That was cut from  a longer video, the host Jon Caldara speaks with guest reporter Todd Shepherd about how campaigners for the second recall Hudak attempt used i-pads to pre-verify signatures so that there was something like 90% accuracy or better, some remarkable figure, seems a simple enough thing to verify signatures before turning them in rather than after. They didn't need to come so close to what the law requires because so many of the signatures are solid. The point is they learned from the previous recall efforts how to counter a lot of these dirty rotten no good stinking filthy disgusting dith pickable low-down conniving underhanded activytahs that flow so naturally we've become inured and expect the lowest from them.
Posted by Chip Ahoy at 9:54 PM

Most conservative arguments are just harder to make. Not actually hard, just relatively hard compared to the leftist counter-arguments which require no mental effort at all. One exception is women and self-defense. Personally, I don't know how you gals can go through life being unarmed so much of the time. I would be terrified if more than half the population could physically restrain me, do what they want, or even kill me with their bare hands, and if I was a chick, I would definitely be hot. I especially would not live alone without a gun, even though the odds are slim you would need it. Still, there is no second chance once the sick fuck is in your house.

So I think people can actually just feel that argument like they do most points on the left. Then the left has to make the the less obvious, counter-intuitive type of arguments the right usually does.

This woman claims that a woman with a gun is 85 times more likely to be killed with it than her attacker. I think that's obvious bullshit. I can think of a couple of ways that some other stat could be twisted into that, but I'm just hitting my starter buzz right now, and I'm not in the mood to go into it. Anyone know where she got that?

I've always considered myself situationally aware. Last week at night I scanned the sidewalk before me and it was clear, lifted my key fob that unlocks the door by touch and opened it, stepped in and BAM four people all larger and much heavier than myself crowded all at once clattering through the door, I slip sideways, and they pour past me to the elevator. One looked like a cop at first glance, then on second glance the whole group were a bunch of rugged ruthless drinking chavs. Honestly it was as if they appeared out of thin air behind me like spooks, it had to be planned. I heard absolutely nothing behind me.

So couldn't the Democrats do this serially as the citizens tried to recall each replacement Dem. Seems pretty undemocratic, and a naked ploy to put the party above the citizens. Voters just need to punish the party doing this, or they are complicit in the burglary of their own house. Get tough, people - take names, and remember.

"so naturally we've become inured and expect the lowest from them."

The Anchoress is thinking about revising her cash tip policy, as a result of that hoaxing waitress I posted about on the previous post.

I'm not sure the voters in her district are going to forget this underhanded-ness. It might even come back to hurt the Governor since this is all going on with his blessing to keep the legislature in Democratic control.

2014 might not be what they were expecting a couple of years ago.

Was Evie ever named Ervin?

Her arguments are bullshit. We already have background checks. The magazine limitations are ridiculous and meaningless and do nothing to save lives. These crap laws only turns ordinary citizens into criminals.

The dems shut down debate and pushed people out of the door at the capital. Bad faith.

She is a fat ugly coward and a typical leftwing lair..
The dems will do anything for power. Anything. ...Lie cheat steal and all of it done with bad faith arguments.